This chapter “Jalebis” narrates the story of a young honest boy who on his way to school gets enticed at the sight of crisp, syrupy jalebis in the market. Unable to resist his sweet temptation, he ends up paying the school fees amount to fulfill his sweet tooth.

Meanwhile, Class 8 students can refer to the NCERT Solutions of the English Supplementary textbook – It So Happened here. All the textbook and additional exercise questions have been attempted by subject-matter experts in consideration with the latest CBSE English syllabus. Students can also explore the other important subjects of NCERT Solutions for Class 8 and score high marks in their exams. 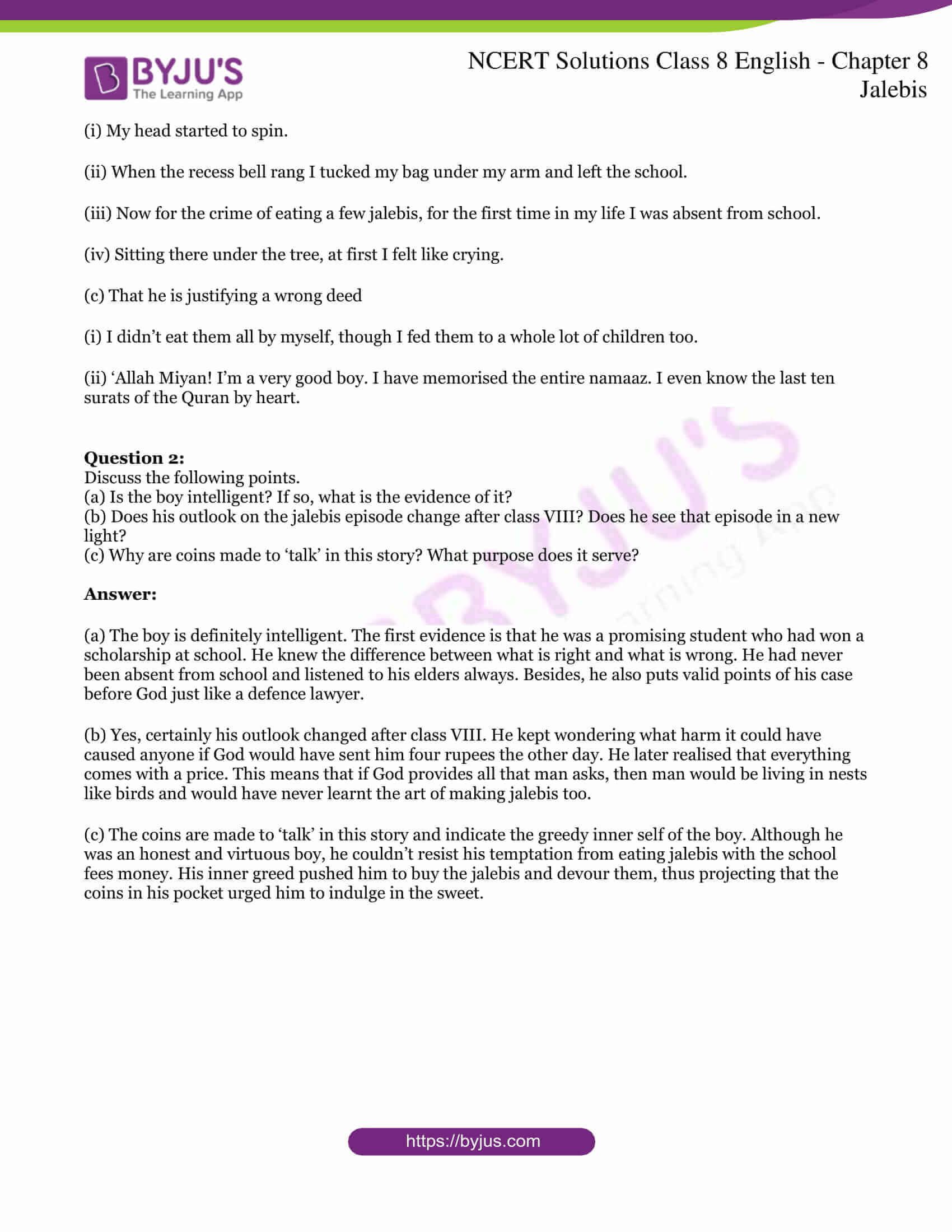 Why didn’t he pay the school fees on the day he brought money to school?

The boy did not pay the school fees on the day he brought money to school because his teacher, Master Ghulam Mohammed who collected the fees was on leave that particular day and so the fees would be collected the next day.

(i) What were the coins ‘saying’ to him?

(ii) Do you think they were misguiding him?

Why didn’t he take the coins’ advice? Give two or three reasons.

Initially, the boy didn’t take the coins’ advice because of the following reasons:

(i) What did the oldest coin tell him?

(ii) Did he follow his advice? If not, why not?

He reached home with the coins in his pocket. What happened then?

Upon reaching home, the coins in his pocket kept persuading him. When he went inside to have lunch, they began to shriek. Thoroughly fed up, he rushed out of the house barefoot and ran towards the bazaar. Unable to suppress his temptation and totally terrified, he told the halwai to weigh a whole rupee worth of jalebis quickly. The halwai opened up a whole newspaper and heaped a pile of jalebis on it.

(i) Why didn’t he eat all the jalebis he had bought?

(ii) What did he do with the remaining jalebis?

“The fear was killing me.” What was the fear?

After spending the school fees amount in buying jalebis and eating them, it made the boy realise that he had committed a big mistake. He was in complete fear of getting caught and thought that if his parents found out about his act, they would not spare him. With every breath came a burp, and with every burp, the danger of bringing out a jalebi or two; this fear was killing him.

“Children’s stomachs are like digestion machines.” What do you understand by that? Do you agree?

This means that children have an active digestive system as they perform physical activity like walking and playing games every day. The boy had popped in so many jalebis and felt his digestive system would digest it by morning.

Yes, I do agree to this statement as children do have the capacity to digest a lot of things even if they overeat sometimes.

How did he plan to pay the fees the next day?

He planned to pay the fees the next day with his monthly scholarship that he would receive on that day.

When it is time to pay the fees, what does he do? How is he disobeying the elders by doing so?

When it is time to pay the fees, the boy tucked his bag under his arm and left the school. He simply followed his nose and walked on hoping that some miracle would save him in that situation. He was so engrossed in his thoughts that soon he reached the point where the Kambelpur railway station began. The elders had warned him to never cross the railway tracks or eat sweets with one’s fees money. Hence, he had a deep sense of regret and remorse for disobeying their words.

What was the consequence of buying jalebis with the fees money?

His prayer to God is like a lawyer’s defence of a bad case. Does he argue his case well? What are the points he makes?

The boy tried very hard to please God with his requests and recited verses from the entire namaz. He said that he even knew the last ten surats of the Quran by heart. He could also recite the entire ayat-al-kursi for the Almighty right away. He deeply regretted his act of eating jalebis with the school fees money. He admitted that he made a grave mistake. He added that he wouldn’t have spent the fees money on jalebis if he was aware about the delay in scholarship that month. He also mentioned that he knew that there is no shortage of anything in God’s treasury. Even the chaprasi at his place took a whole lot of money to his home every month. Furthermore, he stated that he was the nephew of a big officer and therefore, pleaded to God to give him just four rupees. Having said all this, he prayed earnestly to Allah Miyan and argued his case like a lawyer in front of Him.

He offers to play a game with Allah Miyan. What is the game?

The game was that he would go up to the signal, touch it and return. In the meantime, God should secretly put four rupees under a big rock. Once he lifts it, he should be able to find the four rupees underneath the rock.

Did he get four rupees by playing the game? What did he get to see under the rock?

No, the boy didn’t get four rupees by playing the game with God. However, when he lifted the rock, he found a big hairy worm curling and twisting that wriggled towards him.

If God had granted his wish that day, what harm would it have caused him in later life?

If God had granted his wish that day, he would have never learnt a lesson from his mistake. He felt he would have continued doing wrong and bad deeds and that God would always save him upon persuasion.

Select and read sentences that show

That the boy is tempted to eat jalebis

1. Jalebis are meant to be eaten, and those with money in their pocket can eat them.

2. But then, these jalebis are no common sort of jalebis either. They’re crisp, fresh and full of syrup.

4. Thoroughly fed up, I rushed out of the house bare foot and ran towards the bazaar.

That he is feeling guilty

That he is justifying a wrong deed

Which is the best reference guide for Class 8 English exam preparation?

NCERT books are the best source of study material for CBSE board exam preparation.
The subject experts at BYJU’S outline the concepts in a clear and precise manner, based on the IQ level of students. If you wish to obtain an excellent score, then referring to NCERT solutions is a must. Our solution module utilizes numerous practical examples to explain all the exercise questions in a simple and easily understandable language.

Where can I download NCERT Solutions for Class 8 English?

The NCERT Solutions for Class 8 English can be referred both in online and offline mode from the BYJU’S website. A team of experts at BYJU’S have prepared the solutions for all the questions available in the NCERT textbook for Class 8 English in accordance with the latest CBSE guidelines in a simpler language for students to grasp the concepts easily.

Where can I get correct solutions for NCERT Books?

The official website for NCERT is http://ncert.nic.in/. NCERT provides students and teachers with a wide range of study materials like text books, reference books etc. You can find Correct and accurate NCERT solutions from classes 1 – 12 at BYJU’S website. The solutions are prepared with utmost care to help students understand the concepts easily and score well in their exams.