Here, we are offering you the most reliable and 100% accurate NCERT Solutions for Class 9 English Chapter 11 If I Were You. We have included answers to each and every question of the textbook Beehive in the required detail. To be a step ahead in the examinations, it is a must for the students to have a sound grip on the textbooks. To help you with that, we offer NCERT Solutions for Class 9 English that are well-structured and comprehensive.

The solutions given here are drafted by our team of subject-matter experts, as per the guidelines of the CBSE board. These will prove to be highly beneficial for students in their learning journeys. The NCERT Solutions for Class 9 can even be downloaded in printable PDF format, so that you can learn even when you are not online. 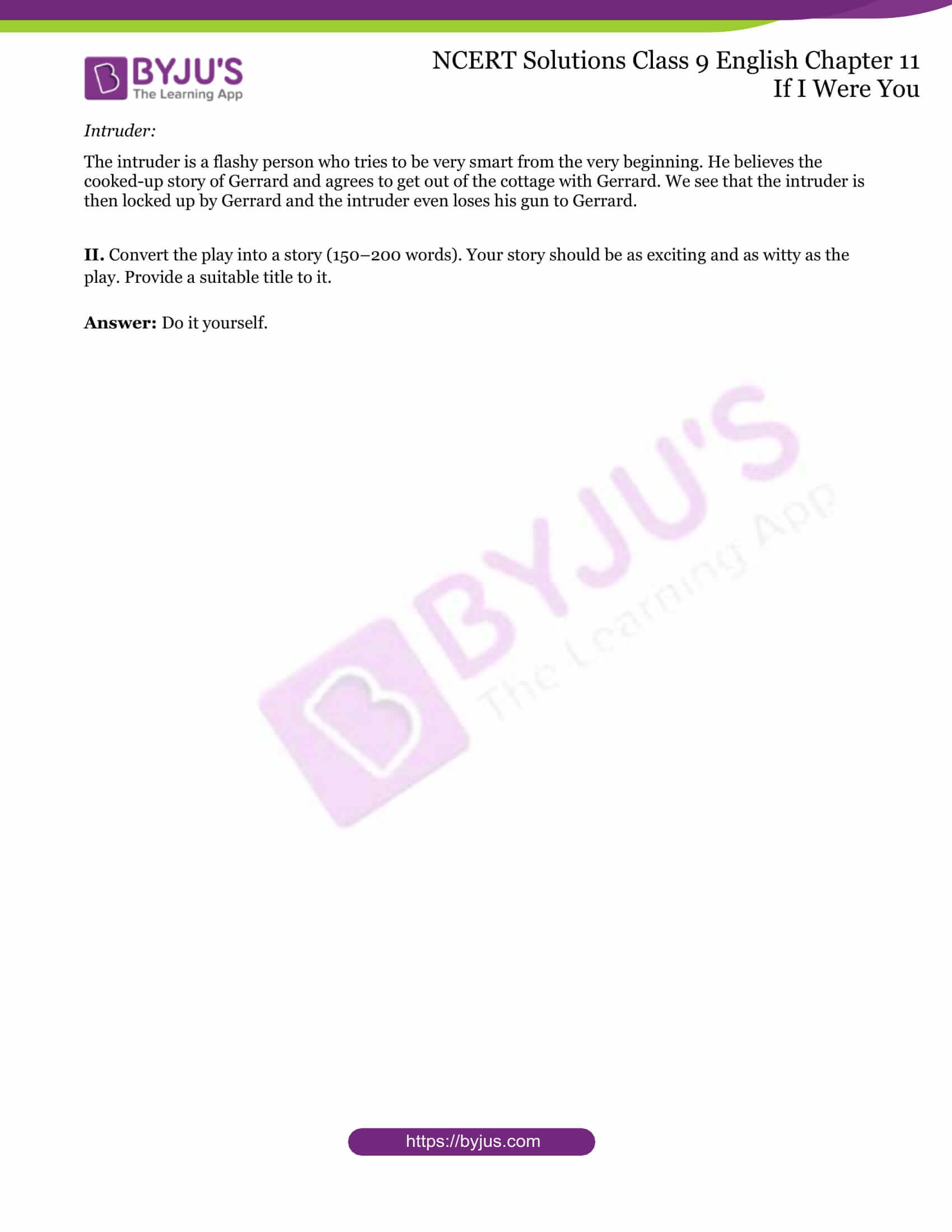 The following words and phrases occur in the play. Do you know their meanings? Match them with the meanings given, to find out.

Thinking about the Text

I. Answer these questions.

Question 1. “At last a sympathetic audience.”

(iii) Is he sarcastic or serious?

(i) Gerrard says the given statement.

(ii) He says it when the intruder asks him to talk about himself.

(iii) He is sarcastic.

Question 2. Why does the intruder choose Gerrard as the man whose identity he wants to take on?

Answer: The intruder chooses Gerrard as the man whose identity he wants to take on because Gerrard is a mystery man who phones his orders and sometimes goes away suddenly and comes back just the same.

Question 3. “I said it with bullets.”

(iii) Is it the truth? What is the speaker’s reason for saying this?

(i) Gerrard says the given statement.

(ii) It means that when he was in trouble, he had shot someone to escape.

(iii) No, it is not the truth. Gerrard says this to manipulate the intruder so that he does not kill him.

Question 4. What is Gerrard’s profession? Quote the parts of the play that support your answer.

Answer: Gerrard’s profession is that of a dramatist.

The parts of the play that support that implication are:

“In most melodramas the villain is foolish enough to delay his killing long enough to be frustrated”.

“At last a sympathetic audience!”

(ii) Why does the speaker say it?

(iii) What according to the speaker will stop Gerrard from being smart?

(i) The intruder says the given statement.

(ii) The intruder says this to scare Gerrard and know more about him.

(iii) The speaker intends to kill Gerrard. According to the speaker, when Gerrard gets to know that he came to Gerrard to kill him and steal his identity, he would become scared and stop being smart.

(ii) Why does the speaker say it?

(i) The intruder says the given statement.

(ii) The speaker says this because he had already murdered someone. So, it is not a big deal for him to kill another man. He can’t be hanged twice.

Question 7. “A mystery I propose to explain.” What is the mystery the speaker proposes to explain?

Answer: The mystery that the speaker, Gerrard, proposes to explain is why he himself is a mystery man. He explains to the intruder that he himself is a criminal who is on the run. That is the reason why he does not meet tradespeople. He says that he murdered someone and got away with it. But now he was in a trouble and that’s why his bag was all packed to escape again.

Question 8. “This is your big surprise.”

(i) Where has this been said in the play?

(ii) What is the surprise?

(i) This statement has been said twice in the play.

Once when the intruder is trying to scare Gerrard and the second time when Gerrard is explaining to him why he won’t kill him for a good reason.

(ii) The surprise in the first utterance of the statement is that the intruder expresses his intention to kill Gerrard.

The surprise in the second utterance of the statement is that Gerrard explains to him that he himself is a criminal on the run, which is why it won’t do any good to the intruder to kill him and steal his identity.

I. Consult your dictionary and choose the correct word from the pairs given in brackets.

1. The (site, cite) of the accident was (ghastly/ghostly).

2. Our college (principle/principal) is very strict.

3. I studied (continuously/continually) for eight hours.

4. The fog had an adverse (affect/effect) on the traffic.

5. Cezanne, the famous French painter, was a brilliant (artist/artiste).

6. The book that you gave me yesterday is an extraordinary (collage/college) of science fiction and mystery.

7. Our school will (host/hoist) an exhibition on cruelty to animals and wildlife conservation.

8. Screw the lid tightly onto the top of the bottle and (shake/shape) well before using the contents.

1. The site of the accident was ghastly.

2. Our college principal is very strict.

3. I studied continuously for eight hours.

4. The fog had an adverse effect on the traffic.

5. Cezanne, the famous French painter, was a brilliant artist.

6. The book that you gave me yesterday is an extraordinary collage of science fiction and mystery.

7. Our school will host an exhibition on cruelty to animals and wildlife conservation.

8. Screw the lid tightly onto the top of the bottle and shake well before using the contents.

II. Irony is when we say one thing but mean another, usually the opposite of what we say. When someone makes a mistake and you say, “Oh! that was clever!”, that is irony. You’re saying ‘clever‘ to mean ‘not clever’.

Expressions we often use in an ironic fashion are:

• Oh, wasn’t that clever!/Oh that was clever!

• You have been a great help, I must say!

• You’ve got yourself into a lovely mess, haven’t you?

We use a slightly different tone of voice when we use these words ironically.

Read the play carefully and find the words and expressions Gerrard uses in an ironic way. Then say what these expressions really mean. Two examples have been given below. Write down three more such expressions along with what they really mean.

A word can mean different things in different contexts. Look at these three sentences:

• The students are taught to respect different cultures.

• The school is organising a cultural show.

• His voice is cultured.

In the first sentence, ‘culture’ (noun) means way of life; in the second, ‘cultural’ (adjective) means connected with art, literature and music; and in the third, ‘cultured’ (verb) means sophisticated, well mannered. Usually a dictionary helps you identify the right meaning by giving you signposts.

Look at the dictionary entry on ‘culture’ from Oxford Advanced Learner’s Dictionary, 2005. (Noun, verb, adjective, adverb, synonyms, etc. are signposts which help you locate the right meaning and usage, and give information about the part of speech that the word is.)

Look up the dictionary entries for the words sympathy, familiarity, comfort, care, and surprise. Use the information given in the dictionary and complete the table.

Question 1. Imagine you are Gerrard. Tell your friend what happened when the Intruder broke into your house. [Clues : Describe (i) the intruder — his appearance, the way he spoke, his plan, his movements, etc., (ii) how you outwitted him.]

Answer: Last night, while I was on the phone, a intruder broke into my cottage. He had a gun in his hand. He was a criminal on the run. He was planning to kill me and steal my identity. He kept threatening me with the gun and asked me to tell everything about myself. I did not reveal my true profession and instead gave him a dodge. I told him that just like him, I too am a criminal and that is why killing me will not do any good to him. I told him that I was in trouble myself and had to escape. While trying to come out of the cottage, I locked him up in the cupboard and called the police. That’s how I was able to outwit him and save myself.

Question 2. Enact the play in the class. Pay special attention to words given in italics before a dialogue. These words will tell you whether the dialogue has to be said in a happy, sarcastic or ironic tone and how the characters move and what they do as they speak. Read these carefully before you enact the play.

I. Which of the words below describe Gerrard and which describe the Intruder?

Write a paragraph each about Gerrard and the Intruder to show what qualities they have. (You can use some of the words given above.)

Gerrard is a smart and humorous person. He is clever and confident. Even in a life-threatening situation, he is cool and handles the situation in an amazing way. Instead of losing his mind and getting killed by the intruder, he quickly cooks up a story of being an on-the-run criminal. He is a witty person who saves himself and gets the intruder behind bars.

The intruder is a flashy person who tries to be very smart from the very beginning. He believes the cooked-up story of Gerrard and agrees to get out of the cottage with Gerrard. We see that the intruder is then locked up by Gerrard and the intruder even loses his gun to Gerrard.

II. Convert the play into a story (150–200 words). Your story should be as exciting and as witty as the play. Provide a suitable title to it.

For the most authentic solutions to all the questions, students can refer to BYJU’S website. You can also download these NCERT Solutions for Class 9 English in PDF format for free, through the links provided. Here, we have covered answers to each and every question of the textbook Beehive. To prepare well for examinations, a sound grip on the textbooks is a must. Students can refer and easily download the solutions pdf for free.

If I Were You (Prose)

The chapter ‘If I Were You’ is a story that shows how keeping yourself calm and composed even in the worst of situations can save you from adverse consequences. The play, written by Douglas James is about a man named Gerrard. Gerrard is talking on the phone when he is alarmed by an intruder at his cottage. The intruder expresses his intention to kill him and steal his identity. How will Gerrard escape? Read the chapter to know.

You can download these NCERT Solutions for Class 9 English in PDF format for free, from the links given.

Describe Gerrad according to Chapter 11 of NCERT Solutions for Class 10 English Beehive.

According to Chapter 11 of NCERT Solutions for Class 9 English Beehive, Gerrard is a smart and humorous person. He is clever and confident. Even in a life-threatening situation, he is cool and handles the situation in an amazing way. Instead of losing his mind and getting killed by the intruder, he quickly cooks up a story of being an on-the-run criminal. He is a witty person who saves himself and gets the intruder behind bars .

What are the benefits of using the NCERT Solutions for Class 9 English Beehive Chapter 11?

The benefits of using the NCERT Solutions for Class 9 English Beehive Chapter 11 are –
1. Framed by the subject experts.
2. Chapter wise and exercise wise solutions are present in PDF format.
3. Free download option is available for the solutions.
4. Conceptual understanding is enabled among students.
5. Solutions are created according to the latest syllabus of the CBSE board.

Is it necessary to learn all the questions provided in NCERT Solutions for Class 9 English Beehive Chapter 11?

Yes, as all types of questions are important from an exam perspective you must learn all of them. By learning all the solutions you can score high in Supplementary English board exams and also can grasp concepts flawlessly.