The chapter ‘The Lost Child’ is about a little boy who is taken to a fair by his parents. He is enjoying the fair and wishes to buy a lot of things- sweets, garlands, balloons, toys, etc. He keeps lagging behind his parents every now and then because he is engaged in looking at the things in the fair with amazement. While he is looking at the roundabout swing, he realizes that he is lost as his parents are nowhere to be seen! What will he do now?

For the most authentic solutions to all the questions of the supplementary reader, you can refer here. The solutions given here are drafted by our team of subject-matter experts, as per the standards set forth by the CBSE board. The NCERT Solutions for Class 9 can even be downloaded in printable PDF format for free, through the link provided below: 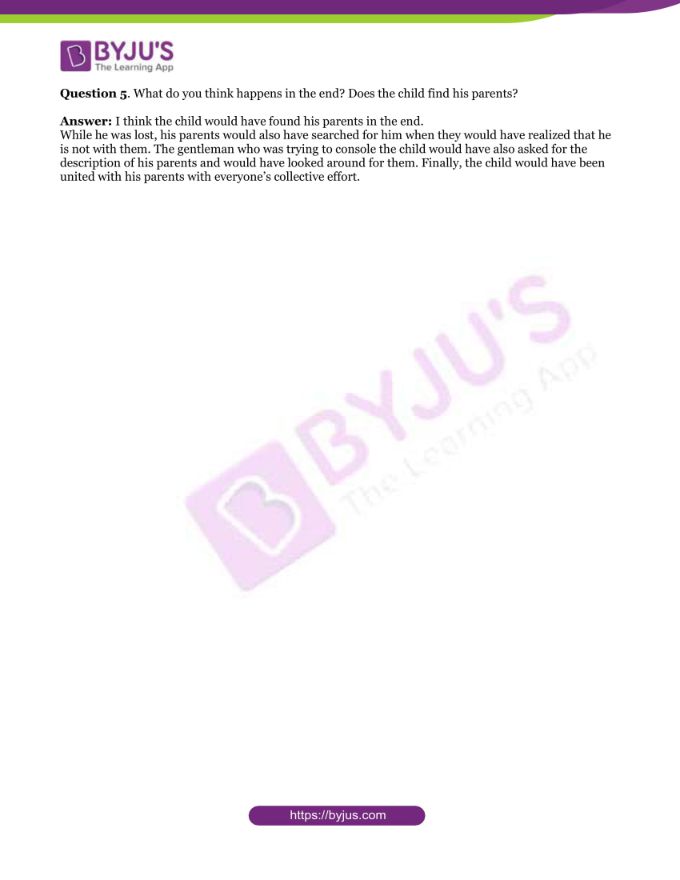 Question 1. What are the things the child sees on his way to the fair? Why does he lag behind?

He lags behind because he is fascinated by the things that he sees on his way to the fair. His parents constantly call him so that he does not get lost in the crowd. He would stop at the shops with a wish to buy them and sometimes would be amazed at the beauty of the nature. That’s why lags behind.

Question 2. In the fair he wants many things. What are they? Why does he move on without waiting for an answer?

Answer: The things that he wants in the fair are:

Question 3. When does he realize that he has lost his way? How have his anxiety and insecurity been described?

Answer: When he saw the roundabout in a full swing, he made a bold request to his parents for having a ride on it. But, there was no reply. When he turned to look at his parents, there was no one. That is when he realized that he has lost his way.

His anxiety and insecurity have been described in a very saddening and heart-warming way. When he realizes that he has lost his way, a deep cry rises within his dry throat and with a sudden jerk of his body, he runs from where he stood. His face is convulsed with fear and eyes of full of hot and fierce tears. He runs in search of his parents in all directions crying, “Mother, Father”.

Question 4. Why does the lost child lose interest in the things that he had wanted earlier?

Answer: The lost child loses interest in the things that he had wanted earlier because the only thing that he wants at that moment is his parents. He is panic-stricken and he just wants to be united with them again.

Question 5. What do you think happens in the end? Does the child find his parents?

Answer: I think the child would have found his parents in the end.