Hormones are steroids or proteins which are released and produced in one part and move to another part of the body to exhibit their effect. Through the process of signal transduction, hormones function. Antagonistic hormones oppose the actions of one another.

Often, the process of maintaining homeostasis necessitates conditions to be restricted to a marginal range. When the state surmounts the upper limit of homeostasis, a particular action, typically hormone production, is triggered. When conditions are stable, the production of hormones is discontinued. In the event of conditions going beyond the lower limit of homeostasis, typically second hormone production is triggered. Those hormones which serve to get back the conditions of the body to standard limits from the contrary extremes are referred to as antagonistic hormones. 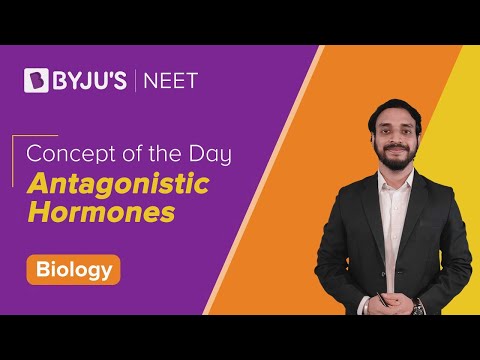 PTH from the parathyroid glands raises Ca ++ levels in the blood by increasing the absorption of calcium in intestines and the reabsorption in kidneys, triggering the release of Ca++ from the bones. Calcitonin generates the opposite effect by suppressing the disintegration of bone matrix and reduces the release of calcium in blood.

Insulin and glucagon are antagonistic hormones. Alpha cells secrete glucagon, beta cells secrete insulin. Glucagon facilitates the release of glucose into the bloodstream from the stored glycogen through a process of signal transduction. Insulin facilitates the elimination of glucose from the bloodstream to store as glycogen through signal transduction.

The association of the hormone to the receptor proteins alters the molecular structure, which brings a cellular response. It is deemed that steroid hormones enter the cytoplasm before arriving at the target proteins, while the protein hormones associate with the receptor proteins on the surface of plasma membranes.

This was a brief on Antagonistic Hormones. Learn more about related topics, at BYJU’S.