What Is Floral Formula?

Floral formulae are symbolic as well as numeric representations of different parts of a flower. It renders information on the type and number of organs, symmetry type, level of ovary, presence of fusions, and interrelationships of different floral parts which are corolla, calyx, androecium, and gynoecium. 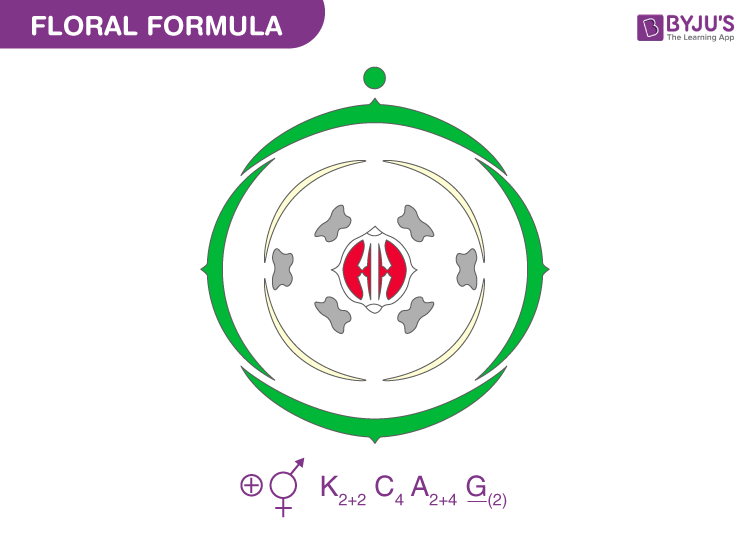 Floral formulae are a system to represent a flower’s structure using specific numbers, letters, and symbols, hence it is a simple way to present salient features of a flower. It portrays the number of parts, floral symmetry, connotation and adnation, ovary position and insertion. These formulae are beneficial to remember the characteristics of different angiosperm families. It mainly consists of 5 symbols which indicate:

On the basis of the position of the corolla, calyx and androecium corresponding to the ovary on the thalamus, flowers can be described as hypogynous, epigynous and perigynous.

The gynoecium in the hypogynous flower occupies the highest position, other parts are located below it. Here the ovary is said to be superior. Such positioning of the ovary can be observed in brinjal, china rose and mustard flowers.

The margin of the thalamus in epigynous flowers, shoots upwards enveloping the ovary fully, thereby uniting with the other floral parts hence arising above the ovary. This is why it is said to be inferior as seen in the flowers of ray florets of sunflower, cucumber, and guava.

Perigynous is the condition observed in flowers, wherein the gynoecium is located in the center and floral parts are situated on the rim of the thalamus, at almost the same level. Ovaries here are half inferior as seen in flowers of peach, rose and plum.

Floral formulae are used to describe a flower using some signs and symbols to designate different parts of a flower. Some of the different symbols used are as follows:

The number of floral parts are indicated along with symbols at the base of a floral diagram and their union by showing a bracket.

When one begins to write the formula, start with bract and bracteole, moving to symmetry and sexuality of flowers and then specifying the floral parts – calyx, corolla, androecium, and gynoecium. To designate the numbers of parts of each structure, figures such as (1, 2, 3, 4, 5) are used after corresponding symbols of the floral part such as K (calyx), C (corolla), A (androecium) and G (gynoecium).

If the parts of the flower are fused, numeral value is placed in the bracket, but if parts are free, the value is placed as it is. If it is a bilabiate structure, the number of parts is split into two values based on parts in the upper and lower lip.

Joining the top of symbols of different whorls by an arc or curved line indicates the adnation of members. A vertical line between symbols of two floral cycles indicates a break in the alternation of parts of any two successive floral cycles. Whereas placing a horizontal line in front or above the symbol of gynoecium represents the position of the ovary if it is half inferior, superior, or inferior. What is androecium and gynoecium?

What are sepals and petals?

Petal is a type of modified leaf that is brightly colored. A collection of petals is referred to as a corolla. The petals are accompanied by another leaf modification called the sepals. A collection of sepals is termed as calyx.