The chemical process of photosynthesis which takes place independent of light is referred to as dark reaction. It occurs in the stroma of the chloroplast. This dark reaction is enzymatic purely, and compared to the light reaction, is slower. Dark reactions also take place when light is present. The sugars in the dark reactions are synthesized from carbon dioxide. The energy-deprived CO2 is fixed to energy-rich carbohydrates utilizing energy-rich compound, ATP and the assimilatory power, the NADPH2 of light reaction. The process is referred to as carbon assimilation or carbon fixation.

M. D. Hatch and C. R. Slack first outlined this metabolic pathway in depth. In this, the carbon dioxide is added first to the phosphoenolpyruvate by the action of the enzyme PEP carboxylase. Thus, producing the four-carbon compound in the mesophyll cells, which is transported later on to the bundle sheath cells to release the carbon dioxide to be used in the Calvin cycle.

C4 plants are plants possessing a C4 cycle. Such plants are inclusive of dicots and monocots, the C4 cycle is evident in the Chenopodiaceae, Gramineae and Cyperaceae family. 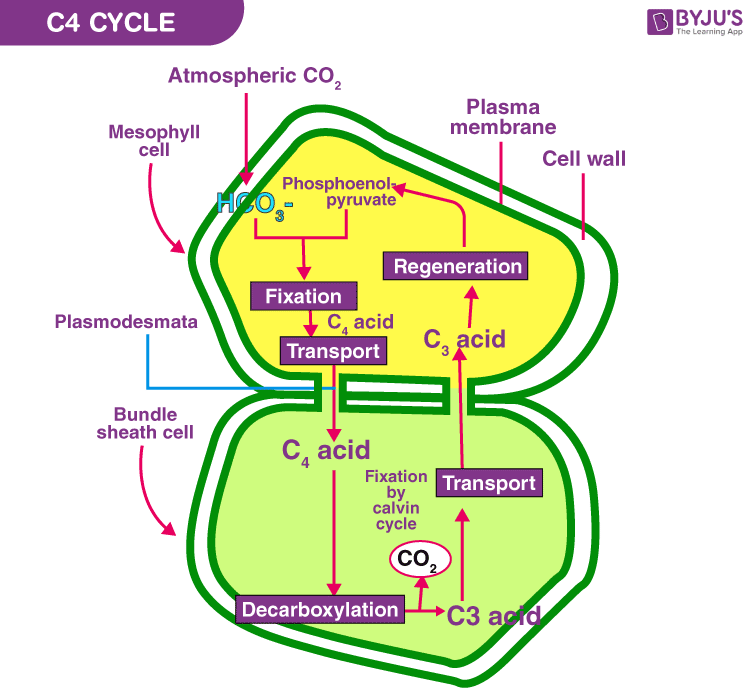 To fix carbon dioxide, this pathway is the alternate to the C3 cycle. Here, the first formed stable compound – oxaloacetic acid is a 4 carbon compound, hence the name C4 cycle. This pathway is a common sight in several grasses, maize, sugarcane, amaranthus, sorghum. The C4 plants depict a different kind of leaf anatomy (Kranz anatomy).

The chloroplasts are dimorphic and in the leaves, vascular bundles are wrapped by a bundle sheath of larger parenchymatous cells. Such bundle sheath cells possess chloroplasts, which are larger, containing starch grains, lacking grana while the chloroplasts in the mesophyll cells always possess grana and are smaller. The bundle sheath cells appear as a wreath or a ring while cells are larger. This characteristic leaf anatomy of the C4 plants is referred to as Kranz Anatomy. In German, Kranz corresponds to the wreath, hence the name Kranz Anatomy.

Occurs in the chloroplasts of the mesophyll cells. A 3-carbon compound, Phosphoenolpyruvate, collects carbon dioxide and in the presence of water, transforms to 4 carbon oxaloacetate. The enzyme phosphoenolpyruvate carboxylase catalyzes the reaction.

Readily, oxaloacetate disintegrates into 4 carbon malate and aspartate. The enzyme involved in the reaction is transaminase and malate dehydrogenase. The compounds formed diffuse into the sheath cells from the mesophyll cells.

The pyruvate molecules are moved to the chloroplasts of the mesophyll cells wherein, in the presence of ATP, it is phosphorylated for the regeneration of phosphoenolpyruvate. Pyruvate phosphokinase catalyzes the reaction and phosphoenolpyruvate is regenerated.

In this pathway, the C3 and C4 cycles of the carboxylation are associated as a result of the Kranz anatomy of the leaves. Compared to C3 plants, the C4 plants are more efficient in photosynthesis. Phosphoenolpyruvate carboxylase enzyme of the C4 cycle is seen to possess more affinity for carbon dioxide compared to ribulose diphosphate carboxylase of the C3 cycle when it comes to fixing molecular carbon dioxide in the organic compound at the time of carboxylation. Different Reactions Of C4 Cycle or Hatch and Slack Cycle

Following reactions occur in the Hatch and Slack Cycle –

In Chloroplast of Mesophyll Cells

The PEP (phosphoenol pyruvic acid), the carbon dioxide acceptor combined with carbon dioxide forming a 4-carbon acid oxaloacetic acid with the action of the enzyme PEP carboxylase. At this juncture, a water molecule is required, a molecule of phosphoric acid is released.

Using light generated NADPH+H+, oxaloacetic acid is reduced to malic acid in the presence of the enzyme malic dehydrogenase.

In the presence of the enzyme aspartic transaminase, this oxaloacetic acid could also be converted into aspartic acid.

Aspartic acid and malic acid, the C4 acids are then transported to the chloroplasts of the bundle sheath.

The malic acid in the bundle sheath experiences oxidative decarboxylation to produce pyruvic acid and carbon dioxide with the presence of the malic enzyme.

Pyruvic acid is moved back to the mesophyll cells wherein it is phosphorylated to the phosphoenol pyruvic acid with the action of the pyruvate phosphate dikinase enzyme.

The role of this pathway is to render carbon dioxide to the RPP pathway and for the refixing of any carbon dioxide which originates from photorespiration. As a result, it decreases the energy loss which occurs in the C3 plants as a result of the oxygenase action of the RuBisCO enzyme. It aids in justifying the increased growth rates seen in the C4 plants in some conditions.

Ever since the C4 pathway has been discovered, the likelihood of changing economically important plants into C4 plants has been taken into consideration. Herbicides is another significant stream to develop research with C4 plants.

This was a brief on Hatch and Slack Cycle. Explore related articles on NEET at BYJU’S.