Laws of motion MCQs for NEET

1. A particle of mass m is given an impulse such that the velocity of the particle changes from v1 to v2. The impulse is equal to

(a) A body can be accelerated by frictional force

(b) There can be zero friction

4. Consider a car that overturns while taking a turn. Select the option that is experienced by the wheels of the car.

(a) First, both inner, as well as the outer wheel, leave the ground

(b) First, the inner wheel leaves the ground

Answer: (b) First, the inner wheel leaves the ground

5. Let two bodies be with masses 2kg and 5kg respectively. Let these bodies be at rest with the same force acting on them. Calculate the ratio of times that is required by both the bodies to reach the final velocity.

8. Let A, B, and C be the three blocks of mass 2kg each. These blocks are hanging over a pulley with the help of a string. What is the tension produced by the string connecting B and C? 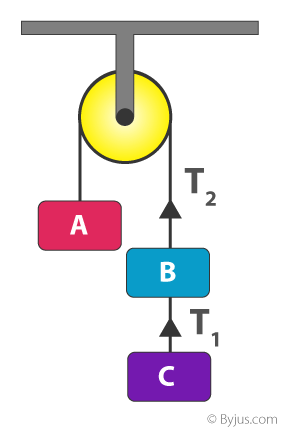 9. Consider three masses of 1kg, 3kg and 6kg which are connected to each other and are placed horizontally on the table. Calculate the acceleration of this system. Consider g = 10m/s.

10. From the following diagram, select the correct diagram when a vessel containing water is given a constant acceleration towards the right along the straight line.

12.Which of the following should be constant for a body to have a constant momentum?

Answer: (d) All of the above

Stay tuned with BYJU’S to learn more about other Physics concepts related to NEET MCQs.