What is Biomass Pyramid?

The relationship between numbers, biomass, energy or bio productivity of different trophic levels in an ecosystem can be represented by a pyramid known as the ecological pyramid or Eltonian pyramid. The ecological pyramids show the energy flow in the system.

A biomass pyramid is the representation of total living biomass or organic matter present at different trophic levels in an ecosystem.

Biomass is calculated as the mass of living organisms present at each trophic level in a given sample size. It can be represented as dry weight in grams or calories per unit area. A bomb calorimeter is used to measure biomass.

Trophic level is the specific place that a living organism occupies in a food chain.

In a biomass pyramid, producers (1st trophic level) are at the base, followed by herbivores (primary consumers) and then carnivores (secondary and tertiary consumers) at the top.

The pyramid of biomass shows the flow of energy from producers to consumers. We know that only 10 per cent of the energy gets transferred to the next trophic level and the rest is either utilised for metabolic processes or excreted out.

A biomass pyramid shows the efficiency of energy transfer at each trophic level. It can be upright or inverted. Marine ecosystems show inverted biomass pyramids.

Let us see the example of biomass pyramids in the terrestrial ecosystem and the marine ecosystem to understand the reason for the difference.

Biomass Pyramid of a Grassland Ecosystem

The pyramid of biomass in a grassland ecosystem is upright. 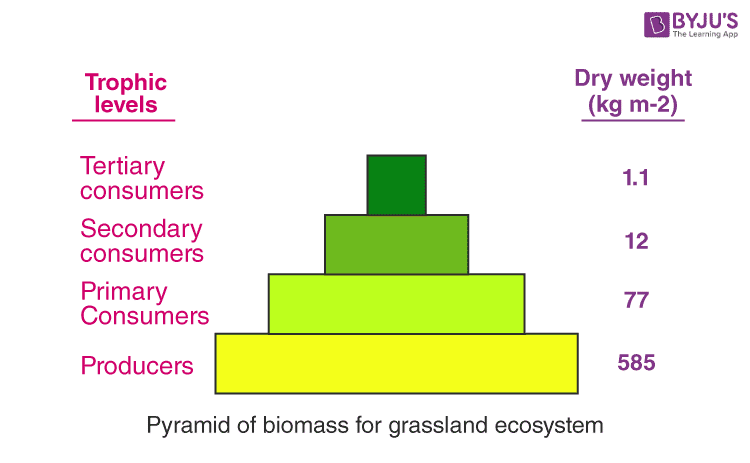 Biomass Pyramid of a Tree Ecosystem

The biomass pyramid is a better representation of energy flow as compared to the number pyramid. E.g. in a tree ecosystem, the number pyramid does not show a perfect pyramid as one oak tree supports hundreds of insects, which are then consumed by less number of birds.

Here the biomass pyramid is better represented and is upright.

Biomass Pyramid of a Marine Ecosystem

The biomass pyramid of aquatic ecosystem is inverted. Here the biomass of primary producers is much less than the zooplanktons, which is less than the small fish and the big fish having the maximum biomass. 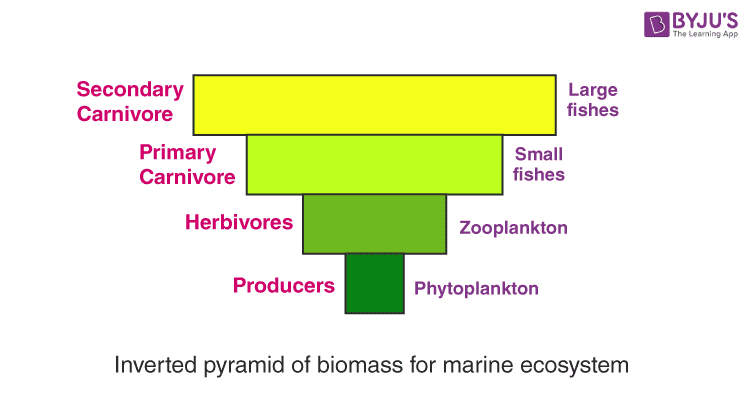 You may wonder how this is possible, how the fewer phytoplanktons can provide sufficient energy flow in the ecosystem.

It is due to higher reproducibility and shorter lifespan of phytoplanktons, that even though at any point of time their biomass is less, they frequently replenish to cater to more increased need by zooplankton and larger fish.

To know more about Biomass Pyramid, watch the video given below: Test your Knowledge on Pyramid Of Biomass Example
Q5