tRNA or transfer RNA is a type of RNA, which helps in the synthesis of protein from mRNA. tRNA functions as an adapter molecule during the translation process. It was earlier known as soluble RNA or sRNA. As an adapter, it links the amino acids to nucleic acids. It carries the amino acid to be added in the peptide chain and also deciphers the codon for the same in the mRNA molecule.

Let’s learn about its structure.

The tRNAs are generally 76-90 nucleotides long. Each amino acid has specific tRNAs. Stop codons are not recognised by any tRNAs. The secondary structure of tRNA looks like a clover leaf and tertiary structure is like an inverted ‘L’ shape. The folded structure is formed due to hydrogen bonding between complementary bases. 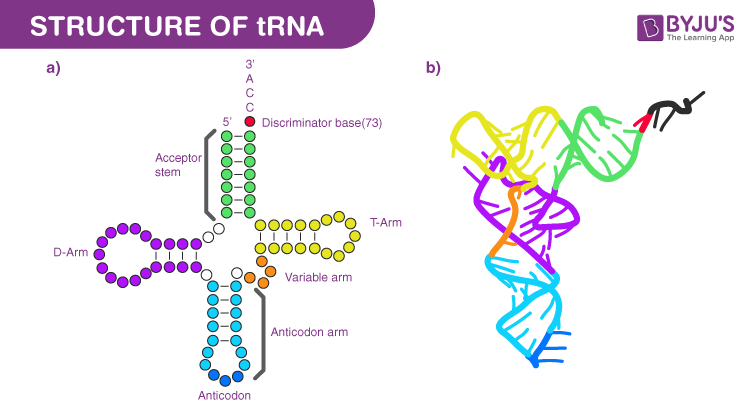 The secondary folded structure of tRNA has three hairpin loops, which give it an appearance of three-leafed clover. The main constituents of tRNA are:

It is formed by the base pairing of 7-9 nucleotides of 5’ terminal and 3’ terminal. The 5’ terminal has a phosphate group and the 3’ ends with a specific sequence of CCA or CCA tail. The amino acid attaches to the 3’ hydroxyl group of the acceptor arm.

The aminoacylation of tRNA or charging of tRNA is the first step of the translation process. The enzyme aminoacyl tRNA synthetases catalyse the reaction.

D arm has a stem of 3-4 base pairs and it ends in a loop called D loop as it generally contains dihydrouridine, a modified nucleotide.

It has a 5 base pair long stem. It has an anticodon loop, which contains the complementary codon (3 nucleotides sequence) present on mRNA for the amino acid it carries. These unpaired bases of anticodon loop pair with the mRNA codon. Each codon is identified by a specific tRNA.

The T arm consists of a stem of 4-5 bp and a loop containing pseudouridine, modified uridine.

It is present between the TΨC loop and the anticodon loop. Its size varies from 3-21 bases. It helps in the recognition of the tRNA molecule.

What is the function of tRNA?

tRNA acts as an adapter molecule for linking amino acids to its specific codon in the mRNA template. Thus it helps in protein synthesis by decoding the mRNA sequence.

What is the difference between tRNA and mRNA?

Where is tRNA located?

tRNA (transfer RNA) and rRNA (ribosomal RNA) are located in the cellular cytoplasm. Both are involved in the protein synthesis process.