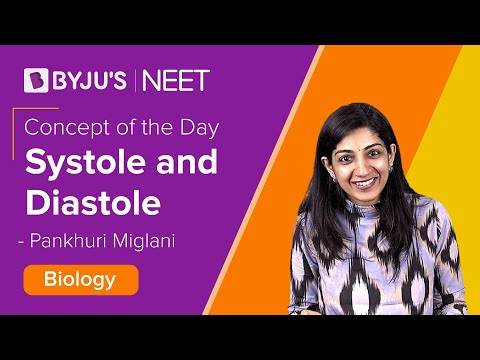 The electrical events taking place are action potential while the mechanical events include volume, pressure and sound changes.

Duration of the cardiac cycle

Calculation of the duration of one complete cardiac cycle: duration – 60/HR

The duration is inversely proportional to the HR

The two phases of the cardiac cycle are –

Typically, the total duration of the cardiac cycle with HR = 75 bpm is 0.8 seconds

Physiologically, the contraction of both the atria precedes that of both the ventricles. This contraction sequence enables the separation of the right and the left heart (functionally at least) as two distinct circuits. The cardiac cycle events can be split into diastole and systole. The diastole indicates ventricular filling, while the systole indicates ventricular ejection or contraction. Though with varying pressures, the systole and diastole occur in both the right and left heart.

On the other hand, systole starts when the tricuspid or mitral valve closes and ends with the closing of the aortic valve. This phase of the cardiac cycle indicates ventricular contraction, which forces blood into the arteries. During the contraction of the ventricles, the pressure in the ventricles starts becoming greater compared to that of the adjacent blood vessels, valves allow the blood to flow out.

The cardiac cycle occurs through these stages –

The different phases hence are –

The following table gives a brief description of the phases –

Normally, the systolic blood pressure in an individual quietly sitting is 120 mmHg or below.

This pressure is exerted by blood in the arteries between heartbeats – when the heart is not ejecting blood into the arteries actively.

Normally, the diastolic blood pressure when sitting quietly is 80 mmHg or below. This blood pressure often increases even when at quiet rest, when there is hypertension.

Let us take a look at some other differences –

This was a brief on Systole and Diastole. Learn other related NEET concepts at BYJU’S.