A conservative force is a force done in moving a particle from one point to another, such that the force is independent of the path taken by the particle. It depends only on the initial and final position of the particle. Gravitational force and elastic spring forces are two such examples of conservation forces.

What is Conservative Force?

As the name suggests, conservative force conserves energy. It follows the law of conservation of energy. Many forces in nature that we know of like the magnetic force, electrostatic force, gravitational force, etc. are a few examples of a conservative force. Let us understand the concept better with the help of the following example.

Gravitational force acting on a particle

In the given image, the gravitational force acting on the particle has a magnitude equal to mg, where m is the mass of the substance and g is the acceleration due to gravity. The particle moves from point A to point B, and its vertical displacement is given by Δh. The blue curve in the image represents the arbitrary path traveled by the body due to the influence of other forces acting on the body. But the arbitrary path is of no consideration to the force of gravity as it is unaffected by them and therefore can be treated independently. The force of gravity is only dependent on the vertical displacement.

The total work done by gravity on the body is given as follows:

No matter how complicated the path taken by the particle might be, we can easily find out the work done by gravity on the particle using the above expression just by knowing the vertical displacement. From this, we can conclude that the gravitational force doesn’t depend on the path taken but only depends on the initial and final position. Hence, the gravitational force is a conservative force.

If a force has the following properties, then it is said to be a conservative force.

What is Non-Conservative force? 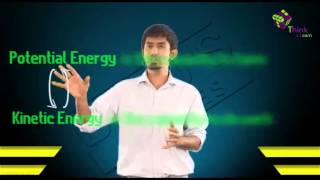 Stay tuned to BYJU’S to learn more interesting concepts like conservation of mechanical energy. If you wish to learn more physics concepts with the help of interactive video lessons, download BYJU’S – The Learning App.