To convert the given galvanometer of known resistance and of the known figure of merit into an ammeter of the desired range and to verify the same.

Following are the materials required:

For the conversion of the galvanometer into the ammeter, shunt resistance is required. Following is the formula:

Where I is the range of conversion 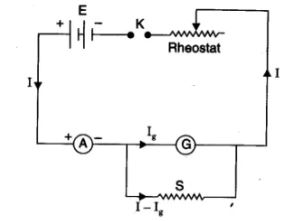 The shunt resistance S has a small value such that the range is not available in the resistance box. To obtain the value of this small resistance, wires of copper, manganin, etc are used with suitable diameter and length.

The resistance of the galvanometer, G =

The figure of merit, k =

Number of divisions in the galvanometer scale, n =

Range of conversion, I =

Least count of the galvanometer converted into an ammeter = I/n =

Table for the verification for converted ammeter

The conversion is perfect as the difference between the actual and measured value of currents is very small.

To learn about galvanometer to ammeter conversion, click on the video below. 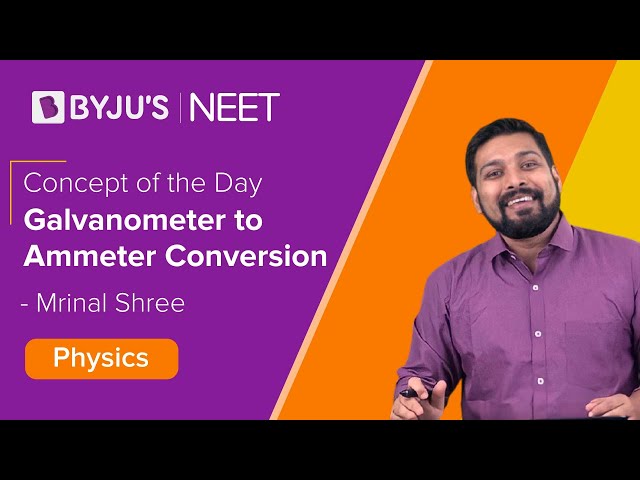 Ans: A galvanometer is defined as a device which is used for detecting feeble electric currents in the circuits.

Q3. Why zero is placed in the middle of the galvanometer?

Ans: Zero is placed in the middle of the galvanometer so that the needle deflects on both sides.

Q4. Is there a positive and negative terminal in the galvanometer?

Ans: There is no positive and negative terminal in the galvanometer. The needle can deflect on either side of the zero.

Q5. What is the other name of the moving coil galvanometer?

Ans: An ammeter is defined as a device for measuring large electric currents.

Q7. How ammeter should be placed in an electric circuit?

Ans: Ammeter should be placed in series in an electric circuit.

Q8. Why is the ammeter placed in series?

Ans: Ammeter is placed in series so that the entire current to be measured is passed through it.

Stay tuned with BYJU’S to learn more about Physics experiments and other concepts.

Test Your Knowledge On To Convert Given Galvanometer Into Ammeter Of Desired Range With Verification!
Q5