To find the focal length of a convex lens by plotting graphs between u and v or between 1/u and 1/v.

To find the focal length of a convex lens by plotting graphs between u and v or between 1/u and 1/v.

From this equation, the focal length is,

Calculation of the focal length by the graphical method:
1) u-v Graph
Choose a suitable but the same scale to denote v along the Y-axis and u along X-axis. As per sign conventions, v is positive, and u is negative. Plot the points for different rates of v and u from the observation table in the second section. The graph is a rectangular hyperbola, as represented in the graph between u and v.

Draw a line OA creating an angle of 45° with either axis bisecting ∠YOX’ and reaching the curve at point A. Draw AC and AB perpendicular on the Y and X’-axis, respectively. The values of v and u are the same for point A. The coordinates of point A should be (2f, 2f), as for a convex lens, when v=2f, u=2f. 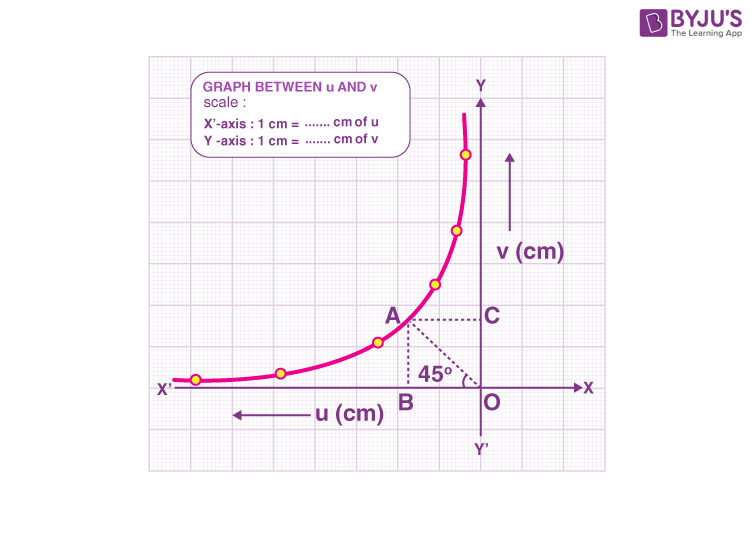 2) Choose an apt but the same scale to denote 1/u along the X’-axis and 1/v along the Y-axis. As per sign conventions, 1/u is negative, and 1/v is positive. Plot the points for varied sets of values of 1/u and 1/v from the observation table. The graph evolves to be a straight line as represented in the graph between 1/v and 1/u.

The straight-line slices the two-axis OY and OX’ at an angle of 45° at points Q and P, respectively, creating equal intercepts on the axis. Calculate the distance between OQ and OP. Another u-v Graph (same as a concave mirror)

Choose an apt but the same scale to denote v along the Y-axis and u along the X’-axis. Note the points at distances v1, v2, v3,……. etc., along the OY-axis for various sets of observations from the resulting table.

Draw KM and KL perpendicular on the Y-axis and X’-axis, respectively. The focal length of the convex as calculated from 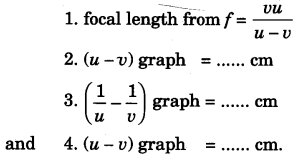 1) What is meant by focal length?
Focal length is the length from a mirror or a lens to the given focal point.

4) What is meant by an optical centre?
The optical centre is generally stated as the central point of the given lens, along which a light ray passes without experiencing any deviation.

5) What is the general formula for finding the focal length?

This experiment is one of the important experiments in Class 12 Physics Practicals.