To study the relationship between force of limiting friction and normal reaction and to find the coefficient of friction between a block and a horizontal surface.

What is sliding friction?

Sliding friction is known as the friction between two surfaces when the bodies are sliding over them. It is also known as kinetic friction. Examples of sliding friction are as follows:

What is force of sliding friction?

Force of sliding friction is the least force required to make a body slide over the surface. 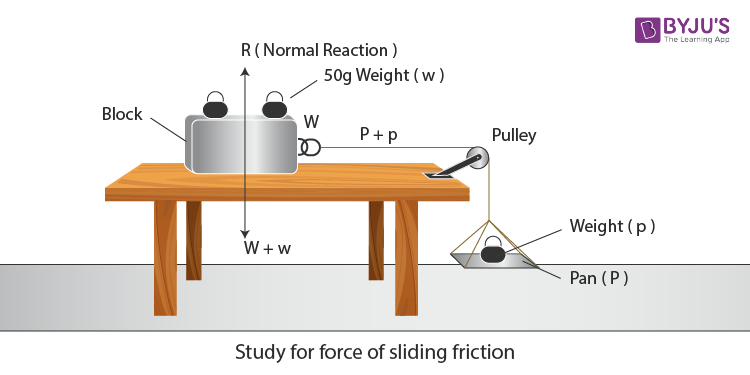 Total weight pulling the block and weights gives the value of the force of sliding friction.

Plot a graph between normal reaction R and limiting friction F, taking R along x-axis and F along the y-axis.

The graph comes to be a straight line as shown below: 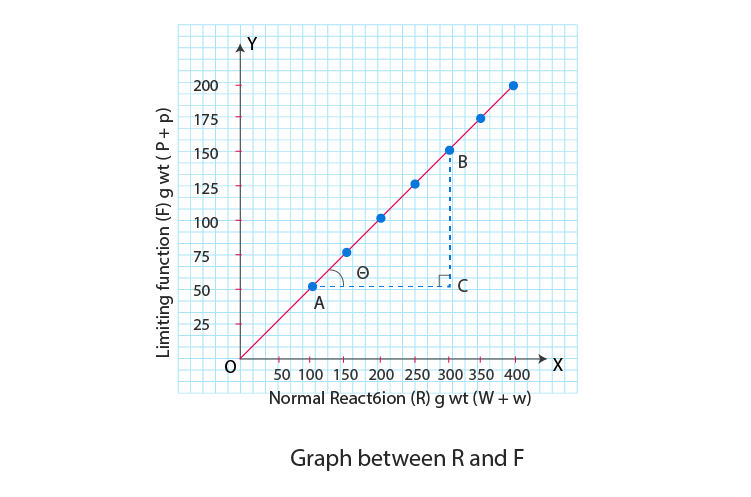 It is found that as the total weight pulled increases, the force of limiting friction also increases. The increase is in direct proportion.

The constant ratio of FIR is called the coefficient of friction (p). It can be calculated by finding the slope of the graph.

Hope you have learned about the relationship between the force of limiting friction and normal reaction. Stay tuned with BYJU’S to learn more about other Physics related experiments.

Why is the thread part between block and pulley kept horizontal?

It is kept horizontal for the equal distribution of the total weight of pan and weights.

Why is a frictionless pulley being used?

By using a frictionless pulley the overall effective value can be reduced.

Why do roads become slippery after rains?

Friction between the feet and road reduces when there is a thin layer of rainwater between them. So the roads become slippery after rains.

Why are brake surfaces kept flat?

Give some examples for sliding friction

Give some examples for sliding friction

Examples for sliding friction are:

Test Your Knowledge On To Study The Relationship Between Force Of Limiting Friction And Normal Reaction And To Fill The Coefficient Of Friction Between A Block And A Horizontal Surface!
Q5