The answers are provided for all the questions of Chapter 7 Physics of RBSE Class 12. Students can go through these questions to understand the concepts better and score well in the board examination and entrance examinations for various professional courses. These solutions are provided by the team of experts to provide the best and accurate solutions to the questions. Do check BYJU’S RBSE Class 12 solutions page to get the answers for textbook questions of all subjects.

Q3: The magnetic field at the centre of a circular current coil is Bo. The magnetic on the axis at a distance equal to the radius of the same coil is B. The ratio B/Bo will be

Q5: A galvanometer of resistance G, requires 2％ of the main current as current for full-scale deflection. The value of shunt will be

Q1: Name the various sources to generate the magnetic field.

Q2: Write the dimensional formula and unit of the magnetic field.

Q3: Which fields are generated by moving charge?

Q4: A charge q enters in a direction of

Answer: Force acting on the charge

The path of the particle will be circular

One Ampere current is the constant current maintained between two straight parallel conductors of infinite length at 1 metre apart and kept in the vacuum of negligible circular cross-section, would produce between these two conductors a force equal to 2 x 10-7 N/m of length.

Q6: What will be the direction of the magnetic field if a proton is moving vertically upwards and the magnetic force acting on it is in a horizontal plane towards the north?

Q7: A charged particle does uniform motion in a uniform magnetic field then how would be the path of the particle?

The path of the particle will be linear.

Q8: On any circular coil a constant voltage battery is connected at the diameter ends. What would be the magnetic field at the centre of the coil?

The magnetic field at the centre of the coil will be zero.

Q9: In a current-carrying coil of radius R and having N turns is opened and made into a straight long wire. Then the magnetic field at a distance R would be how many times of the value of the centre of the coil?

The magnetic field at the centre

Q10: What will be the distance between two points of inflations of a Helmholtz coil?

It is equal to the radius of the coil.

Q12: In a long tube of copper having an internal radius R, I current is flowing. Calculate the magnetic field inside the tube.

The magnetic field inside the tube is zero.

Q13: Why are magnetic poles of a moving coil galvanometer made of concave shape?

In order to produce a radial magnetic field magnetic poles are made in a concave shape.

Q14: How is the current sensitivity of a galvanometer increased?

The sensitivity of a galvanometer can be increased by taking a soft iron core or by increasing the number of turns in the coil.

Q15: What will be the position of the magnetic field and the coil of a galvanometer when it is in equilibrium position?

The plane of the coil and magnetic field will be perpendicular.

Q16: Why is cyclotron not used to accelerate light charged particles?

When the energy of the light charged particle is increased there is an increase in the mass of the particle due to relativistic effect.

Q17: Which device will you use to produce a uniform magnetic field?

The device used is Helmholtz’s coil.

Q18: How does the period of revolution of a charged particle depend on the speed and radius of a circular path inside “Dee” of the cyclotron?

The time period will remain constant.

Q19: Write the expression for the high resistance used to convert a galvanometer into

Ig is the current required for full-scale deflection

V is the range of the voltmeter

Q1: Write down the conclusion from Oersted’s experiment.

The vector form of Biot-Savart’s law is given by

Q3: Explain the two laws to find the direction of the magnetic field produced by electric current.

(i) Snow rule: According to snow rule, if the electric current is flowing from south to north in a conducting wire, the needle in the magnetic compass deflects in the west direction.

Q4: A charge enters a uniform magnetic field at an angle (0くθく90°). What will be the path of the charge? Also, find its pitch.

The path will be straight due to Vcosθ and circular due to Vsinθ. Therefore, the resultant path will be helical.

The radius of the helical path

The time period of the circular motion is given by The frequency value is the inverse of Time period

Pitch of the helical path 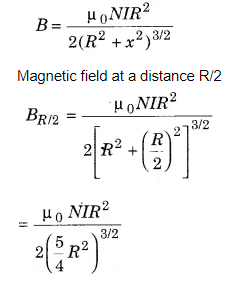 Magnetic field at the centre is

Q6: Show how a small current loop behaves like a bar magnet?

Q7: What is the circulation of the magnetic field? Please explain

Circulation of current means if the field B is directed along the tangent to every point on the perimeter L of a closed curve and its magnitude is constant along the curve. Then BL=μ0I

Q8: What is the difference in the behaviour of a solenoid and bar magnet?

Any two current-carrying conductors when placed near each other, will exert a magnetic force on each other. Consider the system shown in the figure above. Here, we have two parallel Current carrying conductors, separated by a distance ‘d’, such that one of the conductors is carrying a current I1 and the other is carrying I2. We can say that conductor 2 experiences the same magnetic field at every point along its length due to conductor 1. The direction of magnetic force is indicated in the figure and is found using the right-hand thumb rule. The direction of the magnetic field, as we can see, is downwards due to the first conductor.

From the Ampere’s circuital law, the magnitude of the field due to the first conductor can be given by,

Similarly, the force on a segment of length L of the conductor 2 due to conductor 1 can be given as,

We see that conductor 1 experiences the same force due to the conductor 2 but the direction is opposite. Thus,

Thus, we can say force per unit length on two parallel current-carrying conductors is

Q10: Show the period of half revolution of a positive charge in “Dee” of a cyclotron does not depend on the radius of the circular path.

The radius of the path

The time taken to complete half-circle is

Q11: Explain the principle of the cyclotron.

Answer: Principle of the Cyclotron

The Principle of Cyclotron is that when a particle is moving normal to the magnetic field it will experience a Lorentz force because of which the particle moves in a circular path. This is explained in detail below

Q12: What is sensitivity and figure of merit of a galvanometer? How are they related to each other?

Sensitivity is the ratio of change in deflection of the galvanometer to the change in current/voltage in the coil.

Figure of merit is the ratio of the full-scale deflection current and the number of graduations on the scale of the instrument. It gives the value of the current required to produce a unit deflection in the galvanometer.

Figure of merit is inversely proportional to the current sensitivity of a galvanometer.

Q13: Find the expression for the resistance connected in parallel to convert a galvanometer to an ammeter. Let us add 1 on both sides of the equation Q14: A rectangular current loop EFGH is placed in a uniform magnetic field, as shown in the figure A moving coil galvanometer is an instrument which is used to measure electric currents. It is a sensitive electromagnetic device, which can measure low currents even of the order of a few microamperes. 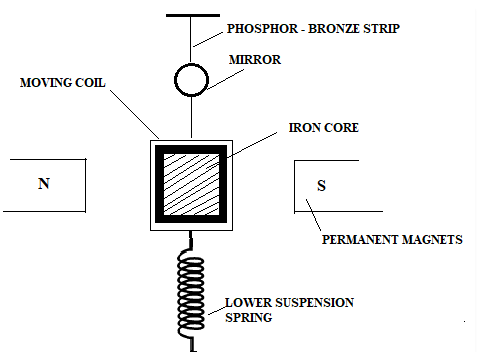 The moving coil galvanometer has a rectangular coil that has many turns and it is usually made of thinly insulated or fine copper wire that is wounded on a metallic frame. The coil is free to rotate about a fixed axis. A phosphor-bronze strip is connected to a movable torsion head. This is used to suspend the coil in a uniform magnetic field.

A cylindrical soft iron core is symmetrically positioned inside the coil to improve the strength of the magnetic field and to make the field radial. The lower part of the coil is attached to a phosphor-bronze spring having a small number of turns. The other end of the spring is connected to binding screws.

The spring is used to produce a counter torque which balances the magnetic torque and hence helps in producing a steady angular deflection. A plane mirror which is attached to the suspension wire, along with a lamp and scale arrangement is used to measure the deflection of the coil. Zero-point of the scale is at the centre.

Let a current I flow through the rectangular coil of n number of turns and a cross-sectional area A. When this coil is placed in a uniform radial magnetic field B, the coil experiences a torque τ.

Using Fleming’s left-hand rule we can determine that the forces on AD and BC are in opposite directions to each other. When equal and opposite forces F called a couple acts on the coil, it produces a torque. This torque causes the coil to deflect. 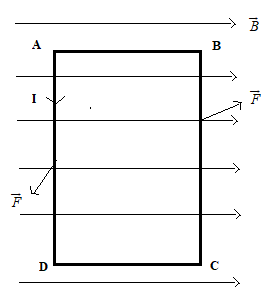 Substituting the value of F we already know,

Where lx b is the area A of the coil,

Hence, the torque acting on n turns of the coil is given by

The magnetic torque thus produced causes the coil to rotate, and the phosphor bronze strip twists. In turn, the spring S attached to the coil produces a counter torque or restoring torque kθ which results in a steady angular deflection.

Here k is called the torsional constant of the spring (restoring couple per unit twist). The deflection or twist θ is measured as the value indicated on a scale by a pointer which is connected to the suspension wire.

The quantity nAB / k is a constant for a given galvanometer. Hence, it is understood that the deflection that occurs in the galvanometer is directly proportional to the current that flows through it.