RBSE Class 8 Science Chapter 5 – Biodiversity Solutions are provided here for your reference. These solutions are drafted carefully by our team of subject-matter experts, keeping in mind the standards set by the Rajasthan Board. We are also offering the students with lots of additional questions and solutions. All these questions will help kids get ready for their examinations.

Students need a reliable resource for referring the solutions to their textbook questions. The RBSE solutions for Class 8 provided by us are accurate and elaborate so that students grasp them quite easily. The additional questions and solutions given here are very important and based on the concepts and topics covered in the textbook.

Q1. The species which is not found in natural habitat but is present in a conserved area is called

Q2. Which of the following is endangered species?

Q4. Those plants and animal species whose any representative member is no longer alive is called _________.

Q5. The plants and animal species which are found exclusively in a particular area are called _________ to that area.

Q7. Which are the conserved and protected areas for the plants and animals?

Answer: Wildlife sanctuaries, national parks, zoological parks and botanical gardens, etc. are the protected area for the plants and animals built by central and state governments.

Q8. What is the Red Data Book?

Answer: Red Data Book is a book in which the records of all endangered species are noted. There are distinct Red Data Books for animals, plants and other species.

Q9. What are the biodiversity hotspots?

Answer: The geographical regions that have rich biodiversity and are home to numerous endemic species but their biodiversity has been degraded due to selfish human activities are called the biodiversity hotspots.

Q10. Why were the botanical gardens established?

Answer: Botanical gardens were established in order to conserve plant species that are endangered and extinct in the wild.

Q11. What are the causes and harmful effects of Deforestation? Write a note.

Answer: Deforestation is the act of cutting down trees and clearing of forests due to man-made or natural causes.

The main causes of deforestation are listed below:

(i) Wood and forests are cut down for resources like fuel, furniture, wood items, ships, structural work, paper, decorative, etc.

(ii) Deforestation also happens due to overgrazing of animals.

(iv) Deforestation also happens to convert forests into agricultural land in order to fulfill the need of food grains for the growing population.

Harmful effects of deforestation are as follows:

(i) When trees are cut, the soil becomes loose and gets carried away by strong winds and water flow.

(iii) It will result in an increase in pollution.

(iv) Lesser the number of trees, lesser the CO2 used in photosynthesis. This will increase global warming.

(v) Deforestation means the destruction of habitats of many birds and animals.

(vi) Deforestation results in a disturbed balance of gases oxygen and carbon dioxide in the atmosphere.

(vii) Trees release water vapour through the process of transpiration. A decrease in the amount of water vapour in the atmosphere will result in less rainfall.

(vii) Due to deforestation, the incidences of landslides in hilly areas has increased.

Q12. What efforts have been taken for biodiversity conservation? Write in detail.

National and international organizations are working towards wildlife and forest protection.

Wildlife sanctuaries and National parks are being built to protect the crucial animal and plant species in their natural habitat.

Zoological parks and protected areas are established in order to spread awareness and protect wildlife. They work towards inculcating love for animals and plants in the general public.

Botanical gardens are built to conserve the plant species that are endangered or are extinct in their natural habitat. Their aim is to conserve vegetation.

Q13. The animal and plant species which if not conserved timely, can go extinct as a result of their reducing number are called

Q14. Which of the following is an extinct animal species?

Q15. Which of the following is an endangered animal specie?

Q16. Which of the following animal species is extinct in its natural environment?

Q17. Which of the following plant species is extinct in its natural habitat?

Q18. The image given below is of which of the following endangered plant specie? Q19. The image given below is of which of the following endangered animal species? 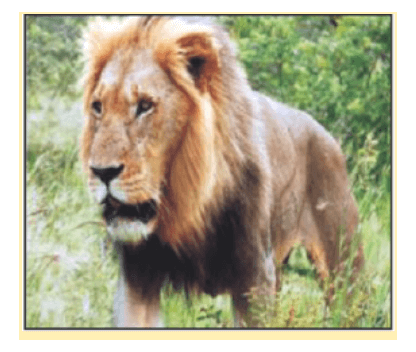 Q20. As a result of an increased level of carbon dioxide in the atmosphere, the temperature of the earth is increasing. This phenomenon is called ____________.

Q23. Asiatic Lions can be found in which of the following National Parks?

Q24. Indian Rhino can be found in

Q25. In which of the following National Parks will we find the rare Siberian Cranes?

Q26. Kashmir Stag can be found in which of these National Parks?

Q27. Which of the following is an example of migratory birds?

Q28. Bandhavgarh National Park is located in which of the following states?

Q29. Ranthambore National Park is situated in which of the following Indian states?

Q30. Where is the famous Gir National Park located?

Q32. Where is the Periyar National Park situated?

Q34. Which of these is a Biodiversity hotspot located in India?

Q35. __________ are the only living beings that can transform solar energy into chemical energy that can be used in food.

Q36. What is biodiversity?

Answer: The different kinds or species of plants and animals including microorganisms, etc. found in a particular area is called its biodiversity.

Q37. Why is India called a biodiversity-rich nation?

Answer: The diversity in plants, animals and microorganisms is more in India as compared to other countries of the world. For instance, there are around 2,50,000 plant species in the whole world, out of which, 45,000 are found in India itself! That’s why India is called a biodiversity-rich nation.

Q38. What do we mean by endangered species?

Answer: Those plant and animal species that if not conserved timely, may go extinct as a result of their reducing numbers are called endangered species.

Q39. Give examples of animals and plants endangered species.

Q40. What are extinct species?

Answer: Those plant and animal species that are lost forever and none of their representatives is alive today are known as extinct species.

Q41. Give examples of animals and plant extinct species.

Q42. What do we mean by species that are “extinct in their natural habitat”?

Q43. Give examples of animals and plants that are extinct in their natural habitat.

Q44. What are endemic species?

Answer: Those plant and animal species that are found exclusively in a specific area are called endemic species.

Q45. Give examples of animals and plants that belong to the category of endemic species.

Q46. Give three ways to conserve biodiversity with natural methods.

Answer: The natural methods of conserving biodiversity are:

Q47. Give two ways to conserve biodiversity through artificial methods.

Answer: The artificial methods to conserve biodiversity are:

Q48. What are the zoological parks?

Answer: Zoological parks are the places where animals and plants are displayed to the general public in order to spread awareness about wildlife. They also work as the breeding centres for the animals that have gone extinct in the wild.

Q49. What are migratory birds?

Answer: During their breeding season, many exotic birds fly long distances from their native places due to adverse environmental conditions and visit India, which has different climatic conditions. These are known as migratory birds.

Answer: The two Biodiversity Hotspots in India are:

To best prepare yourself for the examinations, solve as many questions as possible. Apart from the RBSE textbook questions, the additional questions offered here will help students get a thorough understanding of the chapter. Excel in your exams by not letting any page unturned. For other exciting resources, stay tuned!