Q. 1 When did Maharshi Kanad provide information regarding atoms?

Q. 2 The atomicity of oxygen in ozone is :

Q. 3 Which of the following substances is not solid at room temperature ?

Q. 4 The temperature at which liquid changes to solid is known as :

Q. 5 Which of the following options is a mixture?

Q. 6 Who was the first person to impart information about atom?

Answer: Around 460 to 370 BC, Greek philosopher Democritus and Lencippus, suggested that if we keep on dividing matter a point will be reached when the particle obtained cannot be divided further. They termed these indivisible particles as atoms (i.e. uncuttables).

Q. 7 What is the approximate size of an atom?

Answer: Water is formed by heating ice. Even though, here the solid state is liquified, the molecular formula for both are the same i.e, H20.

Q. 9 Which type of mixture, is the mixture of oil and water?

Answer: The mixture in which all the components are in different stages and phases are known as heterogeneous mixtures. For example, the mixture of oil and water is a heterogenous type of mixture.

Q. 10 By which method can water be separated from sandy water?

Answer: Filtration is a method to separate solid from liquid in a heterogenous mixture. Hence, water can be separated from the sandy water using the filtration method.

Q. 11 What is the atomicity of oxygen in dioxygen?

in a molecule. Molecular formula of dioxygen is O2. Hence, the atomicity of oxygen in a dioxygen is 2.

Q. 12 Give an example of a monatomic molecule.

Answer: Molecules of Argon, Helium etc. are made up of a single atom of the element. Hence, these are examples of a monatomic molecule.

Q. 13 Which is the state of matter whose shape and volume are constant?

Answer: The state of matter in which shape and volume are constant is the solid state.

Answer: The full form of C.N.G is given as Compressed Natural Gas

Q. 15 What is the process of conversion of liquid into vapours, known as?

Answer: The process of conversion of liquid into vapours is known as evaporation.

Q. 17 Write the definition of the latent heat of vaporisation?

Answer: The quantity of heat energy that is required to convert one kilogram of liquid, at one atmosphere pressure, at its boiling point, into the vapour state, is the latent heat or enthalpy of vapourisation.

Q. 18 Write one difference between an element and a compound?

Answer: When a substance is formed by the chemical combination of two or more than two elements in a definite ratio, then it is termed as a compound. Examples given are salt, water, ammonia and so on. Meanwhile, the group of the same type of atoms is known as an element. Given examples are gold, iron, silver, sulphur and so on.

Answer: When two or more than two elements or compounds are mixed in uncertain quantities, the substance formed is called mixture. There are two kinds of mixtures, namely – (1) homogeneous and (2) heterogeneous mixtures.

Answer: Given below are the four properties of liquid state:

Q. 21 What is a physical change? Give one example.

Answer: In a physical change, the chemical properties of matter remain unchanged, while the physical properties change. For example, water is extracted by heating ice. Here, the solid state liquifies but chemically both remain same as the molecular formula for both is H2O.

Q. 22 Explain the effect of pressure on the liquefaction of gases.

Answer: When pressure is applied the gas particles come close together. When the distance between these particles decreases, the gaseous state can be changed into the liquid state. However, this liquid cannot be solidified by applying immense pressure as the compressibility of liquid is very less.

Answer: The general characteristics, specialities or properties of matter are as given here:

1. There is empty space between the particles of matter.

2. The particles of matter are in a state of constant motion.

3. The particles of matter attract each other.

Q. 24 Which type of mixture can be separated using a separating funnel?

Answer: Differential extraction is the method used to separate two immiscible liquids like oil and water together. When it is poured into a separating funnel, the liquids in the mixture form different layers. When the stop cork is opened, the heavy liquid comes out first, followed by the lighter liquid.

Q. 25 Define compound. Give one example.

Answer: Compound is a substance produced by the chemical combination of two or more than two elements in a definite ratio. Examples for compounds are Salt, Water, Ammonia, Sulphuric acid and such.

Q. 26 Explain the effect of temperature on the conversion of different phases of matter.

Answer: On heating, the kinetic energy of a particle is often increased. When a solid is heated, the rate of vibration of its particles goes up. The energy provided by the heat also extends the force of attraction between the particles, thus enabling them to leave their set location and start moving independently. At a certain stage, the solid melts and becomes liquid. This temperature is termed as the melting point of the substance. The melting point of ice is 273.16ºK. In the meantime, the process of melting i.e. conversion of solid to liquid state is known as fusion.

Also, the latent heat or enthalpy of fusion i.e. melting is defined as “The heat energy required to change one kilogram of a solid into liquid, at its melting point, under one atmosphere pressure.”

Alternatively, the kinetic energy of liquid when heated increases further causing the conversion to gaseous state. The temperature at which liquid changes to gas is called its boiling point. The latent heat or enthalpy of vapourisation is known as the heat energy required to convert one kilogram of liquid, at one atmosphere pressure, at its boiling point, into the vapour state.

Q. 27 Explain sublimation with the help of a well labelled diagram.

Answer: Sublimation is the property of some substances, which allows them to change directly from solid state to vapour state without liquifying and the vapours when cooled form solid without changing over to the liquid state. Separating a mixture of salt and sal ammoniac (Sodium chloride and Ammonium chloride) :

On being heated, the sal ammoniac from the mixture vaporizes while the salt is left behind.

These vapours cool down on the inverted funnel placed on the mixture being heated and thus,

converts back into pure sal ammoniac.

Answer: To know the answer in detail please visit: Differences between solid, liquid and gas

Q. 30 How is matter purified by distillation? Explain with the help of a diagram.

Answer: When soluble solid is present in a liquid, the liquid from the mixture evaporates on being heated and on cooling these vapours, pure liquid is obtained through condensation. This process is known as distillation. Example: water distillation process. 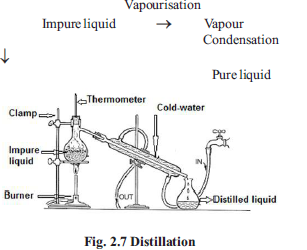 In the meantime, if the boiling point of two liquids do not have sufficient difference, they cannot be separated using the method of simple distillation.These liquids evaporate at the same temperature range and then condense together. In such cases, fractional distillation is

made use of. When the mixture is heated each liquid evaporates at its boiling point. Their vapours when passed through fractioning column and condensed, yield the different liquids. First the liquid with lower boiling point is obtained and then, that with higher boiling point.

Q. 1 The characteristic properties of liquid state are as mentioned:

Answer: (b) shape and volume is not definite

Q. 2 When did John Dalton propose the atomic theory?

Q. 4 What is the method to separate solid from liquid in a heterogenous mixture?

Q. 5 What are the various physical states of matter?

Answer: (b) Solid, liquid and gas

Q. 7 An element or compound, which can exist independently and expresses all the characteristic properties of that compound are

Q. 8 What is the molecular formula of ammonia?

Q. 10 What is the example of homogeneous mixture?

Q.11 Matter can be divided into two types on the basis of its components. Explain with examples.

Q.12 Which are the five states of matter according to the scientists?

Answer: Normally, on the basis of the physical state, matter is divided into three phases- solid, liquid and gas. Adding to this, according to the scientists there are five states of matter inclusive of Plasma and Bose – Einstein Condensate (BEC).

Q.13 Give some perfect examples of the state of matter-gas.

Answer: The air around us is the perfect example of gas state. Examples given are Nitrogen, Helium, Argon, Oxygen, Carbon-di-Oxide and so on.

Answer: Molecule is a group of two or more atoms that are joined together by chemical

bonds, which cannot be separated by general physical methods.

Q.15 What are elements? How many elements are known till date?

Answer: A group of the same kind of atom is known as an element. Examples include Gold, Silver, Iron, Sulphur and so on. Till date, we know of 118 elements.

Q.17 What is a change? What are the two types of changes?

Answer: Whenever the physical or chemical properties of a matter varies, then it is known as change. Change of any type is a process. There are two types of changes, namely (1) Physical change and (2) Chemical change.

Q.18 Which are the components separated from petroleum by fractional distillation?

Answer: Petrol, Diesel, Kerosine, Vaseline and such are the components separated from petroleum by fractional distillation.

Q.19 What is crystallisation?

Answer: A phenomenon of formation of solid crystals from the saturated solution is called crystallisation.

Q.20 How is carbon-di-oxide obtained?

Answer: Carbon-di-oxide is obtained on burning carbon in oxygen.

Following the textbooks and meticulously revising all the concepts is the best way to study. Students can rely on these RBSE Class 9 Science Solutions to understand all the topics thoroughly. Other good resources that the students can find to prepare most competently for the exam are the RBSE textbooks and sample papers.

Stay tuned to learn more about RBSE Exam pattern and other information.