Telangana Board Class 10 General Science Part II 2016 Question Paper and Solutions, considered an apt study material, is also a basis for the important questions. Some of these questions are likely to be repeated in the General Science Part II Biological Sciences exam. Students can access the PDF formats of these solved or unsolved question papers, as preferred. They can download these papers by just clicking on these interactive links mentioned in this article. The interactive PDF links provide students with the accessible printable format of the question papers. Additionally, the questions and answers are published on the web-page.

If the students are thorough with the complex concepts from Class 10 Biological Sciences, they will easily crack the exams. These solutions help the students to get acquainted with the question types asked in the TS Board SSC Class 10 General Science Part II exam. They are also urged to practise solving the previous papers of Telangana Board Class 10 before the exams. Doing so will help the students gauge their performance and their preparation level for the board exams. It is a suitable method to identify their mistakes and take steps to avoid them in the board exams. By solving these paper solutions regularly, students will get an overview of the question paper pattern and the marks’ distribution in each section. These question paper solutions also help them to scale the difficulty level of the exams. 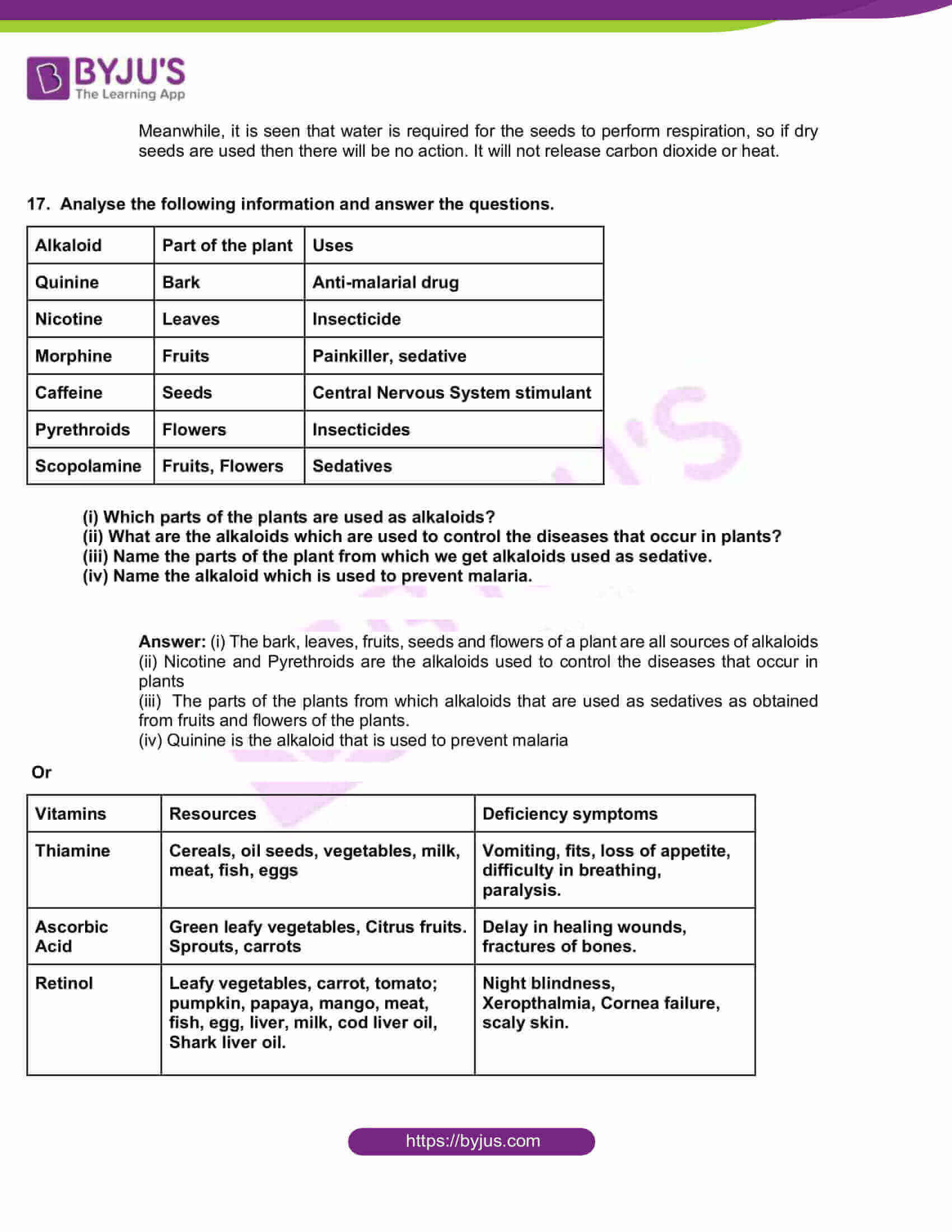 Answer: If the forest area is decreased rapidly, this could affect the plants and animals that live in the area. It causes depletion of the resources that we may need for the future, like water or timber, and damages our current resources.

Answer: A student who eats less calorific food could get Kwashiorkor or some deficiency of vitamins or proteins. Simultaneously, excess calories in children’s diets could cause obesity, an increase in weight and diabetes.

Answer: The two chemicals that are used in an experiment to test the presence of starch in the leaf are methylated spirit and iodine solution.

Answer: Sparrows eat off locusts, so in a world where sparrows are less, you can expect more locusts (as happened in China post-1958). Chemical pesticides are also said to be a reason for the depletion of sparrows. We have to think of some biological methods to save the sparrows.

Answer: Mucus lubricates and protects the oesophageal walls from damage, while allowing the food bolus to slide down easily. So, without the mucus the walls will have no protection and the food will also not slide down that easily.

Answer: Here are the two activities that you can perform to save electricity:

(a) Switch off the lights and fans when not in use

(b) Insulate your home and also use the refrigerators, water heaters and air conditioners with care

Answer: These are afferent nerves also known as the sensory nerves or sensory neurons. They are called the stimulus detectors as they carry the messages towards the central nervous system from the nerve endings on the muscles of the various sense organs, which can sense the change in the surroundings.

Answer: The openings between atria and ventricles are guarded by valves. The valve located on the right Auriculo-ventricular septum between right atrium and right ventricle is referred to as “Tricuspid Valve.” Additionally, the valve found on the left Auriculo-ventricular septum between left atrium and left ventricle is the Bicuscid valve or Mitral valve. Meanwhile, the valves at the region of Pulmonary aorta are called the “Pulmonary valves and the valves at the region of the systemic aorta are called systemic valves.

Answer:In this, the cutting from some other plant is attached to the stem of the plant rooted in the ground. The tissues of the graft become integrated with the tissues of the rooted plant and develop as a single plant over time. Breeders select two parents with useful traits to reproduce or yield an offspring with those desired traits. Using grafting method, the tissues of two plants are attached and allowed to grow, leading to a production of a variety with both characteristics. Also Read: How Is The Embryo Sac Formed

Answer: These are some questions to ask a palaeontology about fossils:

Answer: Given here are some suggestions to create awareness on groundwater conservation:

13. Observe the pyramid of numbers which is given below and answer the questions. 14. Explain the stages of mitosis with the help of diagrams. Explain the changes that take place at prophase.

Answer: Mitosis is a process of asexual reproduction observed in unicellular organisms. Read on to explore what is mitosis, and the different stages of mitosis. Prophase is the first phase in mitosis and it is a process that separates the duplicated genetic material carried in the nucleus of a parent cell into two identical daughter cells.

Explain the sex determination in human beings with the help of a flow chart.

Answer: A sex-determination is the biological system that determines the development of sexual characteristics in an organism.

15. Explain the different types of adaptations in plants with suitable examples.

Answer: There are various types of plants in different regions and the plants have adapted themselves to the climatic and other conditions of the region. Learn more about the adaptations of plants with suitable examples here.

What are the different stages in urine formation? Explain what happens in those stages.

Answer: Waste excreted from the human body is mainly in the form of urine. Our kidneys play a major role in the process of excretion. Constituents of normal human urine include 95 percent water and 5 percent solid wastes. It is produced in the nephron, which is the structural and functional unit of the kidney. Urine formation in our body is mainly carried out in three phases namely

The mechanism of urine formation involves the following steps:

Glomerular filtration occurs in the glomerulus where blood is filtered. This process occurs across the three layers- epithelium of Bowman’s capsule, endothelium of glomerular blood vessels, and a membrane between these two layers.

Blood is filtered in such a way that all the constituents of the plasma reach the Bowman’s capsule, except proteins. Therefore, this process is known as ultrafiltration.

About 99% of the filtrate obtained is reabsorbed by the renal tubules. This is known as reabsorption and is achieved by active and passive transport.

The next step in urine formation is the tubular secretion. Here, tubular cells secrete substances like hydrogen ion, potassium ion, etc into the filtrate. By this process, the ionic, acid-base and the balance of other body fluids are maintained. The secreted ions combine with the filtrate and form urine. The urine passes out of the nephron tubule into a collecting duct.

The urine produced is 95% water and 5% nitrogenous wastes. Wastes such as urea, ammonia, creatinine are excreted in the urine. Apart from these, the potassium, sodium and calcium ions are also excreted.

16. Write the procedure involved in the acid and leaf experiment to understand the concept “how the stomach gets protected from its own acid secretions”. Compare the observations with the changes that take place in the human digestive system.

Answer: Take two similar green leaves and apply petroleum jelly or Vaseline or grease on one leaf, while leaving the other as it is. Now, add some two to three drops of weak acid to both the leaves and observe them after some 30 minutes. Observe which leaf was affected by the acid. What are the changes that you observed on both the leaves? What saved the other leaf from the effect of acid? Mucus secreted by cells present in the walls of the stomach form a thin lining on the walls and this counters the action on the stomach. Now, the function of the petroleum jelly can be compared to that of the mucus lining of the stomach wall. This proves that the stomach gets protected from its own acid secretions.

Explain the procedure you have adopted in your school to prove that heat is liberated during respiration. What result we will get, if you perform this experiment with dry seeds ?

Answer: Given here is the procedure to prove that heat is liberated during respiration.

Aim: Prove that heat is evolved during respiration

Experiment: Place a thermometer in two thermos flasks consisting of 200 seeds that are soaked in water for 24hrs. Now, divide these seeds into two flasks. Flask A will have the live germinating seed, while Flask B will contain the seeds (live germinating) boiled and washed with formalin/carbolic acid.

Result: This rise in temperature indicates that heat is given out by germinating seeds. Thus, this experiment proves that heat is evolved during respiration.

Meanwhile, it is seen that water is required for the seeds to perform respiration, so if dry seeds are used then there will be no action. It will not release carbon dioxide or heat.

17. Analyse the following information and answer the questions.

(i) Which parts of the plants are used as alkaloids?

(ii) What are the alkaloids which are used to control the diseases that occur in plants?

(iii) Name the parts of the plant from which we get alkaloids used as sedative.

(iv) Name the alkaloid which is used to prevent malaria.

Answer: (i) The bark, leaves, fruits, seeds and flowers of a plant are all sources of alkaloids

(iv) Quinine is the alkaloid that is used to prevent malaria

(i) Which vitamin deficiency is related to the bones?

(ii) Which vitamins can we get by eating fruits?

(iii) Which vitamin deficiency causes paralysis? To prevent it, what type of food we have to eat?

(iv) To avoid vitamin deficiency diseases, what type of food we have to eat?

Answer: (i) Deficiency of the vitamins calciferol and ascorbic acid cause diseases related to the bone

(ii) The vitamins we can get by eating fruits are ascorbic acid, retinol and tocoferol.

(iii) Paralysis is caused by the deficiency of vitamin thiamine. To prevent it we have to eat cereals, oil seeds, vegetables, milk, meat, fish and eggs, which are a good source of thiamine.

2. In plants, the fusion of male gamete with secondary nucleus results in_______

4. Name the body part which have division-less cells:

5. The diseases caused by using mosquito repellents are ______

6. In the plants, following is responsible for transport of water_______

8. The solution used to identify the presence of Oxygen in Anaerobic respiration experiment is _________ 10. Name the valve indicated in the picture.