What is a Biogeochemical Cycle?

“Biogeochemical cycles mainly refer to the movement of nutrients and other elements between biotic and abiotic factors.” 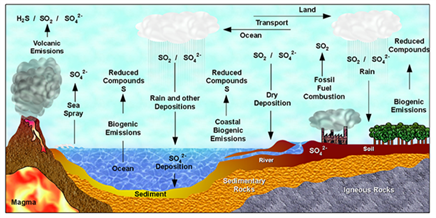 The term biogeochemical is derived from “bio” meaning biosphere, “geo” meaning the geological components and “chemical” meaning the elements that move through a cycle.

The matter on Earth is conserved and present in the form of atoms. Since matter can neither be created nor destroyed, it is recycled in the earth’s system in various forms.

The earth obtains energy from the sun which is radiated back as heat, rest all other elements are present in a closed system. The major elements include:

Let us have a look at each of these biogeochemical cycles in brief:

The water from the different water bodies evaporates, cools, condenses and falls back to the earth as rain.

This biogeochemical cycle is responsible for maintaining weather conditions. The water in its various forms interacts with the surroundings and changes the temperature and pressure of the atmosphere.

There’s another process called Evapotranspiration (i.e. vapour produced from leaves) which aids this process. It is the evaporation of water from the leaves, soil and water bodies to the atmosphere which again condenses and falls as rain.

It is one of the biogeochemical cycles in which carbon is exchanged among the biosphere, geosphere, hydrosphere, atmosphere and pedosphere.

Also, the animals that consume plants, obtain the carbon stored in the plants. This carbon is returned to the atmosphere when these animals decompose after death. The carbon also returns to the environment through cellular respiration by animals.

Huge carbon content in the form of carbon dioxide is produced that is stored in the form of fossil fuel (coal & oil) and can be extracted for various commercial and non-commercial purposes. When factories use these fuels, the carbon is again released back in the atmosphere during combustion.

It is the biogeochemical cycle by which nitrogen is converted into several forms and it gets circulated through the atmosphere and various ecosystems such as terrestrial and marine ecosystems.

Nitrogen is an essential element of life. The nitrogen in the atmosphere is fixed by the nitrogen-fixing bacteria present in the root nodules of the leguminous plants and made available to the soil and plants.

The bacteria present in the roots of the plants convert this nitrogen gas into a usable compound called ammonia. Ammonia is also supplied to plants in the form of fertilizers. This ammonia is converted into nitrites and nitrates. The denitrifying bacteria reduce the nitrates into nitrogen and return it into the atmosphere.

This biogeochemical cycle moves through the atmosphere, the lithosphere and the biosphere. Oxygen is an abundant element on our Earth. It is found in the elemental form in the atmosphere to the extent of 21%.

This biogeochemical cycle moves through the rocks, water bodies and living systems. Sulphur is released into the atmosphere by the weathering of rocks and is converted into sulphates. These sulphates are taken up by the microorganisms and plants and converted into organic forms. Organic sulphur is consumed by animals through food. When the animals die and decompose, sulphur is returned to the soil which is again obtained by the plants and microbes, and the cycle continues.

To learn more about biogeochemical cycles, and its types, keep visiting BYJU’S website or download BYJU’S app for further reference.