A cell is the structural and functional unit of life. Every living organism existing on this planet is composed of either one or many cells. The living cells are composed of minute organelles which are collectively called as cell organelles. They are the membrane-bound structure, bounded in a double layer of phospholipids found within a cell.

Mitochondria are known as the powerhouses of the cell. It is involved in different cellular activities like respiration, differentiation, cell signalling, cell senescence, controlling the cell cycle, cell growth and other metabolic activities of the cell. They are rod-shaped, a double membraned organelle found both in the plant as well as animal cells.

The term ‘mitochondrion’ is derived from a Greek word which refers to threadlike granules and it was first described by German pathologist -Richard Altmann in the year 1890.

Mitochondria are a double-membrane-bound cell organelle found in most eukaryotic organisms. In all living cells, these cell organelles are found freely floating within the cytoplasm of the cell.

The diagram of Mitochondria is useful for both Class 10 and 12. It is one among the few topics having the highest weightage of marks and is majorly asked in the examinations.

Diagram Of Mitochondria
The diagram below shows the structure and functions of the mitochondria. 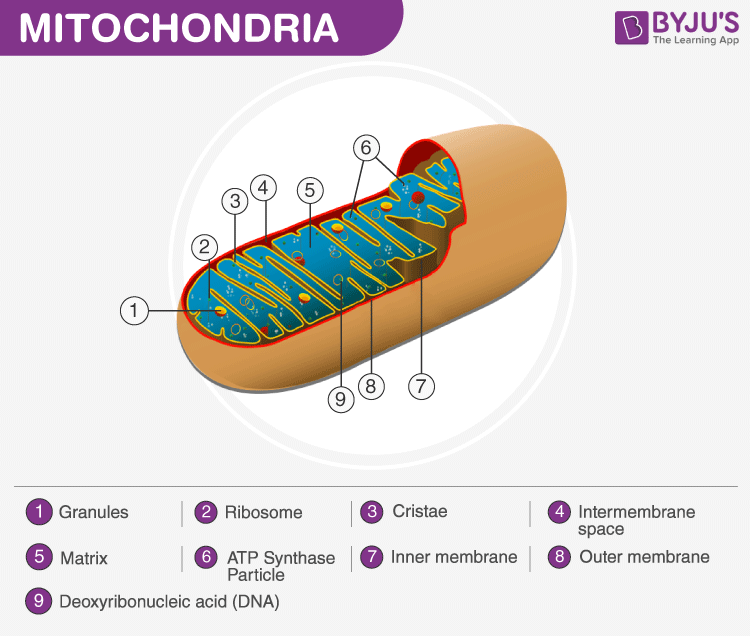 Structure and Functions Of Mitochondria

It is a viscous or a gel-like fluid containing a mixture of enzymes, ribosomes, inorganic ions, mitochondrial DNA, nucleotide cofactors, and organic molecules. It is involved in the cellular respiration and production of ATP molecules.

The inner layer, surrounded by the folds of the mitochondrial matrix are collectively referred to Cristae. These inner membranes increase the surface area of the inner membrane and have different roles in cellular respiration, generation of ATP molecules- the energy currency of the cell and other chemical reactions.

The inner mitochondrial membrane holds proteins and functions by permitting the entry of only the selected molecules. Therefore they are also called the special membrane transporters.

The outermost layer of the Mitochondria that hold proteins called porins and form channels that allow the movement of proteins across the inner and outer membrane of mitochondria. It also holds a number of enzymes with a wide variety of functions.

This is the area between the inner and outer membranes. It is subdivided into two distinct subcompartments: the intra cristae space and the lumen. Both are separated by the tubular structures measuring 10 to -40nm in diameter called the cristae junctions. The Intermembrane space is mainly involved with the transportation, modification of proteins coordinates, apoptosis and also in the regulation of the respiratory chain complexes.

This was a brief introduction to Diagram Of Mitochondria. For more information about Mitochondria, its structure, functions and other related topics, visit us at BYJU’S Biology.