Difference between Sponge and Hydra

The members of the phylum Porifera are commonly called sponges. They are asymmetrical marine animals. Though they are multicellular animals, they have a very primitive body organisation. For example, they have a canal system for water transportation. Moreover, they are hermaphrodites (sexes are not separate).

Structure of a sponge

It has minute pores called Ostia through which the water enters. The water reaches the central cavity or spongocoel, and later leaves through an aperture called the osculum. This water pathway transports food, helps in the exchange of gases and removal of waste. Their whole body is supported by skeleton-like structures called spicules. Also, the central spongocoel is lined by collar cells called choanocytes.

Hydra are freshwater, radially symmetrical animals under the phylum Cnidaria. They are diploblastic animals and show tissue level of body organisation. Hydra exhibits a body form called a polyp. It is a cylindrical and sessile form.

They have a single mouth opening called a hypostome. The mouth is surrounded by tentacles (cnida) which have cnidocytes. These cnidocytes contain stinging capsules or nematocyst. They help in defence, the capture of prey and in anchorage. Excretion and respiration occur throughout the body surface. 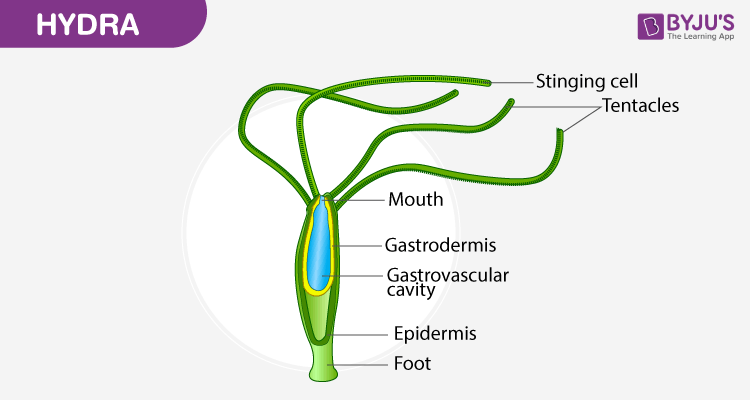 Difference between Sponge and Hydra

What are polyp and medusa?

The two basic body shapes of cnidarians are medusa and polyp. A polyp is a cylindrical and sessile form (Hydra). In contrast, medusa is a free-living, umbrella-like structure (Jellyfish). Sometimes, polyps can asexually produce medusae. Also, medusae can form polyps sexually (Obelia).
Also see: Difference between Polyp and Medusa.

What is intracellular digestion?

How does Hydra capture its prey?

Hydra paralyses and kills its prey by using its stinging capsules or nematocysts. These nematocysts are present around the tentacles, and help in defence as well as capturing prey. The nematocyst captures the prey and brings it near the hypostome. Now, the food or prey is slowly moved inside the mouth by the contacting tentacles.

What are organisms under the phylum Porifera?

The phylum Porifera includes the lowest level of multicellular animals. This includes around 5000 species of organisms. Examples – Sycon, Hylonema, Cliona, Euplectella and Spongilla.