The human ear is the vital organ of hearing as well as equilibrium. It perceives and analyses sound waves by a mechanism that converts sound into electrochemical impulses – transduction. There are several structures in the human ear that help in this hearing mechanism and equilibrium. Let’s have a look at one such ear structure – the Eustachian tube.

What is the Eustachian Tube?

The structure of the human ear comprises three sections, namely – the outer ear, the middle ear and the inner ear. Here, the anatomy of the middle ear shows the presence of the Eustachian tube.

The terms auditory tube and pharyngotympanic tube are often synonymous with the Eustachian tube. This tube is approximately 3 mm in diameter and 35 mm long in adults. In that, about one-third structure near the middle ear is made of bone. The remaining two-third structure forms the cartilaginous part. Furthermore, the structure is lined with mucous membranes.

The upper end of the Eustachian tube is bony and narrow. It becomes cartilaginous and wider as it nears the pharynx. Thus the tube is mainly considered as a fibrocartilaginous structure connecting the nose and the air cell system of the temporal bone.

Totally four muscles contribute to the closing and opening of the Eustachian tube. These muscles are located near the jaw, soft palate, ear, neck and head. Also, these muscles are innervated by the cranial nerves.

The Eustachian tube also drains the mucus of the middle ear into the nasopharynx. This is called mucociliary clearance. This is because small hair-like cilia cover the tube to aid in the drainage of middle ear secretions to the pharynx.

The tube also protects from viruses and bacteria. It stays closed and serves as a protective barrier for the middle ear. During allergies, nasal congestion and URTI (upper respiratory tract infection), the opening membrane of the tube gets swollen and causes trapping of fluid, which eventually leads to clogging. This further leads to bacterial growth and can result in ear infections.

Also, Check: What is the function of Cochlea?

Some common symptoms are:

Who first discovered the Eustachian tube?

The description of the Eustachian tube or auditory tube was first published in 1562 by Bartolomeus Eustachius, after whom the structure is named. He described it as an auditory passage in his thesis Epistola de auditus organis.

What are the structures present in the middle ear?

What is an eardrum?

The tympanic membrane or eardrum is a thin membrane-like structure that separates the external and the middle ear. It is a part of the outer ear structure that receives and amplifies sound. 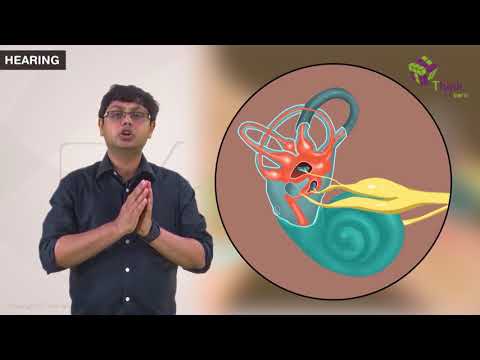