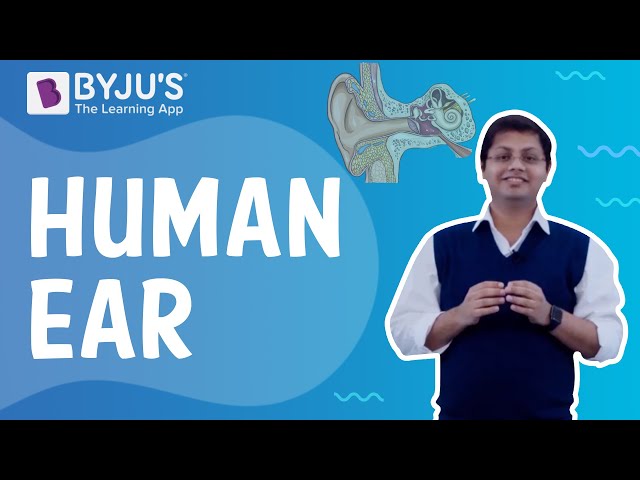 The ear is a sensitive organ of the human body. It is mainly concerned with detecting, transmitting and transducing sound. Maintaining a sense of balance is another important function performed by the human ear.

Let us have an overview of the structure and functions of the human ear.

The human ear parts are explained below:

The external ear is further divided into the following parts:

The auricle comprises a thin plate of elastic cartilage covered by a layer of skin. It consists of funnel-like curves that collect sound waves and transmits them to the middle ear. The lobule consists of adipose and fibrous tissues supplied with blood capillaries.

It is a slightly curved canal supported by bone in its interior part and cartilage in the exterior part. The meatus or the canal is lined with stratified epithelium and wax glands.

This membrane separates the middle ear and the external ear. This part receives and amplifies the sound waves. Its central part is known as the umbo.

It is a narrow air-filled cavity separated from the external ear by tympanic membrane and from inner ear by the bony wall. The tympanic cavity has an auditory tube known as the eustachian tube in its anterior wall.

The eustachian tube is a 4cm long tube that equalizes air pressure on either side of the tympanic membrane. It connects the tympanic cavity with the nasopharynx.

These are responsible for transmitting sound waves from the eardrum to the middle ear. There are three ear ossicles in the human ear:

The bony labyrinth comprises a vestibule, three semi-circular canals, and spirally coiled cochlea. It is filled with perilymph.

Following are the important function of the ear:

The mechanism of hearing involves the following steps:

The eustachian tube and the vestibular complex are the important parts of the ear responsible for the balance.

For more information on the human ear, the structure of ear class 9, human ear parts, the function of the ear, and other related topics keep visiting BYJU’S website or download BYJU’S app for further reference.

Learn more in detail about human ear, the structure, functions and other related topics at BYJU’S Biology.