An ecosystem is where both the living and non-living interact with each other and the surrounding environment. It is also referred to as the structural and functional unit of ecology.

The term “Ecosystem” was first coined by A.G.Tansley, an English botanist, in 1935.

The ecosystem is further categorised into:

The ecosystem present within the water bodies, including the oceans, sea, rivers, ponds, and lakes is termed the aquatic ecosystem.

It refers to land-based ecosystems. Based on the various geological zones, these ecosystems are further classified into different types. The terrestrial ecosystem is categorised into:

Let us learn more in detail about the Grassland Ecosystem.

What is the grassland ecosystem? 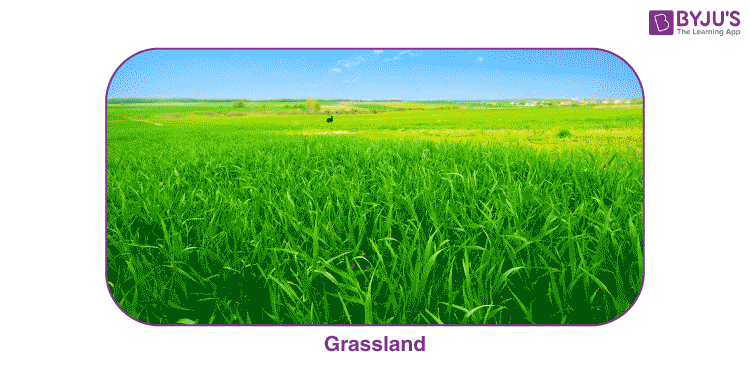 The terrestrial ecosystem in which grasses and herbaceous plants are dominant is referred to as the grassland ecosystem.

Grass controls the grassland ecosystems with few or no trees where there is not enough for a forest and too much for a desert. Hence, it is also called a transitional landscape.

The grassland ecosystem is called the largest biomes on earth and it covers about 10 per cent of the earth’s surface. It is mainly found where rainfall is about 15-75 cm per year, not enough to support a forest, but more than that of a true desert.

The Grassland ecosystems are called by various names in several regions, such as pampas in South America, Veldt in South Africa, Steppes in Europe and Asia, and Downs in Australia.

In India, these ecosystems are found mainly high in the Himalayas. The rest of India’s grasslands are primarily composed of the Savanna and Steppes.

This ecosystem contains five types of grasslands that are:

A Grassland Ecosystem is a mixture of small herbs, weeds, grass, trefoil, dicotyledonous, shrubs and other leguminous species, contributing to a high degree of preservation. The economic importance of the grassland ecosystem is that it serves in the maintenance of the crop of many domesticated and wild herbivores such as cattle, sheep, goats, ass, pigs, horses, mules, camels, deer, zebras, etc. These animals provide food, milk, wool and transportation to man.

Also Read Adaptation and habitats of Plant and Animals.

This article concludes with an introduction to the grassland ecosystem.

To know more about the grassland ecosystem, its features, important questions and other related topics, keep visiting our website at BYJU’S Biology.