Habitat is a part of an ecosystem. The climate, plants, and animals are the identities of a habitat. Ecosystems primarily have two domains:

Water supports many lives. Organisms which survive in water are called aquatic organisms. They depend on water for their food, shelter, reproduction and all other life activities.

An aquatic ecosystem includes freshwater habitats like lakes, ponds, rivers, oceans and streams, wetlands, swamp, etc. and marine habitats include oceans, intertidal zone, reefs, seabed and so on. The aquatic ecosystem is the habitat for water-dependent living species including animals, plants, and microbes.

Different types of aquatic ecosystems are as follows:

They cover only a small portion of earth nearly 0.8 per cent. Freshwater involves lakes, ponds, rivers and streams, wetlands, swamp, bog and temporary pools. Freshwater habitats are classified into lotic and lentic habitats. Water bodies such as lakes, ponds, pools, bogs, and other reservoirs are standing water and known as lentic habitats. Whereas lotic habitats represent flowing water bodies such as rivers, streams.

They mainly refer to the rapidly flowing waters that move in a unidirectional way including the rivers and streams. These environments harbor numerous species of insects such as beetles, mayflies, stoneflies and several species of fishes including trout, eel, minnow, etc. Apart from these aquatic species, these ecosystems also include various mammals such as beavers, river dolphins and otters.

They include all standing water habitats. Lakes and ponds are the main examples of Lentic Ecosystem. The word lentic mainly refers to stationary or relatively still water. These ecosystems are home to algae, crabs, shrimps, amphibians such as frogs and salamanders, for both rooted and floating-leaved plants and reptiles including alligators and other water snakes are also found here.

Wetlands are marshy areas and are sometimes covered in water which has a wide diversity of plants and animals. Swamps, marshes, bogs, black spruce and water lilies are some examples in the plant species found in the wetlands. The animal life of this ecosystem consists of dragonflies and damselflies, birds such as Green Heron and fishes such as Northern Pike. 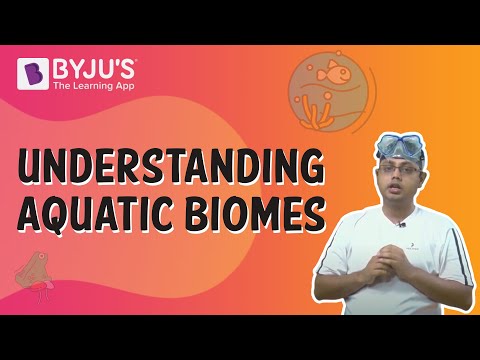 Marine ecosystem covers the largest surface area of the earth. Two third of earth is covered by water and they constitute of oceans, seas, intertidal zone, reefs, seabed, estuaries, hydrothermal vents and rock pools. Each life form is unique and native to its habitat. This is because they have adaptations according to their habitat. In the case of aquatic animals, they can’t survive outside of water. Exceptional cases are still there which shows another example of adaptations (e.g. mudskippers). The marine ecosystem is more concentrated with salts which make it difficult for freshwater organisms to live in. Also, marine animals cannot survive in freshwater. Their body is adapted to live in saltwater; if they are placed in less salty water, their body will swell (osmosis).

Our planet earth is gifted with the five major oceans, namely Pacific, Indian, Arctic, and the Atlantic Ocean. Among all these five oceans, the Pacific and the Atlantic are the largest and deepest ocean. These oceans serve as a home to more than five lakh aquatic species. Few creatures of these ecosystems include shellfish, shark, tube worms, crab small and large ocean fishes, turtles, crustaceans, blue whale, reptiles, marine mammals, seabirds, plankton, corals and other ocean plants.

Plants and animals in an aquatic ecosystem show a wide variety of adaptations which may involve life cycle, physiological, structural and behavioural adaptations. Majority of aquatic animals are streamlined which helps them to reduce friction and thus save energy. Fins and gills are the locomotors and respiratory organs respectively. Special features in freshwater organisms help them to drain excess water from the body. Aquatic plants have different types of roots which help them to survive in water. Some may have submerged roots; some have emergent roots or maybe floating plants like water hyacinths.

Learn more in detail about the Ecosystem, its types their habitat or any other related topics @ BYJU’S Biology.