Water is an essential element for survival. About seventy per cent of the human body consists of water while plants contain almost 90 per cent of water. Still, we have to depend on some outside sources to fulfil the water requirements of our body.

Similarly, crops require water for their growth and development. The process of supplying water to the crops is known as irrigation.

Irrigation is the process of applying water to the crops artificially to fulfil their water requirements. Nutrients may also be provided to the crops through irrigation. The various sources of water for irrigation are wells, ponds, lakes, canals, tube-wells and even dams. Irrigation offers moisture required for growth and development, germination and other related functions.

The frequency, rate, amount and time of irrigation are different for different crops and also vary according to the types of soil and seasons. For example, summer crops require a higher amount of water as compared to winter crops.

Let us have a look at different types of irrigation and the methods used for irrigation.

In this system, no irrigation pump is involved. Here, water is distributed across the land by gravity.

In this system, water is applied to each plant through a network of pipes under low pressure.

Water is distributed from a central location by overhead high-pressure sprinklers or from sprinklers from the moving platform.

In this type, drops of water are delivered near the roots of the plants. This type of irrigation is rarely used as it requires more maintenance.

In this, the water is distributed by a sprinkler system moving in a circular pattern.

Water is distributed through a system of pumping stations gates, ditches and canals by raising the water table.

This a labour intensive and time-consuming system of irrigation. Here, the water is distributed through watering cans by manual labour.

Irrigation can be carried out by two different methods:

In this method, irrigation is done manually. Here, a farmer pulls out water from wells or canals by himself or using cattle and carries to farming fields. This method can vary in different regions.

The main advantage of this method is that it is cheap. But its efficiency is poor because of the uneven distribution of water.  Also, the chances of water loss are very high.

Some examples of the traditional system are pulley system, lever system, chain pump. Among these, the pump system is the most common and used widely.

The modern method compensates the disadvantages of traditional methods and thus helps in the proper way of water usage.

A sprinkler system, as its name suggests, sprinkles water over the crop and helps in an even distribution of water. This method is much advisable in areas facing water scarcity.

Here a pump is connected to pipes which generate pressure and water is sprinkled through nozzles of pipes.

In the drip system, water supply is done drop by drop exactly at roots using a hose or pipe. This method can also be used in regions where water availability is less.

The importance of irrigation can be explained in the following points:

Irrigation should be optimum because even over-irrigation can spoil the crop production. Excess water leads to waterlogging, hinder germination, increased salt concentration and uprooting because roots can’t withstand standing water. Thus the proper method is to be used for the best cultivation.

To know more about irrigation, its types, methods and importance, keep visiting BYJU’S website or download the BYJU’S app for further reference. 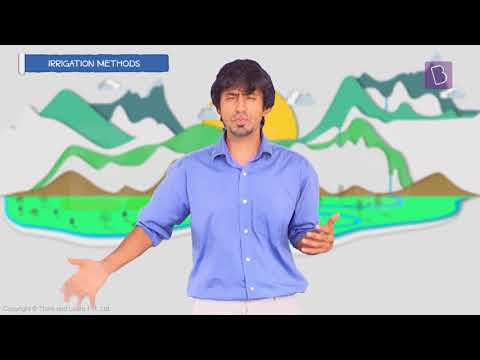 What do you understand by irrigation?

Irrigation is the process of supplying water to the land at regular intervals by means of canals and other artificial methods, to enhance agricultural growth and maintain the landscape during the periods of less average rainfall.

What are the different types of irrigation?

What are two different methods of irrigation?

What do you mean by micro-irrigation?

Micro-irrigation is the application of small quantities of water frequently directly above and below the surface of the soil, in the form of discrete drops, continuous drops through water emitters.

What is basin irrigation?

In basin irrigation, the land is divided into basins. It has a simpler design than the furrow and border design.

Test your Knowledge on Irrigation!
Q5