Agriculture is the science, which mainly deals with the diverse processes or the methods used for the cultivating different varieties of plants and livestock farming or animal husbandry on the basis of human requirements.

When plants of the same variety are cultivated on a large scale, they are called crops. The crops are divided on the basis of the seasons in which they grow:

Read on to explore the production and management of crops in detail. 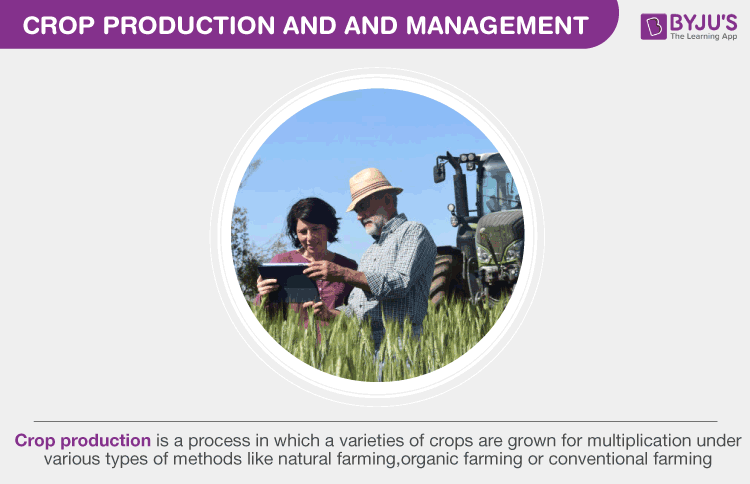 The soil is loosened and tilted before the seeds are sown. Ploughs are used for the purpose. If the soil contains big lumps, they are broken with the help of a hoe. This process aerates the soil so that the roots breathe easily. The nutrients and minerals get properly mixed with the soil and come at the top. Thus, the fertility of the soil increases and is fit for plantation.

The good quality, infection-free seeds are collected and sown on the prepared land. The seeds should be sown at proper depths and proper distances. Following are the various methods used to sow the seeds:

Addition Of Manures And Fertilizers

The soil may not have the right nutrients to efficiently sustain plant growth. Hence, manures and fertilizers are added to the soil to increase its fertility and help plants grow better. Manure is prepared by using decomposing plant and animal matter in compost pits. Fertilizers, on the other hand, are chemicals prepared in factories which contain nutrients for a specific plant. They give faster results than manures. However, when excessively used, they turn the soil infertile.

Crops require water at regular intervals for proper growth. The supply of water to the plants is known as irrigation. Well, rivers, lakes, tube-wells are different sources for irrigation. The traditional methods of agriculture involve the use of humans and animals. The various traditional ways are moats, chain-pump, dhekli, rahat.

The modern techniques of irrigation include the sprinkler system and the drip system. Water is very important for the germination of seeds. It helps in the proper development of flowers, fruits, seeds, and plants. Therefore, it should be present in plants in large quantities.

The process of removal of weeds is called weeding. To achieve this, weedicides are employed, which are essentially chemicals specifically made to destroy weeds. They are usually sprayed before seeding and flowering.

When the crop matures, it is cut for further processing. This process is known as harvesting. It is usually manual labour, done with the help of sickle. However, mechanical harvesting is used these days – machines such as combine harvesters are used where the crops are harvested and threshed in one go.

The grains should be properly stored if they are to be kept for longer periods. They need to be protected from pests and moisture. The freshly harvested seeds should be dried before they are stored. This prevents the attack from microorganisms and pests.

To explore more concepts on Crop Production and Management, or any other related topics, please register at BYJU’S.

What are the steps involved in crop production?

The steps involved in crop production include:

The factors that control crop production include:

What is the importance of crop production?

Crop production supports the huge population of a country. All individuals depend on the crops for their food. It also provides employment to a large number of people.