Leeches are metamerically segmented parasitic worms. They are annelids and thus have unjointed appendages. The unique feature of leeches is the presence of anterior and posterior suckers.

Let’s look at the description of the leech (Hirudinaria granulosa) with a labelled diagram. 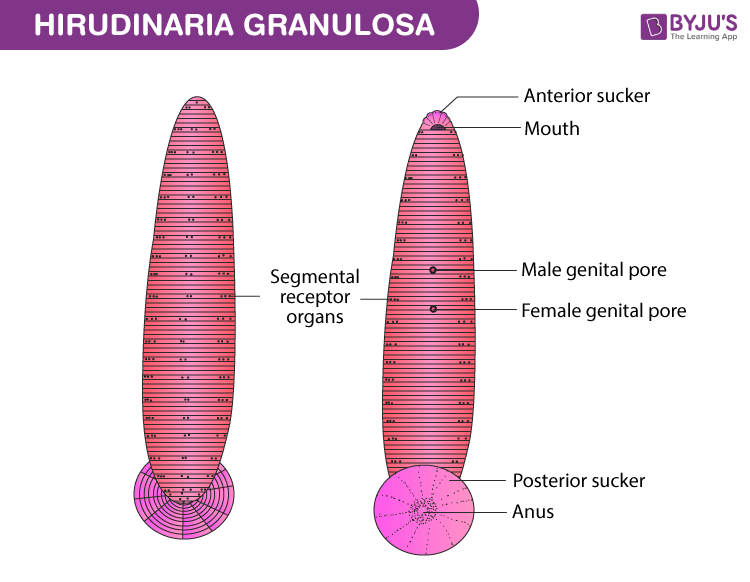 Hirudinaria or Indian cattle leech is a freshwater species. They are cosmopolitan in distribution but are mostly found in Myanmar and India. They are sanguivorous ectoparasites that live in swamps, slow-running streams, lakes and ponds.

Leeches are parasites that feed on the blood of humans and other animals. Leeches secrete proteins like hirudin that serve as anticoagulants and thus prevent blood from clotting. In earlier days, they were used to draw blood from patients in order to reduce fluid pressure.

Somites or metameres are bilaterally paired blocks that are seen along the head to tail axis of segmented animals. It is visible in arthropods and annelids. In leeches, the body is divided metamerically into 33 somites.

Clitellata denotes a class of annelid worms that have a unique feature called the clitellum. The clitellum is a thick girdle-like ring present at the anterior end of the body. In leeches and earthworms, it is a thick glandular segment that secretes a viscid sac for the eggs to be stored.

What are hermaphrodite animals?

Hermaphrodites are animals that have both male and female reproductive organs and can produce both gametes.