Difference Between Mitosis And Meiosis 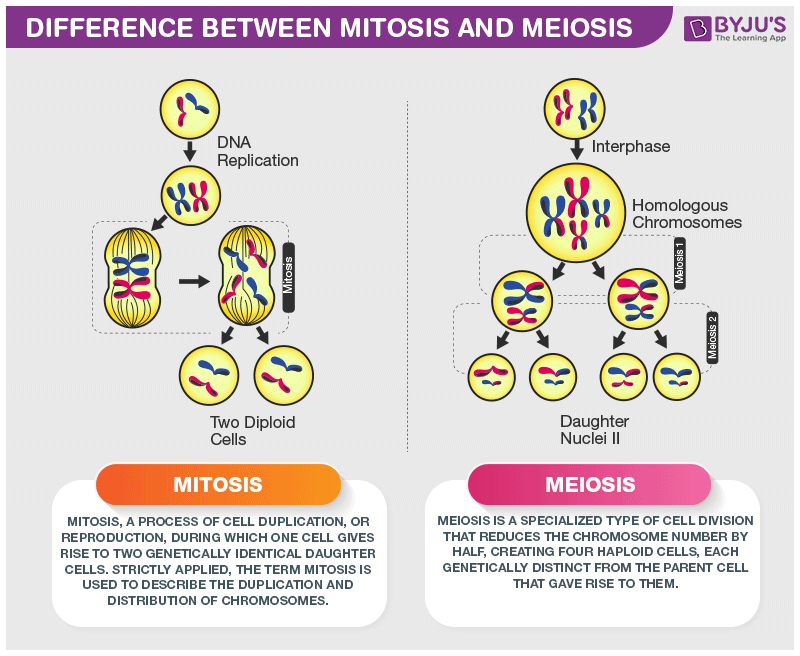 Difference Between Mitosis And Meiosis

In single-celled organisms, cell reproduction gives rise to the next generation. In multicellular organisms, cell division occurs not just to produce a whole new organism but for growth and replacement of worn-out cells within the organisms.

Cell division is always highly regulated and follows a highly orchestrated series of steps. The term cytokinesis refers to the division of a cell’s cytoplasm, while mitosis and meiosis refer to two different forms of nuclear division.

Mitosis results in two nuclei that are identical to the original nucleus. Meiosis, on the other hand, results in four nuclei, each having half the number of chromosomes of the original cell. In animals, meiosis only occurs in the cells that give rise to the sex cells (gametes), i.e., the egg and the sperm.

Differences Between Mitosis and Meiosis

The important difference between mitosis and meiosis are mentioned below:

Similarities Between Mitosis and Meiosis

The difference between Mitosis and Meiosis is quite apparent. They are two very different processes that have two different functions. Meiosis is required for genetic variation and continuity of all living organisms. Mitosis, on the other hand, is focused on the growth and development of cells. Meiosis also plays an important role in the repair of genetic defects in germline cells.

Mitosis is a form of cell division where the cell splits into two, each identical to the original cell.

Meiosis is a type of cell division that results in four cells, each having half the number of chromosomes of the original cell.

The difference between mitosis and meiosis are as follows:

4. State a few similarities between mitosis and meiosis.

The similarities between mitosis and meiosis are as follows: