Nutrition In Animals: How Animals Eat Their Food?

Animals derive their nutrition either by eating plants directly (herbivores), or indirectly by eating animals which have consumed plants (carnivores). Some animals feed on both plants and animals; these animals are termed as omnivores.  All organisms require food for their survival and growth.

Food has different components, called nutrients, like carbohydrates, fats, minerals, proteins, and vitamins, which are required for the maintenance of the body. These components are complex and cannot be used directly, so they are broken down into simpler components by the process of digestion. 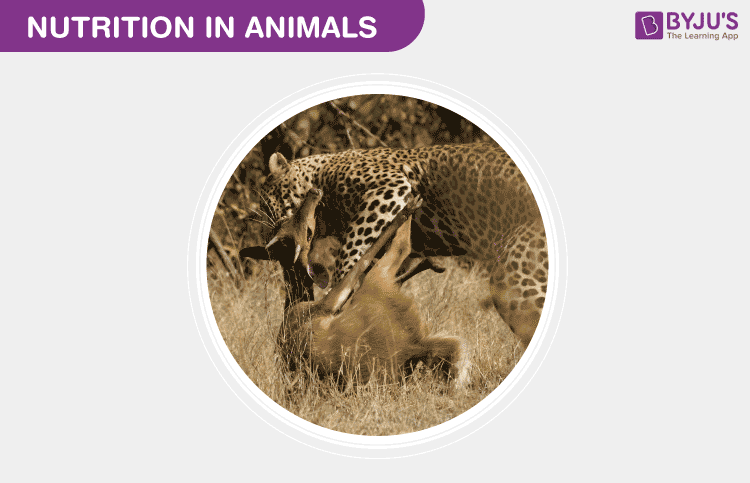 Nutrition in animals depends upon the feeding habits of the animals. The process of taking in food is called ingestion. The method of ingestion is different in different animals. For example-Bees and hummingbirds suck nectar from plants, python swallows its prey and cattle feed on grass.

Different feeding habits of animals are the result of evolution. Among the terrestrial animals, the earliest forms were large amphibians that ate fish. While amphibians like frogs fed on small fish and insects, the reptiles began feeding on other animals and plants.

The specialization of organisms towards specific food sources and of course specific ways of eating is one of the major causes of evolution of form and function. For example, the difference in mouthparts and teeth in whales, mosquitos, tigers, and sharks or distinct forms of beaks in birds, such as in hawks, woodpeckers, pelicans, hummingbirds, and parrots are results of adaptation to different types of eating by these animals.

Animals can be divided into the following groups depending upon their food habits:

Herbivores: Herbivores are animals that depend upon plants and fruits for their nutrition. Cows, goats, sheep, buffaloes, etc. are herbivores.

Carnivores: Carnivores are animals that depend upon other animals for food. Lion, tigers, wolfs are some of the carnivores.

Omnivores: These include organisms that eat both plants and animals. Humans, bear, dogs, crow are omnivores.

Types of Nutrition  in Animals

The different types of nutrition in animals include:

Process of Nutrition in Animals

The process of nutrition in animals involves the following steps:

Ingestion is the process of taking in food.

In this process, the larger food particles are broken down into smaller, water-soluble particles.  There are physical or chemical for digesting food.

The digested food is absorbed in the bloodstream through the intestinal wall.

The absorbed food is used for energy, growth and repair of the cells of the body.

The undigested food is removed out of the body in the faeces. This process is known as egestion.