The peristaltic movement also called as the Peristalsis refers to the contraction and relaxation of the food in the oesophagus and the food pipe and the food is forced down the track to the stomach. This movement is involuntary and is necessary for the movement of food down the stomach and bowels down the anus.

The peristaltic movement is initiated from the oesophagus when the food is completely swallowed which includes the reflexive action of the longitudinal and circular muscles greatly in the digestive sites and some other times in hollow tubes that are present in progressive wave-like contractions.

Peristalsis occurs in the oesophagus, intestines, and stomach and the waves could be long, short, continuous or continual that transit within the complete length of the organs, basis their location. 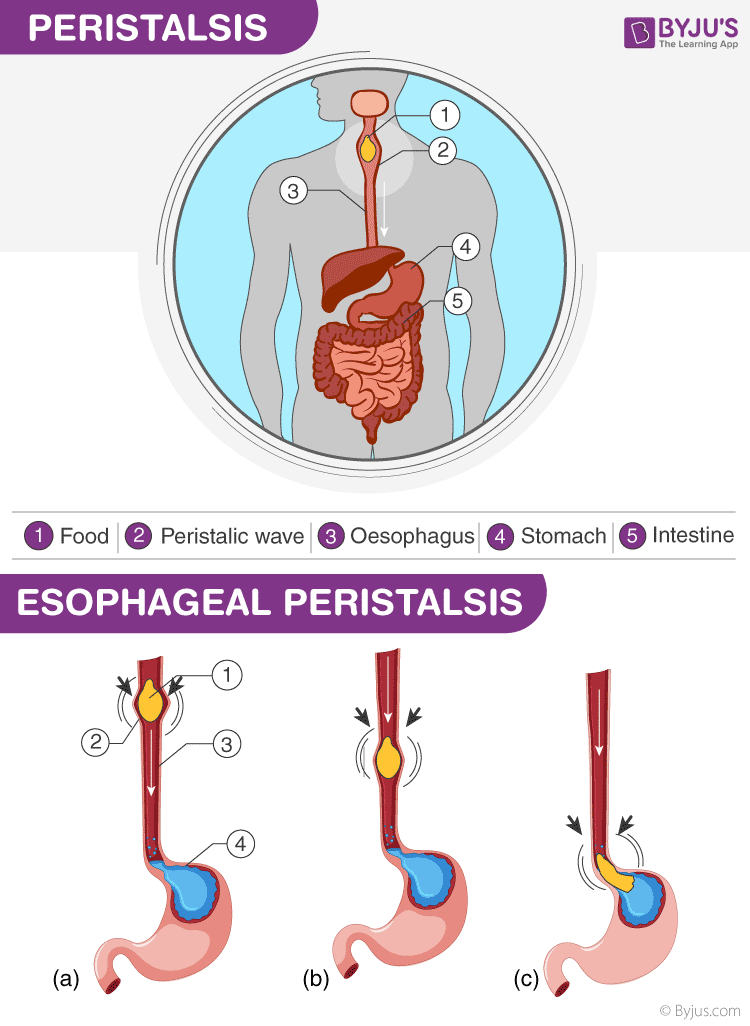 Peristaltic waves in oesophagus start from the upper position of the tube and pass into the complete length and impel the food into the stomach. This could be termed as Esophageal Peristalsis.

The food particles left behind the oesophagus begins with the secondary peristaltic waves that eliminate leftover particles. A single wave moves along the complete length of the tube. In cud-chewing animals like cattle, sheep, giraffes, and camels the reverse peristalsis happens such that the food is brought again to the mouth for chewing.

The peristaltic waves get disappeared after the stomach gets filled. The excess fats present in the food particles stop these movements until it gets diluted with gastric juices. These waves help in mixing the stomach content and drive the food into the small intestine. Normally, two to three waves exist at once in separate areas of the stomach. 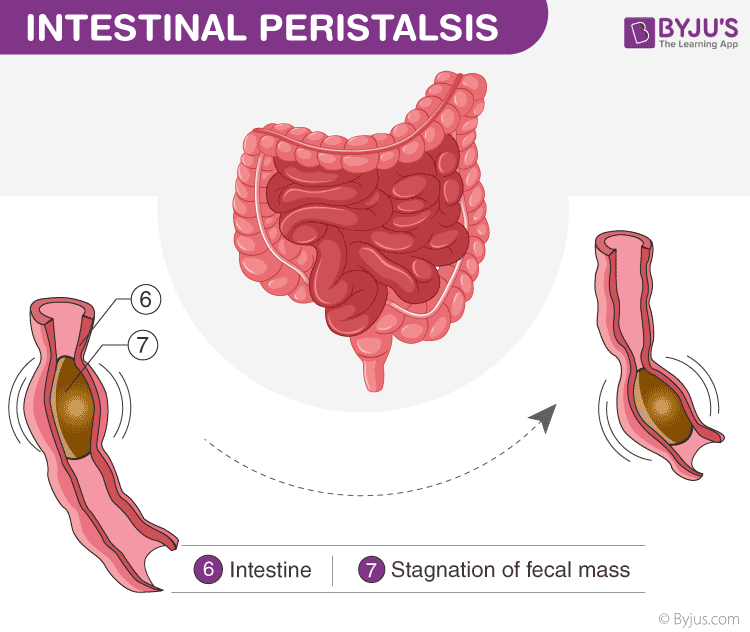 The stimulation of smooth muscle tissues for the existence of food particles in the small intestine is responsible for contractions that travel from the restorative point in both directions is termed as Intestinal Peristalsis.

Usually, they are found in the small intestine and move in varying distances. These expose food to the intestinal wall for immersion and keep moving forward.

Peristalsis not only helps in the movement along the oesophagal, digestive tract and the intestines but it also brings about movement of urine. Peristalsis is observed in two of the urinary tract tubes to bring about the motion of liquids right from the kidneys up to the bladder. The liquid, due to the peristaltic movement, eliminates from the body through structures called the urethra in the form of urine.

The stomach releases gastric juices as soon as we ingest food into the mouth. These gastric juices bring about the action of dissolving food upon arriving at the stomach which initiates the digestion process.

The food that is chewed and swallowed is referred to as bolus. It blends with the gastric juices that are secreted by the specialized glands that are situated in the stomach lining which include the cardiac glands which are present at the upper part of the stomach, the oxyntic glands situated in the main body of the stomach and the pyloric gland situated in the lowest part of the stomach.
Every gland contains specialized cells that produce particular components which are collectively called as the gastric juices. The neck cells produce mucus and bicarbonate, hydrochloric acid is produced by parietal cells, pepsinogen is secreted by chief cells, several hormones are responsible to secrete enteroendocrine cells.
Gastric juices are composed of the following constituents – electrolytes, water, hydrochloric acid, mucus, enzymes, and intrinsic factor.

It is a wave of intestinal contraction in a direction that is reversed to the normal, following which the contents present in the tube are forced in a backward direction, known as anti-peristalsis or reverse peristalsis.

It is the converse of the contractions of the involuntary smooth muscles and occurs as a precursor to the action of vomiting. Irritation of the stomach, in particular, food poisoning, triggers the emetic centre of the brain which in response flags an immediate vomiting reflex.

Peristalsis is a wave-like motion which brings about the movement of food and liquid through muscle contractions. It is an involuntary action of the muscles and hence cannot be under one’s will. But, the muscles that are involved in peristalsis, the smooth muscles, function when they are triggered to do so.

The process of peristalsis is important in digestion and in some conditions, it does not function properly. In such cases, when there is no peristalsis, a person faces diarrhoea or constipation. These are usually subtle signs indicating dysfunctioning of the peristalsis motion. It can emerge as a result of a medication or due to a condition known as motility disorder. The condition of motility disorders can be difficult to treat, hence needs to be taken care of.
To know more about peristalsis, its definition, and function, keep visiting BYJU’S website.

Micturition – The Process Of Urination