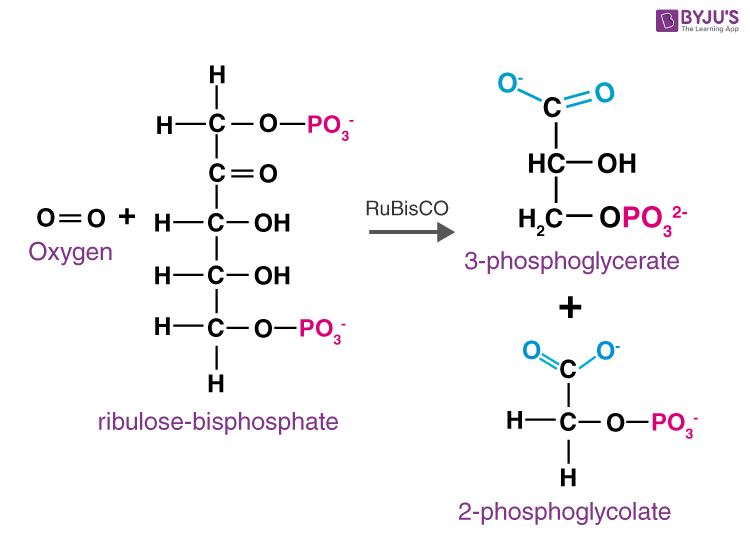 Photorespiration is the chemical processes that occur within a living organism of phosphoglycolate that is produced during oxygenation catalyzed by the enzyme RubisCO and inhibits photosynthesis by interfering with CO2 fixation by RubisCO.

Photorespiration is influenced by high temperature as well as light intensity and accelerating the formation of glycolate and the flow through the photorespiratory pathway.

Photorespiration causes a light-reliant acceptance of O2 and discharge of CO2 and is related to the creation and metabolism of a minute particle named glycolate.

When the carbon dioxide levels inside the leaf dip to about 50 ppm, RuBisCO begins combining Oxygen with RuBP as an alternative of Carbon dioxide.

The final result of this is that as an alternative to manufacturing 2 molecules of 3C- PGA units, merely one unit of PGA is fashioned with a noxious 2C molecule termed as phosphoglycolate.

To purge themselves of the phosphoglycolate the plant takes some steps. Primarily, it instantly purges itself from the phosphate cluster, transforming those units into glycolic acid. After that, this glycolic acid is transferred to the peroxisome and then transformed into glycine. The conversion of glycine into serine takes place in the mitochondria of the plant cell. The serine produced after that is used to create other organic units. This causes loss of carbon dioxide from the flora as these reactions charge plants energy.

To avert this procedure, two dedicated biochemical reactions were necessary to evolve in the flora of our world:

Plants that propagate in warm, arid climates similar to sugarcane and corn have developed a dissimilar system for carbon dioxide fixation. The structure of the leaves of these plants is dissimilar to that of a normal leaf. They are known to display Kranz anatomy. Dense-walled parenchyma cells termed as bundle sheath cells surround the phloem and xylem of these leaves where the maximum amount of photosynthesis happens.

This section of flora makes use of a procedure akin to the C4 section apart from the fact that they take carbon dioxide in nocturnal hours convert it into malic or aspartic acid. The vacuoles of their photosynthetic cells provide a location to store them. As soon as the sun shines these plants shut their stomata and disintegrate the malic acid to keep the carbon dioxide ratio high enough to avert photorespiration. This permits the leaves to have their stomata shut with the intention of preventing withering. This section of flora doesn’t display Kranz anatomy.

For more information about the Photorespiration, its process and other related topics, visit us at  BYJU’S Biology.

Q.4.What is the function of RuBisCO in photorespiration?

Sol. In photorespiration, RuBisCO catalyses the oxygenation of RuBP to one molecule of PGA and phosphoglycolate.

Q.5.What is the difference between photosynthesis and photorespiration?