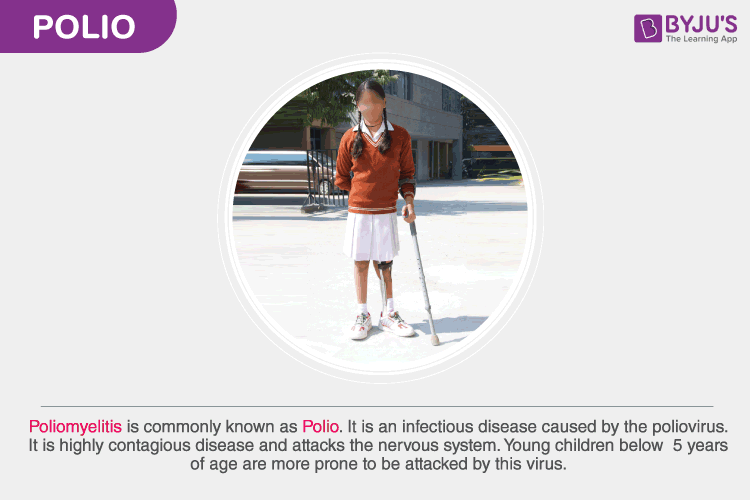 According to the World Health Organization (WHO), one among 200 polio infections results in permanent paralysis and this disease has been eradicated thanks to the development of a polio vaccine. The most recent WHO poll, in 2010, reported only 1,352 cases of polio worldwide. (WHO).”

Polio also called as Poliomyelitis. It is a viral disease that destroys the nerve cells present in the spinal cord, causing paralysis or muscle weakness to some parts of the body. It is a contagious disease affecting the nervous system and is caused by Picornaviridae – a poliovirus.

1) Through the faecal-oral route.

2) By contaminated water or food.

This virus primarily grows and multiplies in the intestine, from where it can attack the nervous system and will cause polio and paralysis on an advanced level.

Poliomyelitis in nothing but the scientific term or synonym of the disease Polio. In very rare cases it causes muscle weakness resulting in an inability to move or paralysis. Poliovirus can spread from person to person or by food or water containing human faeces and less commonly from infected saliva.

There are three types of polio infections:

1) Subclinical: This type of polio do not experience any symptoms as this does not affect the central nervous system – the brain and spinal cord. 95 per cent of polio cases identified are usually subclinical.

2) Non-paralytic: This type of polio does affect the central nervous system, but does not result in paralysis.

3) Paralytic: This is the most serious and rarest form of polio as it results in full or partial paralysis in the patient. Three types of paralytic polio are –

Signs and Symptoms of Poliomyelitis

As we discussed, there are three different types of polio, so the symptoms also vary. If a person is infected with Sub-clinical Polio then he can face the following symptoms

The following are the symptoms of Non-paralytic Polio –

To learn more about polio and other infectious diseases, visit BYJU’S Biology.