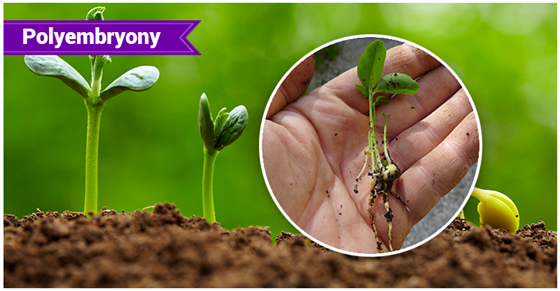 This is a natural phenomenon, quite common in both dicotyledons and monocotyledons.

As per the name Polyembryony – it refers to the development of many embryos.

When two or more than two embryos develop from a single fertilized egg, then this phenomenon is known as Polyembryony. In the case of humans, it results in forming two identical twins. This phenomenon is found both in plants and animals.

The best example of Polyembryony in the animal kingdom is the nine-banded armadillo. It is a medium-sized mammal found in certain parts of America and this wild species gives birth to identical quadruplets.

Let us learn more about the Polyembryony in plants, types and its importance.

This natural phenomenon was first discovered in the year 1719 by  Antonie van Leeuwenhoek in Citrus plant seeds.

There are two different types of polyembryony:

According to Webber, polyembryony is classified into three different types :

Polyembryony in Different Groups of Gymnosperms

In Cycadales, polyembryony is not a usual phenomenon. But in 1964, Rao reported the occurrence of simple polyembryony in Cycas Circinalis. In this species, two adjacent archegonia of the same ovule sometimes grow independently into two embryos and also rarely into two seedlings.

Various archegonia are present in the female gametophyte of Taxus. Simple polyembryony occurs due to the fertilization of many of the archegonia eggs. But, out of many, only a single embryo attains maturity. Cleavage of suspensor cells occurs. The suspensors separate from each other, and each of them may carry one or more embryonal units. Sometimes, groups of meristematic cells are observed at the base of the suspensor cells These groups of cells are called the rosette embryos. Further development, however, does not take place in these embryos.

All Gnetales exhibit polyembryony. Polyembryony is found to be of very high order in Gnetum. In this group, there are not only several prothalli and zygotes in each seed, but there is a multiplication of embryos from each zygote by the branching of the primary suspensors.