Retroviruses are viruses with RNA as genetic material. They belong to the family Retroviridae of Retroviruses. Once it has infected a cell, it converts its RNA into DNA by reverse transcription. This viral DNA is then inserted into the DNA of the host cell where it starts replicating. For eg., Human Immunodeficiency Virus (HIV).

Retrovirus meaning – It is a group of RNA viruses that inserts a DNA copy of its genome into the host cell in order to replicate.

It consists of two concentric outer circles of the lipid bilayer that contains the envelope protein complex embedded in it. The capsid proteins are hexagonal. The copies of the RNA genome are in the form of a loop bound by nucleoproteins.

The main virion components are:

The retroviral envelope is composed of lipids and glycoproteins encoded by env genes. It serves three important functions:

It consists of a dimer RNA with a 5′ cap and a 3′ poly-A tail. It has non-coding regions at the terminal which help in replication, whereas, the internal regions encode virion proteins for gene expression. 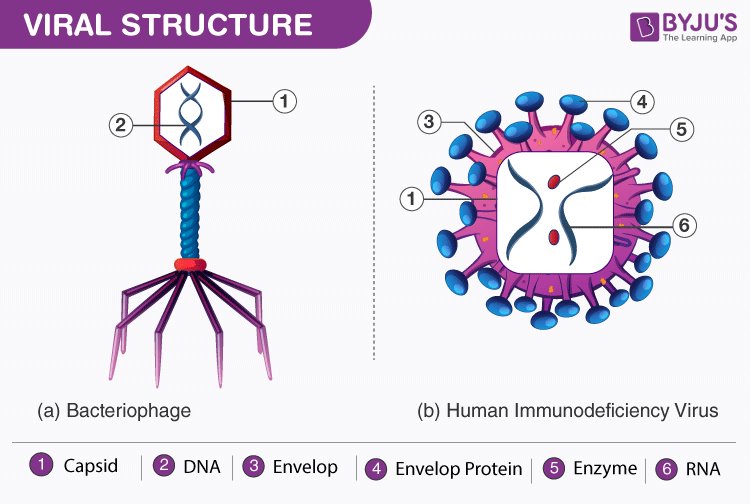 ↓ The virus infects a normal cell

Viral genetic material enters the nucleus of the host cell

Viral genes are transcribed and translated

New virus particles assemble and come out of host cell

New viruses can infect other cells

Retroviral vectors are genetically engineered retroviruses. They have been used for the transfer of genes into the mammalian host cells for over 20 years.

The retroviral vectors derived from the Moloney murine leukaemia virus are the most common retrovirus.

They can efficiently integrate and replicate inside the genome of the host cells. This is the reason why they have been used as vectors in various gene therapies.

The retroviral vectors are created by replacing the gag, pol and env genes with therapeutic genes.

One of the limitations of using retroviral vectors in gene therapy is that the integrase enzyme can insert the genetic material in the middle of the original genes of the host cell. This causes the disruption of the gene.

Difference Between Retrovirus And Virus

There are three types of retrovirus affecting humans:

HIV attacks the immune system of a person. It destroys the CD4 T-cells which are responsible for fighting against infections. Thus the immune system of a person becomes weaker and weaker. It can be transmitted through needles, body fluids, or from a mother to child during childbirth or breastfeeding. It cannot be cured through medications and treatment. AIDS is the last stage of HIV infection ad a person does not survive.

Type I and II are closely related to each other. A person infected with HTLV I virus develops acute T-cell leukaemia. It affects the spinal cord and causes a neurological disorder. It was the first human retrovirus to be discovered and can be transmitted through blood transfusion, needle sharing, breastmilk, or sexual contact. HTLV II is also associated with neurological disorders and some types of blood cancers. However, very less is known about this type of virus.

The endogenous retroviruses consist of the genetic material from those extinct viruses whose genetic composition is similar to that of the extant retroviruses. These viruses have been distributed among humans with evolution over the years. They contribute 5% of the human genome and are passed on from one generation to another.

For more information on Retrovirus and related topics, visit BYJU’S website or go to BYJU’S app for further reference.

Retroviruses are viruses that contain RNA as genetic material. They contain the enzyme reverse transcriptase which has the ability to transcribe RNA into DNA.

Name a retrovirus in humans?

How does a retrovirus work?

How can a retrovirus be treated?

Test your knowledge on Retrovirus
Q5