In molecular biology, central dogma illustrates the flow of genetic information from DNA to RNA to protein. It is defined as a process in which the information in DNA is converted into a functional product.

It is suggested that the information present in a DNA is essential to make up all proteins and RNA acts as a messenger that carries information through the ribosomes.

“Central dogma is the process in which the genetic information flows from DNA to RNA, to make a functional product protein.“ 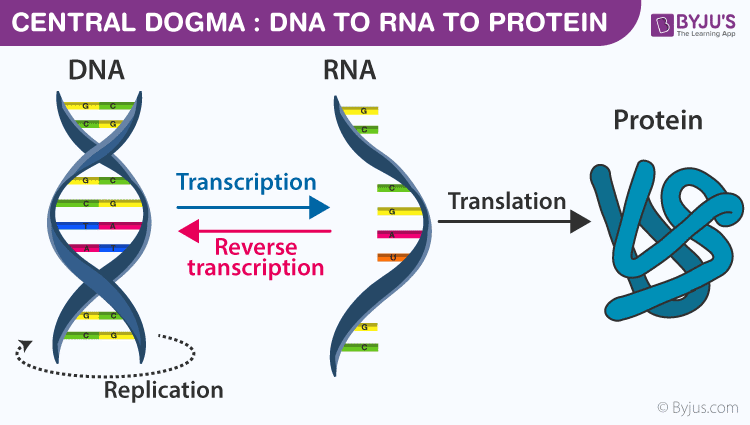 What is Central Dogma?

The central dogma illustrates the flow of genetic information in cells, the DNA replication, and coding for the RNA through the transcription process and further RNA codes for the proteins by translation.

The concept of a sequence of interaction can be understood through the framework. The most common includes biopolymers. The major category of biopolymers include Proteins, RNA and DNA that are further divided into general transfers, unknown transfers, and special transfers.

Special transfers occur in an exceptional case in the laboratory. General transfer occurs in almost all cells. It describes the regular flow of information through transcription and translation. Unknown transfers are said never to occur.

The new DNA strands are formed, with one strand of the parent DNA and the other is newly synthesized, this process is called semiconservative DNA replication.

Transcription is the process by which the information is transferred from one strand of the DNA to RNA by the enzyme RNA Polymerase. The DNA strand which undergoes this process consists of three parts namely promoter, structural gene, and a terminator.

The DNA strand that synthesizes the RNA is called the template strand and the other strand is called the coding strand. The DNA-dependent RNA polymerase binds to the promoter and catalyzes the polymerization in the 3′ to 5′ direction.

Translation is the process by which the RNA codes for specific proteins. It is an active process which requires energy. This energy is provided by the charged tRNA molecules.

Ribosomes initiate the translation process. The ribosomes consist of a larger subunit and a smaller subunit. The larger subunit, in turn, consists of two tRNA molecules placed close enough so that peptide bond can be formed at the expense of enough energy.

The mRNA enters the smaller subunit which is then held by the tRNA molecules of the complementary codon present in the larger subunit. Thus, two codons are held by two tRNA molecules placed close to each other and a peptide bond is formed between them. As this process repeats, long polypeptide chains of amino acids are synthesized.

Genetic code contains the information of the protein manufactured from RNA. There are basically three nucleotides and four nitrogenous bases, which collectively form a triplet codon that codes for one amino acid. Therefore, the number of possible amino acids range to 4 x 4 x 4 = 64 amino acids. There are 20 naturally existing amino acids.

The genetic code degenerates. This was explained by the features of the genetic code, according to which a few amino acids are coded by more than one codon thus causing them to degenerate. Each codon codes for only one specific amino acid and the codes are universal irrespective of the type of organism.

Out of the 64 codons, 3 are stop codons which stop the process of transcription and one of the codons is an initiator codon i.e. AUG coding for Methionine.