Thallophytes are a polyphyletic group of non-mobile organisms that are grouped together on the basis of similarity of characteristics but do not share a common ancestor. They were formerly categorized as a sub-kingdom of kingdom Plantae. These include lichens, algae, fungus, bacteria and slime moulds and bryophytes.

The division Thallophyta is classified into two subdivisions: Algae and Fungi.

They are chlorophyll-bearing thalloid. They are autotrophic and largely aquatic plants. On a side note, it has been observed that green algae form a symbiotic relationship with sloths that are native to the lush tropical rainforests of South America and Central America. Sloth fur is very coarse and readily absorbs water. As a result, sloth fur forms a moist and damp environment for the algae to flourish. The algae in return provide the sloth with extra nutrition and camouflage from predators. Example: Spirogyra.

They are achlorophyllous (meaning: they do not produce chlorophyll) heterotrophic thallophytes. Sometimes, to overcome this handicap, fungi may develop a symbiotic relationship with an alga or a cyanobacterium. The algae can produce food as it has chlorophyll and the fungi in return provide a safe environment that shields the algae from UV rays. Lichen is an example where two organisms act as a single unit.

Stay tuned with BYJU’S to learn more detail about Thallophytes and other groups of organisms. 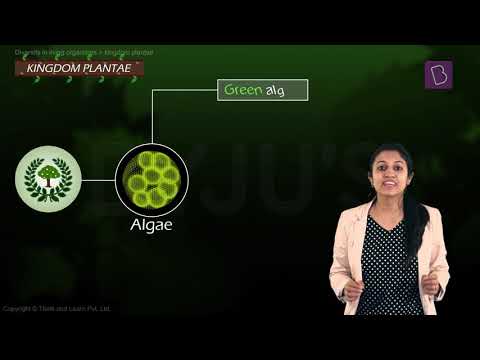 \
Test your Knowledge on Thallophyta!
Q5