“Camouflage refers to the use of a combination of materials, illumination or colouration that makes an animal blend in with its environment, or makes it harder to spot.  Some types of camouflage  are also used to disguises animals as something else.”

Camouflage is a natural phenomenon used by plants and animals to blend into their environment. Predators and prey alike use camouflage to avoid detection.

During this phenomenon, prey may change their skin colour or disguise themselves as per their surrounding colour so that other predators cannot detect them. Predators, such as the Stone Flounder, a flatfish, lay still on the ocean floor, buried under the sand, waiting for its prey. 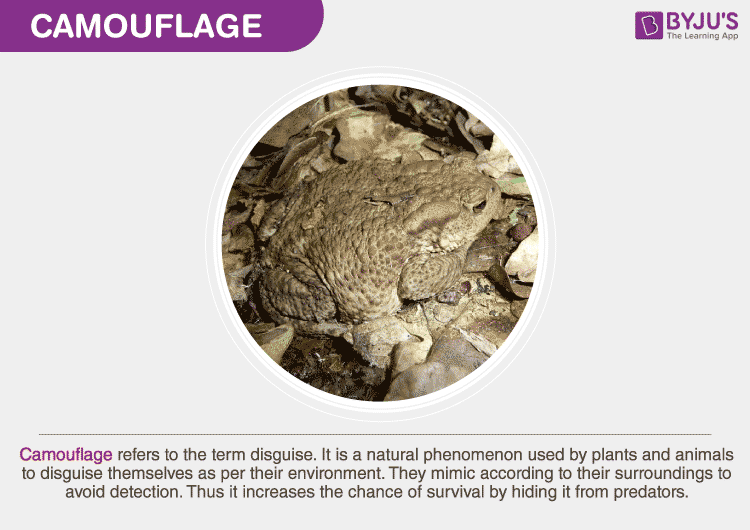 Camouflage can be created in two ways:

Octopus bears microscopic pigments called biochromes that absorbs and reflects light to change the real colour of the animal.

On the other hand, animals such as polar bears have specific physical structures in their hair that scatter light of all colours, and the animal appears white.

Camouflage animals are the animals that use camouflage to disguise themselves as per their surroundings to protect them from predators, or attack prey.

Animals mainly use camouflage to: 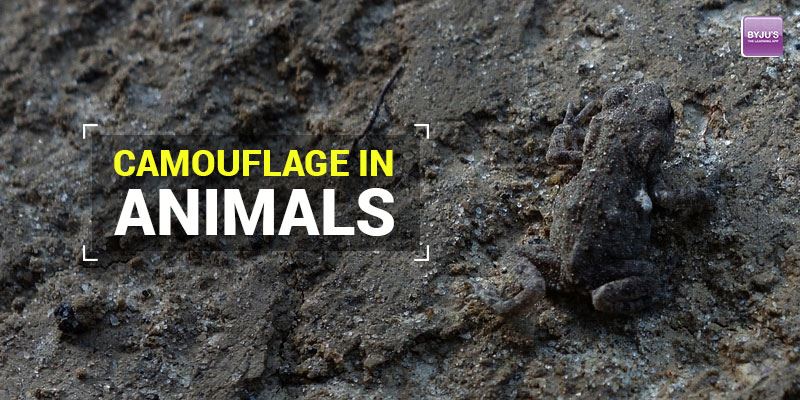 Types of Camouflage in Animals

Most of the forest habitat animals are brown, and animals of Arctic and tundra region are white. Here animal hides against a background of the same colour in order to protect themselves from predators and also for hunting their prey.

The dark spots or stripes found on the animal’s skin are mainly used to camouflage themselves and to escape from their predators.

The change in their appearance or colour which gets the blend with their surroundings by their colour, texture and shape.

Most of the animals copycat or mimic other animals to fool and escape from their predators. The mimicry can either be in appearance or behaviour or sound or odour.

Following are a few examples of camouflage animals:

What are the different types of camouflage?

The different types of camouflage include:

Give a few examples of camouflage animals.

How does camouflage work in animals?

The colour, shape or texture of an animal helps them to blend with the environment. The animals have specialised cells in their body that help them to rearrange the pigment molecules that changes the colour pattern in their skin.

Aposematism is the appearance of the animal that warns the predator that the animal is toxic, distasteful or dangerous.