Chapter 1 of CBSE Class 10 History deals with many of the issues visualised by Sorrieu and will look at the diverse processes through which nation-states and nationalism came into being in nineteenth-century Europe. The topics covered in this chapter are Rise of Nationalism in Europe, French Revolution, Nationalism and Imperialism. Class 10 CBSE History Notes of Chapter 1 are prepared by our subject matter experts. By going through these notes, students can get a good grip and a clear insight into all the essential concepts. These CBSE Class 10 History Notes of Chapter 1 will help students to understand the chapter in a better way. It works as the best revision resource during board exams.

Chapter 1: The Rise of Nationalism in Europe

For students convenience, we have compiled the CBSE Class 10 Social Science Notes consisting of Geography, History, Political Science and Economics subject at one place. They can access them for free just by visiting the page.

The Rise of Nationalism in Europe

Frédéric Sorrieu, a French artist, in 1848 prepared a series of four prints visualising his dream of a world made up of democratic and Social Republics.

During the nineteenth century, nationalism emerged as a force which brought huge changes in the political and mental world of Europe. The end result of these changes was the emergence of the nation-state.

The French Revolution and the Idea of the Nation 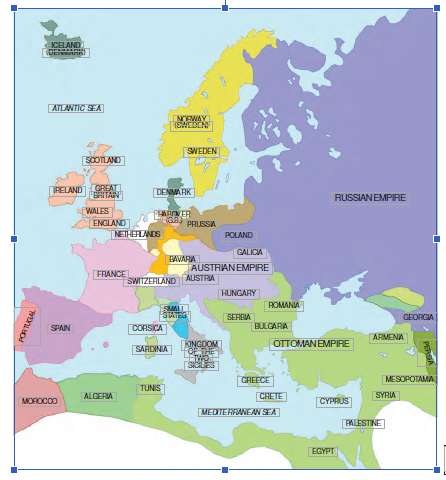 The Making of Nationalism in Europe

Germany, Italy and Switzerland were divided into kingdoms, duchies and cantons whose rulers had their autonomous territories.

The Aristocracy and the New Middle Class

The Aristocracy was the dominant class on the continent politically and socially. The majority of the population was made up of the peasantry. Industrialisation began in England in the second half of the eighteenth century. New social groups came into being: a working-class population and middle classes made up of industrialists, businessmen, professionals.

What did Liberal Nationalism Stand for?

A New Conservatism after 1815

In July 1830, Bourbon Kings were overthrown by liberal revolutionaries who installed a constitutional monarchy with Louis Philippe at its head. The July Revolution sparked an uprising in Brussels which led to Belgium breaking away from the United Kingdom of the Netherlands. In 1821, Greeks struggled for independence.

The Romantic Imagination and National Feeling

Europe faced economic hardships in the 1830s. The first half of the nineteenth century saw an enormous increase in population all over Europe. The rise of food prices or a year of bad harvest led to widespread pauperism in town and country. In 1848, food shortages and widespread unemployment brought the population of Paris out on the roads.

The Revolution of the Liberals

In 1848, a revolution led by the educated middle classes was underway. Men and women of the liberal middle class demanded creation of a nation-state on parliamentary principles – a constitution, freedom of the press and freedom of association.

A large number of political associations came together in Frankfurt to vote for an all-German National Assembly. On 18 May 1848, 831 elected representatives marched to take their places in the Frankfurt parliament convened in the Church of St Paul.

The Constitution drafted for German nation was headed by a monarchy, subject to a Parliament. The Crown was offered to Friedrich Wilhelm IV, King of Prussia but he rejected it and joined other monarchs to oppose the elected assembly. The Middle Class dominated the Parliament and a large number of women participated in liberal movement.

Women formed their own political associations, founded newspapers and took part in

political meetings and demonstrations, but they were still denied suffrage rights during the election of the Assembly.

In the years after 1848, the autocratic monarchies of Central and Eastern Europe began to introduce the changes that had already taken place in Western Europe before 1815. Thus, serfdom and bonded labour were abolished both in the Habsburg dominions and in Russia.

The Making of Germany and Italy

Germany – Can the Army be the Architect of a Nation?

Nationalism in Europe moved away after 1848 and Germany and Italy came to be unified as nation-states. Prussia took over the leadership of the movement for national unification. The architect of this process was its chief minister, Otto von Bismarck, carried out with the help of the Prussian army and bureaucracy.

In January 1871, the Prussian King, William I, was proclaimed German Emperor. An assembly was held to proclaim the new German Empire. The process of nation-building demonstrated the dominance of Prussian state power. The currency, banking, legal and judicial system in Germany were modernised. 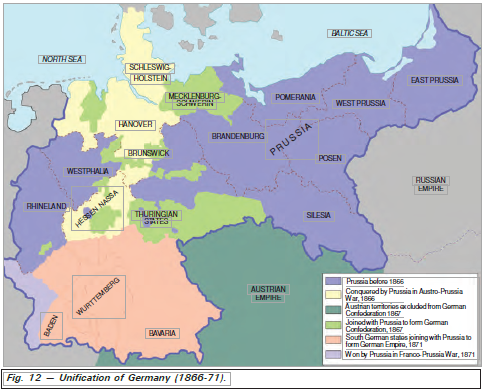 Italy was divided into seven states, in the middle of the nineteenth century, and among all the seven states, Sardinia-Piedmont, was ruled by an Italian princely house. All the regions were dominated by different kings. In the 1830’s Giuseppe Mazzini formed a secret society called Young Italy.

The movement was led by Chief Minister Cavour. In 1859, Sardinia-Piedmont defeated Austrian forces. In 1860, they marched into South Italy and the Kingdom of the Two Sicilies and succeeded in winning the support of the local peasants. In 1861 Victor Emmanuel II was proclaimed king of united Italy.

The Strange Case of Britain

Great Britain was the model of the nation and prior to the eighteenth century there was no British nation. The nation became powerful as it steadily grew in wealth, importance and power.

The Act of Union (1707) between England and Scotland resulted in the formation of the ‘United Kingdom of Great Britain’ meant, in effect, that England was able to impose its influence on Scotland. In 1801, Ireland was forcibly incorporated into the United Kingdom. The symbols of the new Britain – the British flag (Union Jack), the national anthem (God Save Our Noble King), the English language – were actively promoted.

In the eighteenth and nineteenth centuries artists represented a country as a person and nations as female figures. During the French Revolution, female figures portray ideas such as Liberty, Justice and the Republic. Liberty is represented as a red cap, or the broken chain, Justice a blindfolded woman carrying a pair of weighing scales.

Nationalism no longer retained after the last quarter of the nineteenth century. After 1871, the most tensioned area was called the Balkans a region comprising modern-day Romania, Bulgaria, Albania, Greece, Macedonia, Croatia, Bosnia-Herzegovina, Slovenia, Serbia and Montenegro.

Ottoman Empire made the Balkans region explosive and all through the nineteenth century they strengthened themselves through modernisation and internal reforms. Due to various conflicts the Balkan became an area of intense conflict.

During this period, intense rivalry built among the European powers over trade and colonies as well as naval and military might which led to a series of wars in the region and finally the First World War.

In 1914, Europe was disastered because of Nationalism, aligned with imperialism. Anti-imperial movements were developed but they all struggled to form independent nation-states. But the idea of ‘nation-states’ was accepted as natural and universal.

The desire/wish of a group of people who have similar race, culture, language to form a country.

How to induce patriotism in a person?

Children and young adults must be taught at a young age about the importance of patriotism. Love for one’s own country must be instilled in every child’s mind and heart.

How to protect our Nation from criticism?

1. Do not speak ill of your country 2. Do not misuse your national flag 3. Be polite and convey your positive thoughts about your country to other nationals