In Chapter 4 of CBSE Class 10, History students will learn the history of Britain, the first industrial nation, and then India, where the pattern of industrial change was conditioned by colonial rule. The chapter begins with explaining the scenario before the Industrial Revolution and how it changed over time in terms of labour, setting up of factories, etc. Some of the other topics explained in the chapter are Industrialisation in the colonies, industrial growth, market for goods, workers life, etc. In this article, we have compiled CBSE Class 10 History notes of Chapter 4 – The Age of Industrialisation. All the essential concepts are covered in these notes, as discussed in the chapter. Students can also download these notes in PDF format.

Chapter 4 The Age of Industrialisation

Students can also go through the notes of CBSE Class 10 Social Science of Geography, History, Political Science and Economics. These notes will help them in preparing well for the board exam.

Before the Industrial Revolution

Proto-industrialisation is referred to the phase which existed even before factories began in England and Europe. There was large-scale industrial production for an international market not based on factories. In the seventeenth and eighteenth centuries, merchants from Europe moved to the countryside, supplying money to peasants and artisans, requesting them to produce for an international market. Merchants were restricted to expand their production within towns because rulers granted different guilds the monopoly right to produce and trade in specific products. In the countryside, poor peasants and artisans eagerly agreed so that they could remain in the countryside and continue to cultivate their small plots. The Proto-industrial system was thus part of a network of commercial exchanges controlled by merchants.

The Coming Up of the Factory

In the 1730s the earliest factories in England were set up, but only in the late eighteenth century, the number of factories multiplied. Cotton was the first symbol of the new era and its production boomed in the late nineteenth century. Richard Arkwright created the cotton mill where costly machines were set up and all the processes were brought together under one roof and management.

The Pace of Industrial Change

First: In Britain, the most dynamic industries were cotton and metals. Cotton was the leading sector in the first phase of industrialisation up to the 1840s, followed by iron and steel industry. Second: The new industries found it difficult to displace traditional industries. Third: The pace of change in the ‘traditional’ industries was not set by steam-powered cotton or metal industries, but they did not remain entirely stagnant either. Fourth: technological changes occurred slowly.

James Watt improved the steam engine produced by Newcomen and patented the new engine in 1781. His industrialist friend Mathew Boulton manufactured the new model. Steam engines were not used in any of the other industries until much later in the century.

There was no shortage of human labour in Victorian Britain. Industrialists had no problem of labour shortage or high wage costs. Instead of machines industrialists required large capital investment. The demand for labour was seasonal in many industries. In all such industries where production fluctuated with the season, industrialists usually preferred hand labour, employing workers for the season.

Life of the Workers

The workers’ lives were affected by the abundance of labour in the market. To get a job, workers should have existing networks of friendship and kin relations in a factory. Till the mid-nineteenth century, it was difficult for workers to find jobs. In the early nineteenth century, wages were increased. The fear of unemployment made workers hostile to the introduction of new technology. Spinning Jenny was introduced in the woollen industry. After the 1840s, building activity intensified in the cities, opening up greater opportunities for employment. Roads were widened, new railway stations came up, railway lines were extended, tunnels dug, drainage and sewers laid, rivers embanked.

Industrialisation in the Colonies

The Age of Indian Textiles

In India, silk and cotton goods dominated the international market in textiles, before the age of machine industries. A variety of Indian merchants and bankers were involved in this network of export trade – financing production, carrying goods and supplying exporters. By the 1750s this network, controlled by Indian merchants, was breaking down. The European companies came into power – first securing a variety of concessions from local courts, then the monopoly rights to trade. The shift from the old ports to the new ones was an indicator of the growth of colonial power. European companies controlled trade through the new ports and were carried in European ships. Many old trading houses collapsed, and those who wanted to survive had to operate within a network shaped by European trading companies.

What Happened to Weavers?

The weavers were granted a loan to buy the raw materials once an order was placed. Weavers who took loans needed to hand over the cloth they produced to the gomastha. Weaving required the labour of the entire family, with children and women all engaged in different stages of the process. Earlier, supply merchants had a very close relationship with weavers, but new gomasthas were outsiders with no social link with the village.

In many places in Carnatic and Bengal, weavers set up looms in other villages where they had some family relation. In other places, weavers along with the village traders revolted, opposing the Company and its officials. Over time many weavers began refusing loans, closing down their workshops and taking to agricultural labour. By the turn of the nineteenth century, cotton weavers faced a new set of problems.

In 1772, Henry Patullo said that the demand for Indian textiles could never reduce since no other nation produced goods of the same quality. But, unfortunately, by the beginning of the nineteenth century, India witnessed a decline in textile exports. In the early nineteenth century, exports of British cotton goods increased dramatically. At the end of the eighteenth century, import of cotton piece-goods was restricted into India. In India cotton weavers faced two problems:

By the 1860s, weavers faced a new problem. They could not get sufficient supply of raw cotton of good quality. Even the raw cotton exports from India increased due to which the price increased. By the end of the nineteenth century, other craftspeople faced yet another problem. Factories in India began production, flooding the market with machine-goods.

In 1854, the first cotton mill in Bombay set up and went into production two years later. By 1862 four more mills were set up and around the same time jute mills came up in Bengal. The first jute mill was set up in 1855 and another one after seven years in 1862. In the 1860s, in north India, the Elgin Mill was started in Kanpur, and a year later the first cotton mill of Ahmedabad was set up. By 1874, the first spinning and weaving mill of Madras began production.

For More Information On The Industrial Revolution, Watch The Below Video: 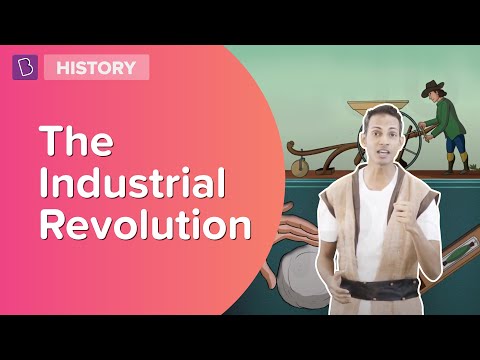 The history of trade started from the late eighteenth century when British in India began exporting opium to China and took tea from China to England. Some of the businessmen who were involved in these trades had visions of developing industrial enterprises in India. In Bengal, Dwarkanath Tagore made his fortune in the China trade. In Bombay, Parsis like Dinshaw Petit and Jamsetjee Nusserwanjee Tata built huge industrial empires in India. Seth Hukumchand, a Marwari businessman set up the first Indian jute mill in Calcutta in 1917. The opportunities of investments in industries opened up and many of them set up factories.

But due to colonial power, Indians were barred from trading with Europe in manufactured goods and had to export mostly raw materials and food grains – raw cotton, opium, wheat and indigo – required by the British. Three of the biggest European Managing Agencies are Bird Heiglers & Co., Andrew Yule, and Jardine Skinner & Co. who mobilised capital, set up joint-stock companies and managed them.

Where Did the Workers Come From?

employment spread, workers travelled great distances in the hope of work in the mills.

Even after the demand for workers increased, getting jobs was difficult. The numbers seeking work were always more than the jobs available. Most of the industrialists employed a jobber, which he brought from his village, to recruit new workers. Industrialists helped the jobber to settle down and provided them with money in need.

The Peculiarities of Industrial Growth

European Managing Agencies were interested in certain kinds of products such as tea and coffee. They established tea and coffee plantations and invested in mining, indigo and jute. These products are used only for export purposes. In the late nineteenth century, Indian businessmen began setting up industries. The yarn produced in Indian spinning mills was used by handloom weavers in India or exported to China. The pattern of industrialisation was affected by a series of changes. When the swadeshi movement gained support, nationalists boycotted foreign cloth. From 1906, Indian yarn exports to China declined since produce from Chinese and Japanese mills flooded the Chinese market. Till the end of the First World War, industrial growth was slow. The war completely changed the whole scenario and Indian mills took advantage of the situation. They had a vast market to supply war needs: jute bags, cloth for army uniforms, tents and leather boots, horse and mule saddles and a host of other items. The industrial production boomed over the years and after the war, Manchester could never recapture its old position in the Indian market.

Small-scale industries continued to predominate the rest of the country. Only a small proportion of the total industrial labour force worked in registered factories. The rest worked in small workshops and household units. Handicrafts production expanded in the twentieth century. In the twentieth century, handloom cloth production expanded. It happened because of technological changes as they started adopting new technology which helped them improve production without excessively pushing up costs.

Certain groups of weavers were in a better position than others to survive the competition with mill industries. Some of the weavers produced coarse cloth while others wove finer varieties. Weavers and other craftspeople who continued to expand production through the twentieth century did not necessarily prosper. They worked for long hours including all the women and children. But they were not simply remnants of past times in the age of factories. Their life and labour were integral to the process of industrialisation.

When new products are produced advertisements helped people to make products appear desirable and necessary. They tried to shape the minds of people and create new needs. Today we are surrounded by advertisements which appear in newspapers, magazines, hoardings, street walls, television screens. From the very beginning of the industrial age, advertisements played a part in expanding the markets for products, and in shaping new consumer culture.

Manchester industrialists put labels on the cloth bundles, to mark the quality. When buyers saw ‘MADE IN MANCHESTER’ written in bold on the label, they were expected to feel confident about buying the cloth. Some of the labels were made with images and were beautifully crafted.

Images of Indian gods and goddesses appeared on these labels. Printing calendars were started by manufacturers to popularise their products. In these calendars, figures of gods were used to sell new products. Later, advertisements became a vehicle of the nationalist message of swadeshi.

The age of industries has meant major technological changes, growth of factories, and the making of a new industrial labour force. Hand technology and small-scale production remained an important part of the industrial landscape.

Industrialization is the process by which an economy is transformed from a primarily agricultural one to one based on the manufacturing of goods.

What is the meaning ‘Market goods’?

What are the uses of ‘Industrial change’?