How are Solids Classified?

A solid interface is defined as a few atomic layers that separate two solids in intimate contact with one another, where the properties differ significantly from those of the bulk material it separates.

Based on their crystal structures, solids can be classified into the following categories:

However, crystalline solids can be further classified into molecular, ionic, metallic, and covalent solids. A brief introduction to the classification of solids is provided in this article.

An illustration detailing the classification of solids is provided below. 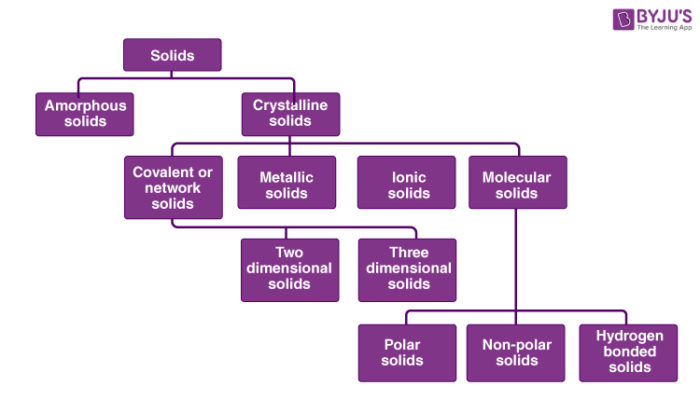 What are Crystalline Solids?

The solids featuring highly ordered arrangements of their particles (atoms, ions, and molecules) in microscopic structures are called crystalline solids.

These ordered microscopic structures make up a crystal lattice that accounts for the structure of the solid at any given point. Examples of crystalline solids include salt (sodium chloride), diamond, and sodium nitrate.

What are Amorphous Solids?

The solids in which the particles are not arranged in any specific order or the solids that lack the overall order of a crystal lattice are called amorphous solids.

The term ‘amorphous’, when broken down into its Greek roots, can be roughly translated to “without form”. Many polymers are amorphous solids. Other examples of such solids include glass, gels, and nanostructured materials.

An ideal crystal is defined as an atomic arrangement that has infinite translational symmetry in all the three dimensions, whereas such a definite definition is not possible for an ideal amorphous solid (a-solid). 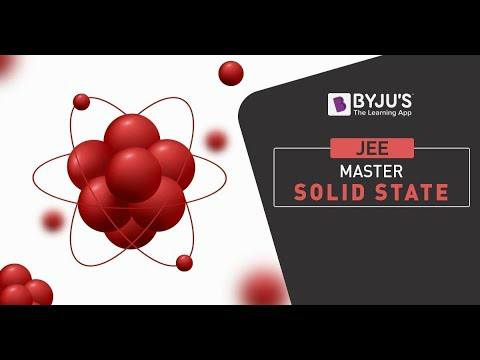 What is meant by crystalline solids?

Crystalline solids consist of atoms, ions, and molecules arranged in a strongly ordered microscopic arrangement in consistent and repeated three-dimensional structures, forming a crystal lattice that stretches in any direction.

What are the 7 types of crystals?

Seven crystal structures are available in total: triclinic, monoclinic, orthorhombic, tetragonal, trigonal, hexagonal, and cubic. A family of crystals is determined by groupings of lattices and lines.

Is coal crystalline or amorphous?

Graphite is one of three types of carbon which is crystalline, or crystal-forming. In compounds like coal and charcoal, carbon also occurs as an amorphous, or “shapeless,” form. Allotropes are called varying variants of the same substance. Some allotropes of crystalline carbon are, aside from graphite, diamond and fullerenes.

Is a diamond a crystal?

Diamond is the solid shape of the carbon molecule with its atoms arranged in a crystal arrangement called a cubic diamond. Diamond also has relatively high optical dispersion (capacity to scatter various wavelengths of light). Many natural diamonds have age ranging from 1 to 3.5 billion years.

Is wood amorphous or crystalline?

Have a pressing doubt regarding the subject? Try the live chat for any questions anytime and our consultants will get back to you.