Conformation is a property of atoms in which rotation of groups about a carbon-carbon single bond takes place. The rotation usually results in different spatial arrangements of the atoms. Likewise, conformation isomers are a type of stereoisomers where we can convert one isomer to another one, just by rotating it around a single bond. Let us further understand the concept with the help of an example:

Butane is an alkane with the presence of C-C bonds. Normally, when we rotate the molecule of butane at the axis of the C-C bond, it shows different conformation isomerism. Generally, Butane has four conformation isomers which are fully eclipsed, gauche, eclipsed, and anti butane conformational isomers. Lets us discuss these isomers below.

Usually, each conformer is also interconverted to the same forms by rotating the isomer around the central carbon single bond. Eclipsed conformer can be converted back into gauche conformation by rotating it 60 degrees and when an eclipsed is rotated by 180 degrees it forms anti- conformer. Rotation of anti butane by 120 degrees again leads to the formation of the gauche conformer.

The ranking of the conformation isomers is given below taking into account the energy levels from lowest to highest. It is given as;

This can also be visualized using an energy diagram. 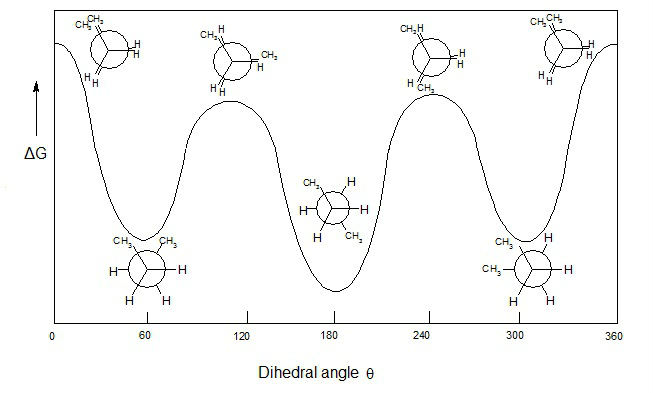