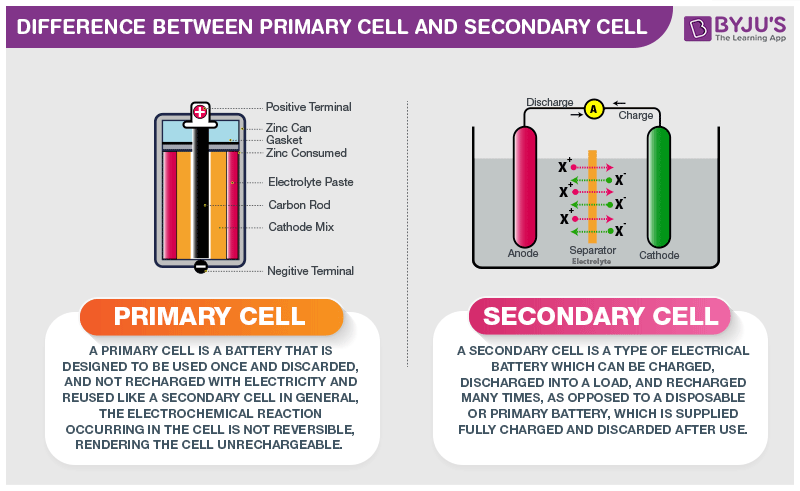 Primary cells have high density and get discharged slowly. Since there is no fluid inside these cells they are also known as dry cells. The internal resistance is high and the chemical reaction is irreversible. Its initial cost is cheap and also primary cells are easy to use.

Secondary cells have low energy density and are made of molten salts and wet cells. The internal resistance is low and the chemical reaction is reversible. Its initial cost is high and is a little complicated to use when compared to the primary cell.

Primary cells are the ones which cannot be recharged and have to be discarded after the expiration of the lifetime whereas, secondary cells need to be recharged when the charge gets over. Both the types of battery are used extensively in various appliances and these cells differ in size and material used in them.

These were some difference between Primary cell and Secondary cell. If you wish to find out more, download BYJU’S – The Learning App.

Give some examples of secondary cells.

Give some examples of primary cells.

Alkaline batteries and dry cells are examples of primary cells.

What is the Function of a Salt Bridge in an Electrochemical Cell?

The salt bridge completes the circuit of an electrochemical cell, thereby allowing the flow of current through it. It also helps to maintain the overall electrical neutrality of the cell.

What is Standard Electrode Potential?

The standard electrode potential of an electrode can be defined as the potential difference that arises between the electrode and the electrolyte under standard conditions (Temperature = 298K, pressure = 1 atm, unity concentration of reacting species).

What are the Key Differences between Cathode and Anode?