What is Hydrogen sulfate?

Hydrogen Sulfate is an anion with the chemical formula HSO4–. It forms sulfuric acid when exposed to water. HSO4– very small hydrogen sulfate ion. Sodium Bisulfate which is the pure substance NaHS04 melts at 185°C and begins to lose water with a good deal of spattering. It consists of sulfur atom in the center surrounded by four oxygen atoms form a tetrahedral arrangement. The structure is similar to the structure of methane. 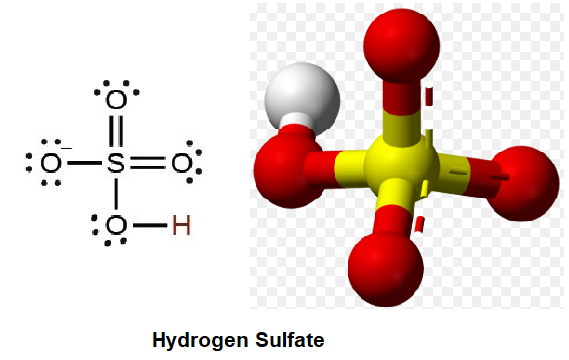 How are hydrogen sulfate and sulfuric acid different?

Is hydrogen sulfate a strong or a weak acid?

The hydrogen sulfate ion, also known as the bisulfate ion, is an acid. It can be classified as a weak acid. Part of the reason for its acidity is due to its electronegative oxygen isolating electron density away from the oxygen-bonded hydrogen atom.

What is the charge held by hydrogen sulfate molecules?

The magnitude of the net charge held by hydrogen sulfate molecules is -1. Upon gaining a proton, this compound forms sulphuric acid, whose chemical formula is H2SO4.

Take up a quiz on Hydrogen sulfate
Q5