The removal of the alcohol, resulting from the reduction of a cheap aldehyde or ketone used as the oxidant, meets the problem of alcohol being less volatile than the corresponding carbonyl compound.

Ketones are an organic compounds containing carbonyl groups (C=O). The general formula for a ketone is R(C=O)R’, where R and R’ can be alkyl or aryl groups. They are classified into two categories by their substituents: symmetrical ketones (when two identical groups are attached to the carbonyl group) and asymmetrical ketones (when two different groups are appended to the carbonyl group). Many methods exist for the preparation of ketones at industrial scale and in laboratories. Standard methods include oxidation of alcohol, hydrocarbons, etc. Some general methods for the preparation of ketones are explained below:

1. Preparation of Ketones from Acyl Chlorides

2. Preparation of Ketones from Nitriles 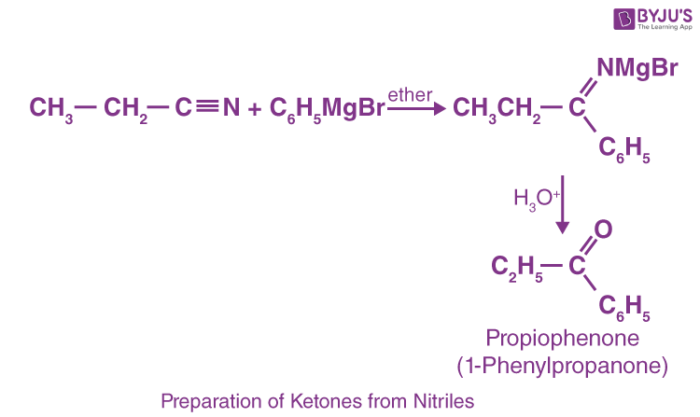 3. Preparation of Ketones from Benzenes or Substituted Benzenes

Electrophilic aromatic substitution of a benzene ring with acid chlorides in the presence of a Lewis acid such as AlCl3 results in the formation of ketones. This reaction is popularly known as Friedel Craft’s acylation reaction.

4. Preparation of Ketones by Dehydrogenation of Alcohols

Dehydrogenation of alcohol is a reaction in which two hydrogen molecules are removed from an alcohol molecule upon oxidation. During oxidation of alcohol both C-O and O-H bonds are broken for the formation of C=O bonds. Secondary alcohols in the presence of strong oxidizing agents undergo dehydrogenation to produce ketones. 1. How do you identify a ketone?
Ans: The iodoform test shows the presence of an aldehyde or ketone in which a methyl group is one of the groups directly attached to the carbonyl carbon. A ketone like this is considered a ketone of methyl.

2. How do you test for ketones in chemistry?
Ans: Use Tollens ‘ reagent (the silver mirror test) to conduct the experiment, add a few drops of aldehyde or ketone to the freshly prepared reagent, and steam gently for a few minutes in a hot water tub. A grey silver precipitate or a silver mirror on the test tube is formed by the colourless solution.

3. Do ketones give Fehling’s test?
Ans: The substance to be checked is added to the solution of the Fehling and heats the mixture. Aldehydes are oxidized, but ketones do not react unless they are alpha-hydroxy-ketones. Fehling’s can be used for blood glucose monitoring to diagnose diabetes.

4. Do ketones give Schiff’s test?
Ans: Schiff’s reagent A reagent used for aldehyde and ketone testing; it consists of a sulphur dioxide decolourised fuchsin dye solution. Aliphatic aldehydes quickly recover the colour, whereas the reagent is not affected by aromatic ketones.

5. What is Schiff’s reagent formula?
Ans: Schiff reagent is used to detect aldehyde and ketonic group existence. It consists of sulphurous acid decolorized fuchsin dye. The sudden presence of a red/pink colour identifies an aliphatic aldehyde. It takes time for aliphatic ketones and aromatic aldehydes to bloom in a slowly pink colour.