Alkenes consist of a large number of loosely held pi bonds. Due to the presence of such bonds they exhibit addition reactions. In addition reaction, the electrophiles (electron seeking species) are added to the double-bonded compounds which result in the formation of the additional product. Under special conditions, in some cases, it has the ability to undergo free radical substitution reactions also. Ozonolysis reaction and oxidation reaction is also prominently exhibited it.

Reactions of alkenes with different compounds

Alkanes are formed on addition of one molecule of dihydrogen to alkenes in the presence of different types of catalysts such as palladium, nickel or platinum.

Vicinal dihalides are the products formed when alkenes react with halogens such as bromine, chlorine. Iodine is an exception as it does not exhibit addition reaction under normal conditions. Bromine solution loses its reddish-orange colour in carbon tetrachloride solution due to the addition of bromine to an unsaturated site. Hence this reaction is used as a test for the presence of unsaturation in a solution. The reaction of alkenes with halogens is an example of the electrophilic addition reaction.

As per Markovnikov rule when unsymmetric alkene is added to hydrogen halide, halogen gets attached to the carbon having less number of hydrogen.

As per anti-Markovnikov rule unsymmetric alkenes add hydrogen halide in the presence of peroxide.The reverse of Markovnikov rule occurs which results in the attachment of halogen to a carbon containing more number of hydrogen.

It is made to react with water in the presence of few drops of sulphuric acid.This results in the formation of alcohols as per Markovnikov rule.

To learn more about this topic and other related topics, such as the electrophilic addition reactions of alkenes, register with BYJU’S now! 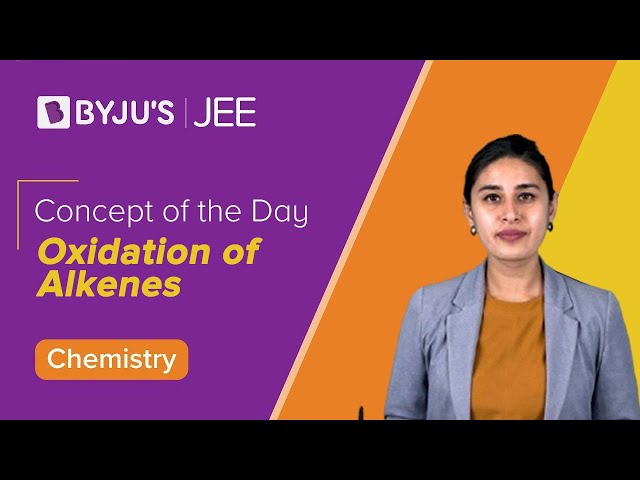 Test your Knowledge on Chemical properties of alkenes!
Q5