Water has the capability to exist in three states. In solid-state, it exists as ice, in the liquid state as water and in the gaseous state as water vapour. Ever wondered the reason behind the change of state or what happens to the particles during the change of state? Change in the states of matter mainly depends on temperature and pressure. This article briefly deals with the reasons for the change in the states of matter from one form to the other. 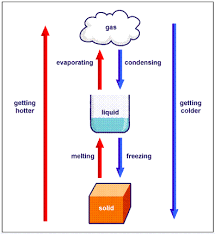 Change in States of Matter

Change in states of matter

When an adequate amount of heat is supplied to liquids, the particles of the liquid begin to move with greater speed. At a particular temperature, the particles possess enough energy to break away from the force of attraction that exists between the particles. At this point, the particles undergo a phase change and exhibit the vapour phase as well as the liquid phase. The point at which this happens is called the boiling point. This process is called evaporation. Sometimes solids get converted into gaseous state directly and the phenomenon is called sublimation.

All forms of matter have the capability to change from one state of matter to another. The change is mainly due to the difference in the forces that hold the particles together. It can be concluded that temperature and pressure play an important role in determining the state of a matter i.e. whether it is in solid, liquid or gaseous state at a given set of temperature and pressure. To understand each phase change in detail download BYJU’S – The Learning App.