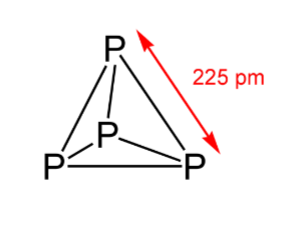 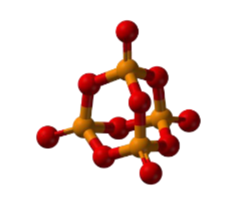 α-black and β-black are two forms of black phosphorus. When red phosphorus is heated in a sealed tube at 803K, an α-black form is formed. It can be sublimed in the air and has either rhombohedral crystals or opaque monoclinic. It does not oxidize in the air. When white form is heated under high pressure at 473 K β-Black is formed. It does not burn in the air up to 673K. Structure of the black form of this substance is shown below: 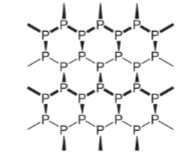 Why is phosphorus p4?

Since it can form three bonds, phosphorus can form a P4 white phosphorus tetrahedron, while sulphur can only form two bonds. Hence, sulphur only forms rings and chains. A cross-linked, polymeric chain of atoms is the most soluble allotrope of phosphorus, red phosphorus.

Which phosphorus is used in matchstick?

A small amount of the red phosphorus on the hitting surface is converted into white phosphorus as the match is lit, which then ignites. The potassium chlorate is ignited by the heat from this, and the match head explodes into flame.

Which allotrope of phosphorus is poisonous?

The least stable, the most reactive, the most volatile, the least dense, and the most toxic of the allotropes is white phosphorus. It eventually changes to red phosphorus, a light and heat-accelerated transition.

Why is phosphorus called the devil’s element?

Owing to its eerie glow, ability to burst into fire, and since it was the 13th known chemical, some texts refer to phosphorus as the “Devil’s Chemical.” Pure phosphorus, like other non-metals, assumes substantially different shapes. At least five phosphorus allotropes exist.

What is special about phosphorus?

Phosphorus is a vital plant nutrient and its primary application is in fertiliser production by phosphate compounds. Just when there are cycles of biological carbon and nitrogen, there is a phosphorus cycle as well. In making protective matches (red phosphorus), pyrotechnics and explosive bombs, phosphorus is included.