Grignard reagents are extremely useful organometallic compounds in the field of organic chemistry. They exhibit strong nucleophilic qualities and also have the ability to form new carbon-carbon bonds. Therefore, they display qualities that are also exhibited by organolithium reagents and the two reagents are considered similar.

When the alkyl group attached to a Grignard reagent is replaced by an amido group, the resulting compound is called a Hauser base. These compounds are even more nucleophilic than their Grignard counterparts.

What are Grignard Reagents?

A Grignard reagent is an organomagnesium compound which can be described by the chemical formula ‘R-Mg-X’ where R refers to an alkyl or aryl group and X refers to a halogen.

They are generally produced by reacting an aryl halide or an alkyl halide with magnesium.

These reagents were discovered by the French chemist Victor Grignard, who won the Nobel Prize in Chemistry in the year 1912 for his work on these compounds.

Grignard reagents (RMgX) are commonly used for organic synthesis. However, these highly reactive compounds are supplied inflammable solvents, which cause extra complexity in their transport. Herein we note that Grignard reagents with linear alkyl chains can be trapped and stabilized by the macrocyclic host pillar arene while retaining their reactivity.

Reactions that form carbon-carbon bonds are among the most beneficial to synthetic organic chemist. In 1912, Victor Grignard was awarded the Nobel Prize in Chemistry for his discovery of a new sequence of reactions resulting in the creation of a carbon-carbon bond. Grignard synthesis involves the preparation of an organomagnesium reagent through the reaction of an alkyl bromide with magnesium metal.

The process of preparing Grignard reagents is described in the points provided below. It can be noted that many of these reagents can also be purchased commercially.

An illustration detailing the preparation of these reagents is provided below.

The quality testing of the synthesized Grignard reagents is done via titrations involving protic reagents that do not contain water (since these reagents are highly sensitive to oxygen and water) and a colour indicator. One suitable compound for these titrations is methanol. 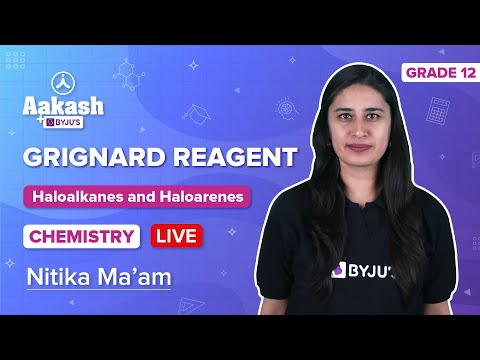 During a reaction involving Grignard reagents, it is necessary to ensure that no water is present which would otherwise cause the reagent to decompose rapidly. Therefore, the majority of Grignard reactions occur in solvents such as anhydrous diethyl ether or tetrahydrofuran because the oxygen in these solvents stabilizes the magnesium reagent.

Grignard reagents are very important reagents in organic chemistry since they can be reacted with a wide range of compounds to form different products. Some of the reactions of these reagents are listed below.

These reagents form various products when reacted with different carbonyl compounds. The most common reaction of Grignard reagents is the alkylation of ketones and aldehydes with the help of R-Mg-X.

This reaction depicted above is also referred to as the Grignard reaction. The solvents that are used in this reaction include tetrahydrofuran and diethyl ether.

For the formation of new carbon-heteroatom bonds, Grignard reagents and some organolithium compounds are very useful. These reagents can also undergo a transmetallation reaction with cadmium chloride, yielding dialkyl cadmium. This reaction can be written as follows.

Alkyl chains can be attached to many metals and metalloids with the help of these reagents.

Typically, these reagents are quite unreactive towards organic halides which highly contrasts their behaviour towards other halides. However, carbon-carbon coupling reactions occur with Grignard reagents acting as a reactant when a metal catalyst is introduced.

An example of such a coupling reaction is the reaction between methyl p-chlorobenzoate and nonyl magnesium bromide which yields the compound p-nonyl benzoic acid in the presence of the catalyst – Tris(acetylaceto) iron(III).

For the production of Tamoxifen, a type of medication used to prevent and treat breast cancer, the Grignard reagent is a vital part of the non-stereoselective process. An illustration detailing the Grignard reaction that takes place in the manufacturing process of tamoxifen can be found above.

Is a Grignard reagent an organometallic compound?

Grignard reaction is an organometallic chemical reaction in which alkyl, allyl, vinyl or aryl-magnesium halides (Grignard reagent) are added to the carbonyl group in aldehyde or ketone. This reaction is important for the formation of carbon-carbon bonds.

Why is mg used in Grignard reagent?

Grignard reagents are formed by the reaction of magnesium metal with alkyl or alkyl halides. They are wonderful nucleophiles, reacting with electrophiles such as carbonyl compounds (aldehydes, ketones, esters, carbon dioxide, etc.) and epoxides.

What happens when aldehyde reacts with Grignard reagent?

Organolithium or Grignard reagents react to alcohol in aldehydes or ketones with the carbonyl group C = O. Carbonyl substituents determine the essence of the alcohol component. The acidic work-up transforms the intermediate metal alkoxide salt into the desired alcohol by means of a simple acid-base reaction.

Do Grignard reagents react with ethers?

The bulk of Grignard reactions are conducted in ethereal solvents, in particular diethyl ether and THF. With the chelating diether dioxane, some Grignard reagents undergo a redistribution reaction to produce organomagnesium compounds.

To learn more about the Grignard reagent and other important reagents in organic chemistry, register with BYJU’S and download the mobile application on your smartphone.