What is Tollens Test?

Tollens Test is a very useful method to distinguish between aldehydes and ketones. This qualitative lab test is also referred to as the silver mirror test.

The Tollens Reagent is named after Bernhard Tollens, A German chemist who discovered this reagent and its uses. Tollens reagent is a solution of silver nitrate (AgNO3) and Ammonia (NH3). 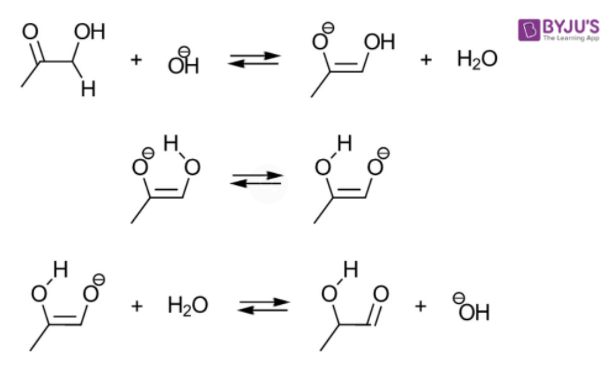 Since Tollens Reagent has a relatively short shelf life, the reagent is not commercially sold. Therefore, this reagent is often prepared directly in the laboratory. One such method for the preparation of Tollens Reagent is described below:

A few drops of dilute NaOH are introduced to an aqueous solution of silver nitrate. The aqueous solution of silver nitrate contain silver aquo complexes wherein water acts as a ligand. The hydroxide ions now convert these silver aquo complexes into silver oxides. This silver oxide (given by Ag2O) precipitates as a brown solid from this solution. The reaction can be written as follows.

The brown precipitate of silver oxide generated in step 1 is now dissolved with aqueous ammonia. The solution which formed from this addition of aqueous ammonia contains the [Ag(NH3)2]+ complex. This complex is the primary component of Tollens Reagent. The reaction can be written as:

When an aldehyde is introduced to the Tollens reagent, two things occur:

The aldehyde is oxidized by the Tollens reagent and forms a carboxylic acid. This reaction can be written as follows:

Tollens test is commonly referred to as the Silver Mirror test due to the formation of this layer of metallic silver on the test tube.

What is the alpha hydroxy ketone?

What does a tollens test do?

Tollens’ test, also known as silver-mirror test, is a qualitative laboratory test used to distinguish between an aldehyde and a ketone. It exploits the fact that aldehydes are readily oxidized (see oxidation), whereas ketones are not.

What color is a positive tollens test?

The formation of a dark grey precipitate or silver mirror on the bottom and sides of the test tube indicates a positive result, which means that the given sample contains reducing sugars/ aldoses.

What is Tollens test used for?

Tollens’ test, also known as silver-mirror test, is a qualitative laboratory test used to distinguish between an aldehyde and a ketone. It exploits the fact that aldehydes are readily oxidized (see oxidation), whereas ketones are not.